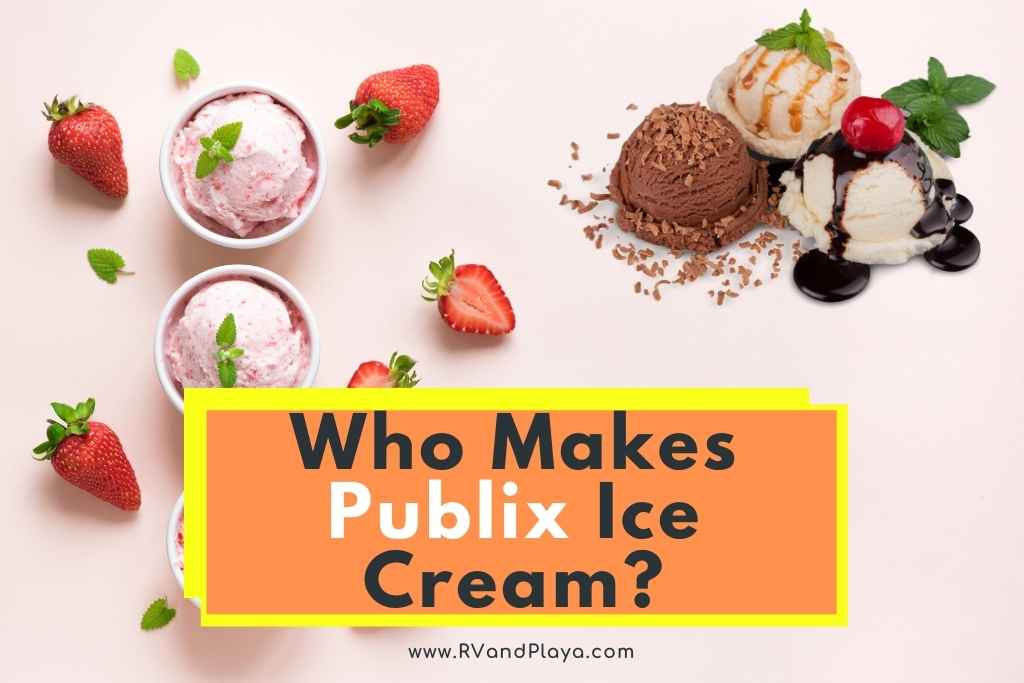 That begs the question: who makes Publix ice cream? Publix has been producing its own ice cream since 1980. In other words, Publix really does make Publix ice cream. Part of the reason Publix ice cream is so delicious is that it is actually manufactured by Publix at two dairy plants owned by the company.

The vast majority of companies that sell private labels do not make their own products. Instead, the company will hire another to produce the product.

So, there is very little difference between brands since they’re all produced in the same place anyway.

This is not the case with Publix Premium ice cream. Publix premium ice cream is actually produced by Publix. Publix owns two dairy manufacturing plants, one in Florida and the other in Georgia.

It is at these locations that Publix ice cream is produced and then shipped out to Publix locations around the country.

Publix is an American supermarket chain that is headquartered in Lakeland FL. It was opened in 1930, and it is now one of the most popular grocery chains in the southeastern United States.

Publix was founded by George W Jenkins 91 years ago. It is currently an employee-owned company, which means employees own shares in the company.

Employee stock ownership is more common in the UK than it is in the US. The current CEO is Todd Jones with Ed Crenshaw as a chairman.

Today, Publix has a revenue of $38.1 billion. It also employs 225,000 employees and offers event planning, money services, online shopping, home delivery, grocery, and real estate services. Of the food products that Publix sells, the Publix Premium ice cream is one of the most popular products.

The History Of Publix Ice Cream

Legend has it that Publix’s ex-president Mr. Joe Blanton loved ice cream so much that he had a dream of building a dairy plant responsible for creating Publix’s first private label ice cream.

Although we can’t say for certain why Mr. Blanton wanted a dairy plant, we do know that Publix ice cream was first produced under his tenure.

Back in 1980, Publix purchased the Lakeland dairy manufacturing plant where it began producing ice cream. As you might expect, chocolate and vanilla were the first flavors produced, but more flavors were added in 1982.

By 1995, the Atlanta dairy manufacturing plant also began producing public ice cream. Since then, both the Lakeland and Atlanta plants have been responsible for producing Publix ice cream. All frozen treats are still made at these facilities.

Since its creation in 1980, dozens of ice cream flavors have been produced at these locations. This includes flavors belonging to the limited edition, homemade style, light, artificial sweeteners, non-dairy, and frozen yogurt lines. In total, there are 120 different varieties of ice cream produced under the private label brand.

Today, Publix ice cream is as popular as ever. In order to keep up with the high demand for ice cream, both the Lakeland and Atlanta facilities are still used for ice cream and frozen treat production.

Obviously, Publix sells classic flavors, such as vanilla and ice cream. In fact, vanilla remains the company’s most popular flavor, which is pretty standard among all brands. Chocolate is a close second.

Even though vanilla is the most popular flavor worldwide, there is a reason why people love Publix Premium vanilla ice cream specifically. It is made the old-fashioned way without any corners being cut.

Milk and cream are the base ingredients, and all quality ingredients are selectively chosen to ensure the final product is delicious and creamy.

Believe it or not, Publix makes its own ice cream. In other words, the Publix Premium private label ice cream brand is actually produced at Publix-owned facilities located in Lakeland and Atlanta. Publix has always produced its own ice cream, and it appears it will continue doing so.

Because Publix takes the time to produce its own ice cream, Publix ice cream tends to be a favorite among ice cream lovers.

High-quality ingredients are mixed with superior craftsmanship to produce sweet, creamy, and delicious ice cream of many flavors.

To this day, Publix still produces its own private label ice cream, but the ice cream flavors change based on the season.

Some of the most popular ice cream flavors are the holiday special editions, which are only available between Thanksgiving and Christmas.

Despite these exotic flavors, vanilla is the number one ice cream flavor of the Publix Premium ice cream brand.

Most of the products on offer at Trader Joe’s are made by third-party manufacturers under their own branding for sale in their stores. The grocery store giant doesn’t have any factories of...