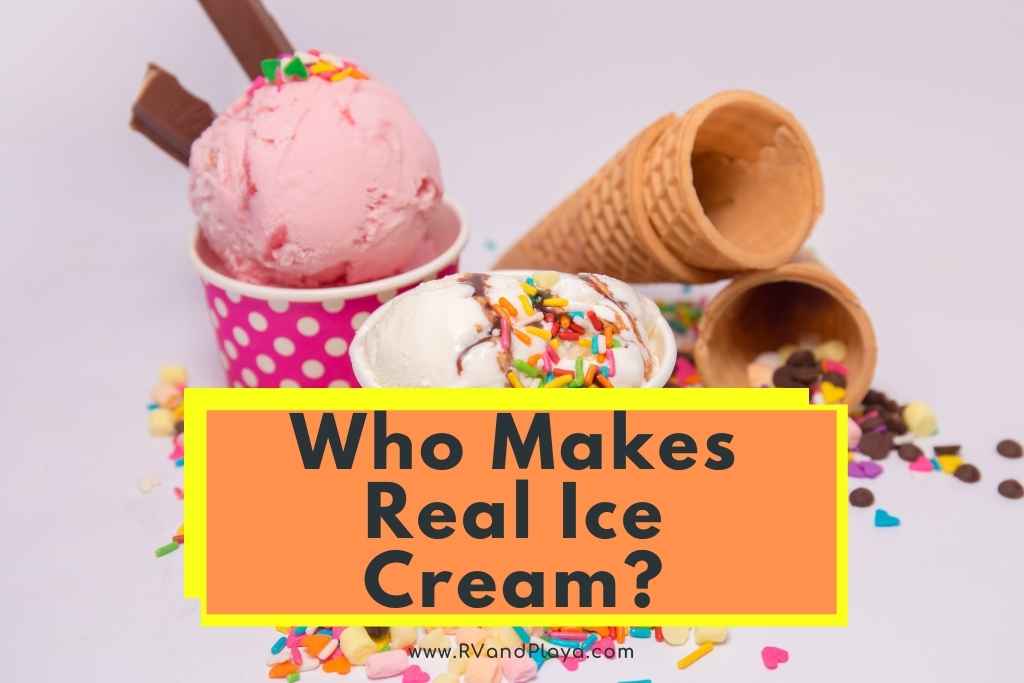 Do you know who makes the Real Ice cream? Or all-natural Ice cream? this is one of the questions our readers ask a lot. Well, we´ve got you covered.

When you’re looking for the tastiest ice cream out there you need to know whether you’re getting the real deal or a cheap knock-off.

If you want the best dessert for your money then you might be wondering, who makes real ice cream?

The difference between genuine ice cream and frozen dessert is that real ice cream is made from dairy products, which might include milk, cream, skim milk powder, or whey powder. Most of the famous ice cream companies, like Haagen-Dazs and Baskin Robbins, use real dairy milk but some other “ice creams” are really frozen desserts, because they use vegetable oils instead.

This article will tell you everything that you need to know about real ice cream so that you can differentiate between the genuine article and a frozen dessert alternative.

The easiest way to tell whether the ice cream that you are buying is the real thing or not is by checking the label.

The FDA set standards for what qualifies as real ice cream, and therefore which products can be described as such on the label.

If a product is labeled as ice cream it needs to contain at least 10%  dairy fat and if it doesn’t, then you will likely find it described as a “frozen dessert”. Frozen desserts are similar to ice creams, but they contain vegetable fats instead of dairy fats.

Real ice cream enthusiasts will tell you that dairy-based ice cream is much creamier and richer than a frozen dessert, but which one you actually prefer will come down to your own tastes.

There are many different types of ice cream and frozen desserts that can vary greatly in the quality of their ingredients and manufacturing.

There are a lot of famous companies that make real ice cream. They may not all make ice cream in the same way, but if it contains at least 10% dairy fats, then it is the real deal.

Some of the most popular real ice cream companies include:

In general, the more dairy fats that are used to make an ice cream, the creamier the end result will be. Additionally, some manufacturers will use a lot more additives like corn syrup and artificial coloring than others.

Just because frozen desserts don’t qualify as real ice cream, that doesn’t mean they are all inferior in taste or quality. Some frozen desserts may just be a cheaper way to emulate the real thing, but many companies are now specializing in delicious ice cream alternatives.

Though they may be a different treat, frozen desserts can be just as delicious and satisfying.

Frozen desserts are also becoming increasingly popular among people who want to avoid excess sugar or cut out dairy entirely.

Vegans, people who are lactose intolerant, and anybody who is trying to watch their waistline might well look to a frozen dessert instead of a traditional ice cream for their fix.

You can also get a lot of frozen desserts from traditional ice cream companies, but some of the nation’s favourite frozen dessert brands include:

So, we’ve covered the difference between frozen desserts and real ice cream, but where does gelato factor into things? Many people consider gelato to be the real standard of excellence when it comes to frozen desserts, but it’s more than just another name for the same treat.

In fact, it is said that gelato was first introduced to America by Italian immigrants in the 1770s, and it was changed to the production methods that created ice cream as we know it today.

You can still buy real gelato all over the United States, and you’ll find the best examples at a local Italian gelateria.

If you’ve ever tried gelato then you know that there is something distinctively different about the texture of it when compared to ice cream.

Gelato is much smoother and feels richer as a result, whereas ice cream is chunkier and has more air in the mixture.

What is the Difference Between How Real Ice Cream and Gelato Are Made?

The difference between the two recipes is actually not so much about the ingredients themselves; it is more about the proportions that are used and how they come together.

The main distinction, though, happens when the ingredients are churned together to turn them into a delicious frozen dessert. Gelato is turned much more slowly than ice cream, which means that less air is incorporated into the mixture.

This is a slower process, but it leads to a distinctively dense consistency.

The difference in the consistency between the two also means that gelato is usually stored at a temperature slightly above freezing, to maintain its silky texture.

The truth is that there are a lot of companies still making real ice cream in the United States. Blue Bunny, Haagen-Dazs, Baskin Robbins, Edy’s/Dryer’s, Ben & Jerry’s, Tillamook, and many more, sell real ice cream that is made with genuine dairy fats.

There are also a lot of frozen dessert options out there which use vegetable fats instead of milk or cream.

You can tell the difference by looking at the label. A product is not allowed to call itself “ice cream” in America if it does not contain at least 10% dairy fat.

If you’re really looking for the most traditional ice cream out there, though, then you might want to find yourself some genuine Italian gelato.

Spumoni is one of the best-kept secrets in the ice cream world. It is a much-beloved blend of delicious flavours that is quite unique among frozen desserts but there are quite a few different...