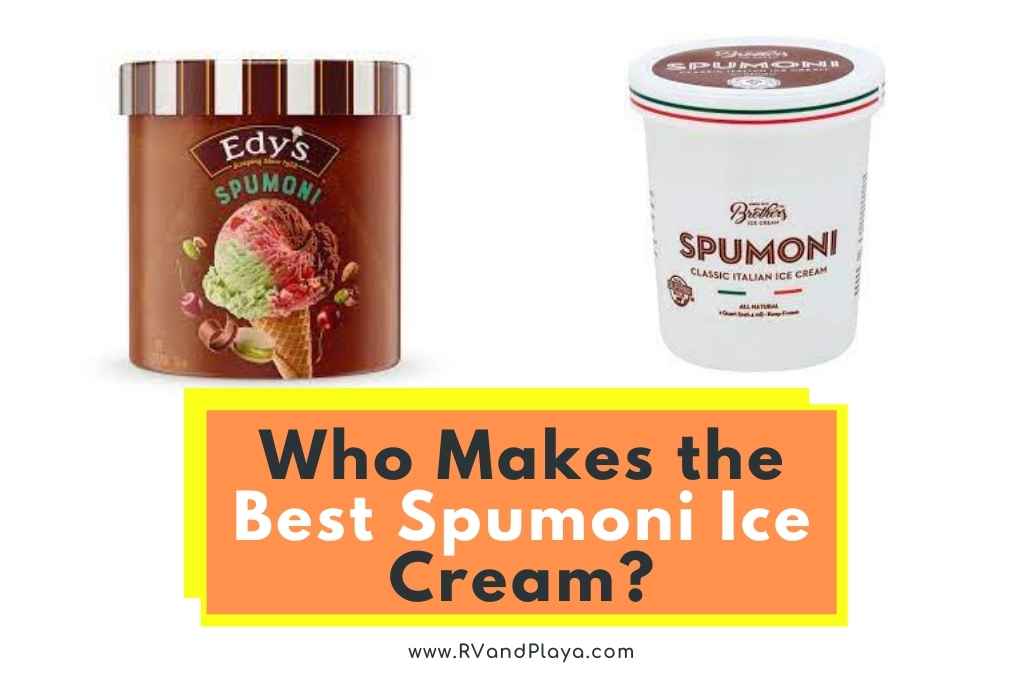 Spumoni is one of the best-kept secrets in the ice cream world. It is a much-beloved blend of delicious flavours that is quite unique among frozen desserts but there are quite a few different versions out there, so who makes the best spumoni ice cream?

If you’re looking to buy a tub at the grocery store, the most popular that you can find are probably the Edy’s/Dreyer’s or Brothers Desserts spumonis, which are both well-reviewed. It does depend, however, on exactly what you’re looking for from your spumoni. A local Italian market or restaurant is going to deliver something much closer to the genuine article.

This article will give you all the details about what spumoni ice cream is, how the American variation came to be, and where to find the best versions of this incredible dessert across the United States.

What is Spumoni Ice Cream?

It’s not the most recognisable name when it comes to frozen desserts, but spumoni is a well-loved treat in many different parts of the United States. It comes from a traditional Italian recipe that was then translated into the distinctive layered American version that most people know it as today.

The original spumoni, otherwise known as spumone, is a dessert from Naples, made from a sort of frozen mousse filled with candy, almonds, and bits of chocolate, that is covered by a layer of gelato.

The traditional spumoni is supposed to be served almost like a cake and sliced rather than scooped.

The spumoni that you usually find in America is somewhere between a sorbet and an ice cream, although a lot of generic brands simply use flavoured ice cream. What sets it apart most of all is that it is made up of different layers of flavour.

Spumoni was introduced to the United States around the start of the 20th century and quickly changed into a distinctly Americanized version.

What is the Difference Between Spumoni and Neapolitan Ice Cream?

Now perhaps the better known of the two desserts, Neapolitan ice cream is essentially the most popular Americanized version of spumoni.

After spumoni was brought over by immigrants from Naples, Americans began referring to any layered ice cream dessert as “Neapolitan-style”, which eventually became the official term for America’s favourite combination: chocolate, vanilla, and strawberry.

If you are looking for the classic spumoni in the states today, it will consist of three flavours of ice cream: cherry, pistachio and either chocolate or vanilla.

Usually, there will also be delicious additions mixed in with the ice cream as well, like chopped up fruit, nuts, and chunks of chocolate.

The much more American version of spumoni-style ice cream is known as Neapolitan. This is simply a layered ice cream consisting of chocolate, strawberry, and vanilla flavours.

Often, you will find Neapolitan ice cream in a layered block rather than swirled together and scooped, which is reminiscent of the more traditional, Italian serving style.

Can You Buy Spumoni at the Supermarket?

Spumoni is a dessert that is a bit more specialized than traditional ice cream and there are not very many brands which make it to be sold in grocery stores around the country.

There are, however, a few labels that you might see more often.

Spumoni that you might find in the frozen desserts aisle at the grocery store includes:

The more generic tubs that you find at stores like Dave’s or Kroger’s are usually lower quality and less well-reviewed.

Of the commonly available mass-marketed spumoni options, Edy’s/Dreyer’s spumoni (which are both made by the same company, just marketed differently depending on your location) is a delicious brand that is likely to be easy to find.

If you’re looking for the best spumoni that is widely distributed and available in many stores around the country, the spumoni from Brothers Desserts is probably the most authentic and best-loved out there.

What is the Best Spumoni Ice Cream You Can Buy?

If you’re really looking for the highest quality spumoni, or the most authentic, you can’t expect to find it in the freezer at a big supermarket.

Like gelato or traditional ice cream, the best places to buy your spumoni will be local markets, restaurants, or specialist stores.

To get the most authentic experience, you should seek out an Italian market near you, a local Italian restaurant, or an Italian ice cream parlour (or gelateria) that specialises in spumoni.

Fortunately, there are quite a few to choose from if you are in the right parts of the country.

Some of the best-reviewed locations for buying spumoni that you can find across the United States include:

The Truth: Who Makes the Best Spumoni Ice Cream?

The truth is that the best spumoni ice cream you are going to find will be in a specialist Italian market, ice cream shop, or restaurant.

If you’re looking for more generic spumoni in a tub at the grocery store, then Edy’s/Dreyer’s spumoni and Brothers Desserts’ spumoni are both great options.

Though originally a very Italian dessert, spumoni has taken on a life of its own in the United States and there are many delicious versions of it all over the country.

Some are more authentic than others (sticking more closely to the traditional recipe) but they are all sweet treats that Americans can’t get enough of.