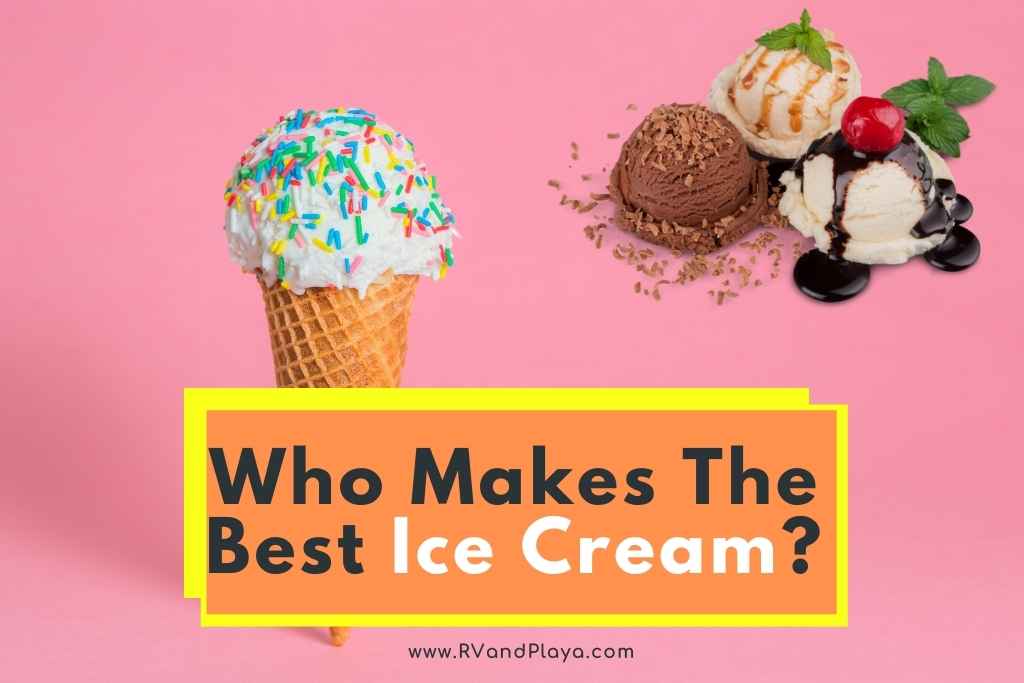 There are dozens of ice cream brands available. If you are an ice cream snob, you likely want to pick the best one, but which brand really makes the best ice cream?

So, who makes the best ice cream? The list below shows Ice cream brands that are often considered to be the best Ice Cream brands available right now. Which included:

As for the manufacturer, Unilever is typically the best because so many top brands are produced by this company.

To learn more about the top ice cream brands and manufacturers, keep reading.

Deciding who makes the best ice cream is no small task. Not only is this issue subjective, but there are dozens if not hundreds of ice cream brands to choose from.

Needless to say, this article is a tough one to write. Even so, we have tackled the issue.

First up on our list is Ben & Jerry’s. Ben & Jerry’s produces a number of delicious, original flavors, such as Netflix and Chill’d and Chocolate Fudge Brownie. They also produce some dairy-free options for individuals who are allergic to dairy.

Another reason why Ben & Jerry’s is such a great brand is that they advocate for a more sustainable future. They protest against major environmental problems, such as Arctic drilling and growth hormones used in dairy products.

Talenti is technically a gelato brand, but it produces some of the best ice cream sweet treats around. The idea behind this brand is to introduce the old school are continuing way of making gelato and introducing it to the United States.

All Talenti products include authentic ingredients and slow cooking so that the final product is delicious and tasty.

The flavors are rich and smooth, and the ingredients are sourced from some of the best locations, including pistachios from California and vanilla from Madagascar.

Blue Bell is one of the oldest ice cream brands and with good reason. In fact, you can trace Blue Bell all the way to the early 1900s when the company first came about.

It consistently makes delicious flavors and it distributes them all around the globe.

Today, Blue Bell can be found practically everywhere. It has all-around favorite flavors, such as Cherry Vanilla and Chocolate Chip, but they also offer unique flavors based on the season and location. Plus, you don’t have to look too far to find this brand at a store near you.

Tillamook is a company that produces a variety of dairy products, including cheese, yogurt, and ice cream. This company has been open since 1909 when it worked with family dairy farmers.

Today, the company is still around and is loved for its unique options.

For example, Tillamook produces unique flavors, such as Honeycomb Toffee and Mountain Huckleberry. They even produce some dairy-free sorbets for individuals who have dairy sensitivities or allergies.

There is a reason for that. Baskin Robbins produces some of the tastiest ice cream and has over 1400 flavors on its menu worldwide.

If you’ve never been to Baskin Robbins before, you can visit the store and get an ice cream cone, but you could also purchase tubs of ice cream at grocery stores or at Baskin Robbins locations. The choice is yours.

Unilever is considered the number one ice cream manufacturer in the world. It produces a number of major ice cream brands, some of which are on our list. Some ice cream produced by Unilever includes Ben & Jerry’s, Breyers, Fudgsicle, Klondike, Magnum, and Talenti.

Unilever is known for more than just its ice cream. The company is worth billions of dollars and it has hundreds of brands under its umbrella.

It has products in the food and refreshment, detergent, cleaning products, beauty, and personal care sectors.

In other words, Unilever is a multinational consumer goods company. Even though it is headquartered in London, England, it has locations all over the globe.

It dates all the way back to 1929, and it does not look like it is going anywhere into the future.

It’s impossible to say which ice cream brands are the best since this is a subjective matter. However, Ben & Jerry’s, Talenti, bluebell, Tillamook, and Baskin Robbins tend to be the top ice cream brands. They taste delicious, have been around for a long time, have great reviews, and have tons of flavors to try out.

Aside from the brands, you can also gauge the best ice cream based on the manufacturer. The top ice cream manufacturer in the world is Unilever.

Unilever is responsible for several of the ice cream brands on our list, as well as dozens of others. That is why Unilever is considered the best ice cream manufacturer worldwide.

Now that you have some ideas about the best ice cream brands, you should go out and taste test them to decide for yourself which ice cream is the best!

Most of the products on offer at Trader Joe’s are made by third-party manufacturers under their own branding for sale in their stores. The grocery store giant doesn’t have any factories of...