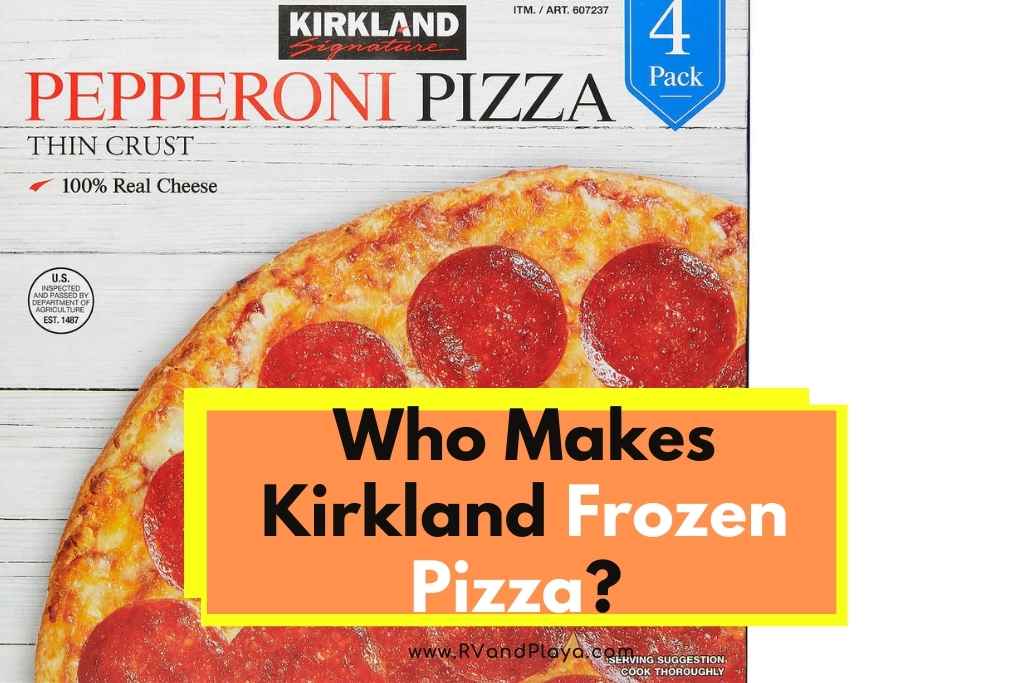 Lindsey, do you know who makes Kirkland frozen pizza? This is one of the questions our readers ask a lot. Well, we´ve got you covered.

Costco sells two types of frozen pizza under their Kirkland Signature private label: Cheese and pepperoni. These two classics are a favorite among Costco members.

So, who makes Kirkland frozen pizza? Costco likely has their frozen pizzas made by Palermo Pizza. Palermo is a pizzeria and frozen pizza manufacturer located in Milwaukie, Wisconsin. They were linked to Costco in 2012 due to a labor strike from Palermo employees where Costco was urged to take action due to their partnership with Palermo.

In this article we will discuss the Palermo pizza brand and how they’ve been linked as a supplier to Costco.

Who Is Palermo Pizza?

Palermo Pizza actually started as a bakery back in 1964 selling Italian bread, cannolis, and cookies, and eventually expanded into soups and sandwiches. It wasn’t until 1969 that they expanded into the pizza business when they opened a pizzeria and restaurant.

Their pizza was recognized by a local grocery store owner who encouraged them to start experimenting with frozen foods. Palermo then purchased an old bakery and renovated it into a manufacturing facility in 1979 to start making frozen pizzas.

Palermo made waves in the frozen pizza industry by being the first to introduce a frozen pizza with a crust that rises while it bakes.

This catapulted Palermo into frozen pizza fame. They currently sell a wide variety of their own branded pizzas.

Which Brands of Pizza Does Palermo Sell?

These brands are available in grocery stores all across the U.S. and are extremely popular. You’ve likely seen them while browsing the frozen food aisles.

However, you may be wondering, what about Kirkland pizza?

Is Palermo Pizza Involved In The Private Label Business?

Palermo entered the private label manufacturing business in 1993! They have a research and development team that works to develop products for each private label they work with.

In fact, Palermo has over 300 recipes that they manufacture, but only 45 of them are for their branded pizzas. The rest are made for private labels!

They market themselves as pioneers! Which is accurate considering they were not only the first company to make a frozen pizza that has a rising crust when baked, but they were also the first to introduce ultra-thin crust and hearth-baked crust.

They are a popular partner for private labels as the retailers know that they will provide high-quality pizzas and are committed to making products to suit consumers’ needs as they change over time.

How Is Palermo Pizza Connected To Costco?

Well, we know that Palermo works with private labels, but unfortunately, they have declined to say who their partners were in the past. However, in 2012 Palermo was faced with some troubling issues.

They had around 100 of their workers go on strike to protest against Palermo Pizza firing of some of their immigrant workforce.

During this boycott, Costco’s name got dragged into the press. A few months after the workers went on strike, they decided to visit the Costco Wholesale Headquarters due to their affiliation with Palermo Pizza.

Their reasoning was that Costco is the largest retailer of Palermo Pizza and their Kirkland frozen pizza is one of the largest private labels that Palermo workers produced.

The workers were asking Costco to put pressure on Palermo Pizza to settle the dispute with their workers or risk losing their largest customer.

Why Would Costco Support A Boycott Against Palermo?

Workers boycotting Palermo pizza products were urging Costco to help solve this dispute due to Costco’s supplier code of conduct that guides the companies they partner with for their Kirkland Signature brand.

Costco holds all of their partners to high standards, which includes protecting the workers who are producing their merchandise.

Costco did initiate an investigation at the time into the Palermo boycott, however, they declined to make a public comment on the issue.

While we can’t definitely say why they didn’t make a public comment, we can speculate that they didn’t want to confirm the rumors of them being associated with Palermo.

Costco likes to keep their partnerships for their private label undisclosed to the public, and perhaps this is a good example of why.

Was The Boycott Resolved?

If you’re feeling hesitant about supporting Palermo Pizza after this information, and therefore hesitant about buying Kirkland Pizza, we are here to alleviate these worries. Although the boycott was a major issue, Palermo Pizza was mostly cleared by the National Labor Relations Board after an investigation was carried out against them.

It was determined they had acted lawfully when they terminated the immigrant workers, which was the major complaint behind the boycott.

However, they did face other charges from the NLRB and OSHA. They remedied these mistakes and agreed to allow the workers to unionize, which was a win for Palermo Pizza employees.

There isn’t a lot of information about where Palermo Pizza stands with its workers now, however, we can assume that Costco has done their own research into the issue and has determined that they still feel comfortable partnering with Palermo Pizza.

Read also>> Who Makes Kirkland Salsa? (All You Need To Know!)

Kirkland Pizza is likely made by Palermo Pizza, a company who prides themselves on their innovative and delicious frozen pizza.

Palermo sells their own branded pizzas and works with many private labels across the United States.

Although Palermo has faced issues regarding the treatment of their employees, they have largely come back from these issues and are seemingly taking steps to provide a better work environment.

Costco only supports companies that treat their workers fairly, so we can assume Costco has done their own private investigation into Palermo and determined they were happy to continue a partnership.