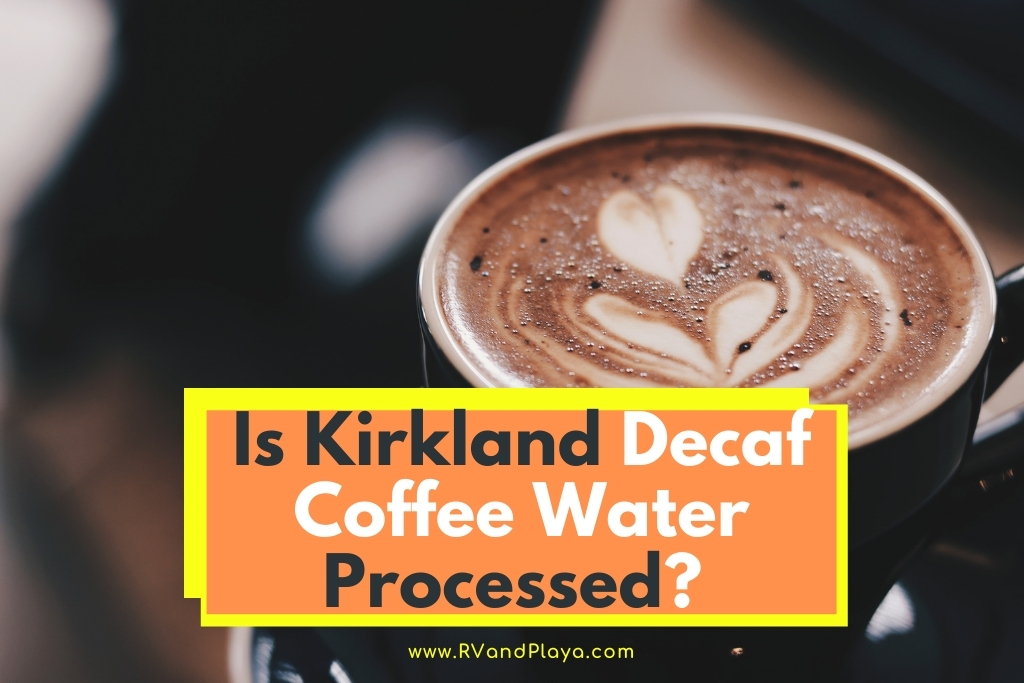 Three methods are commonly used to decaffeinate coffee. One is by water processing. Another is through the use of chemical solvents. And a final method requires carbon dioxide.

While the carbon dioxide method removes the most caffeine from the beans in most cases, the most natural way to do it is through water processing.

In this article, we’ll look at this specific decaffeination process. We’ll talk about whether this method is safe, as well as how successful it is or isn’t at removing all of the caffeine from coffee beans. We’ll also look at the details of Kirkland decaf coffee before wrapping things up.

So, read on to find out what methylene chloride is and how it affects the coffee beans.

Decaffeination with a Chemical Solvent

Coffee producers decaffeinate beans by using some sort of solvent. Water is sometimes the chosen solvent. However, many in the coffee industry opt for solvents that are more appropriate for dissolving caffeine specifically.

Chemical solvents, such as ethyl acetate, methylene chloride, or supercritical carbon dioxide work particularly well for making caffeine soluble enough to be extracted from the coffee beans. Generally, the process starts with wetting the beans.

Then, the chosen solvent is circulated around the beans long enough to pull the caffeine out of the coffee.

The process is repeated until there is little to no caffeine left.

Starbucks uses the direct contact method for removing the caffeine from coffee beans.

Green coffee beans are first soaked in water. Methylene chloride is introduced into the water and circulated throughout all the beans. The solvent is allowed to directly contact the green coffee beans during the circulation process.

The direct contact results in bonds between the caffeine and the methylene chloride which allows the solvent to pull the caffeine out of the coffee bean.

The caffeine then dissolves into the solvent and water mixture.

Once the caffeine is soluble and sitting in the solvent liquid, the beans then get roasted or boiled. The water/solvent mixture gets roasted with the beans.

Methylene chloride boils at 114º F. Coffee beans are roasted at temperatures upwards of 400º F. All the liquid solvent evaporates taking the caffeine with it.

Here is one of the best organic decaf coffees. Just click the link to Amazon and see the current price.

What Is Methylene Chloride?

Methylene chloride is a chemical that’s used widely as a solvent. It’s sometimes referred to as dichloromethane and DCM. One of its common uses is in paint remover. It works well to strip paint.

Questions arise about the safety of methylene chloride. Let’s look at that next.

How Safe Is Methylene Chloride as a Solvent for Decaf Coffee?

Methylene chloride has been linked to some cancers, asphyxiation, and cognitive issues. These are serious safety concerns.

Kirkland and Starbucks decaf coffees are roasted at temperatures above 400º F after their exposure to methylene chloride during the decaffeination process.

All of the solvent liquid is evaporated through boiling and roasting.

Tests show there’s no trace of methylene chloride left on the beans after roasting. Consumers are not at any risk of ingesting the solvent or experiencing any type of exposure to the chemical.

Read also: How Much Caffeine Is in Decaf Espresso? (Starbucks, Caffeine-Free)

Risk of Exposure to Workers

There is cause for concern when it comes to workers involved in the decaffeination process. The fumes produced during solvent mixing and the boiling could potentially cause issues with skin and respiratory functions.

Workers need to be protected from methylene chloride exposure with appropriate safety gear.

All nearby employees should wear a sealed suit, goggles, and a mask to eliminate any risk of exposure.

Does the Direct Contact Solvent Process Remove All Caffeine?

The truth is, decaffeination methods usually don’t remove 100% of the caffeine present in coffee beans. Generally, these methods remove anywhere from 94 to 99% of the caffeine.

Almost all decaf coffee has a minute level of caffeine in it. The amounts vary across different brands. They can also vary from cup to cup made from the same batch of beans.

It’s important to note that decaf and caffeine-free don’t mean the same thing. Decaf means the product went through a decaffeination process.

Caffeine-free means there was never any caffeine present.

Kirkland decaf coffee is not decaffeinated through water processing. The process starts with the green coffee beans soaking in water.

But a chemical solvent, methylene chloride, is introduced and allowed to make direct contact with the beans to extract the caffeine.

Though methylene chloride is known to be harmful in some cases, this process leaves none of the solvent behind, so there is no risk to consumers.

link to How Much Caffeine Is in Decaf Espresso? (Starbucks, Lavazza, Nespresso, Caffeine-Free)

K-Cups have revolutionized the way that we make coffee at home. With the ability to make a single serving of coffee in just a few minutes and choose from your favorite flavors, there is a lot to...