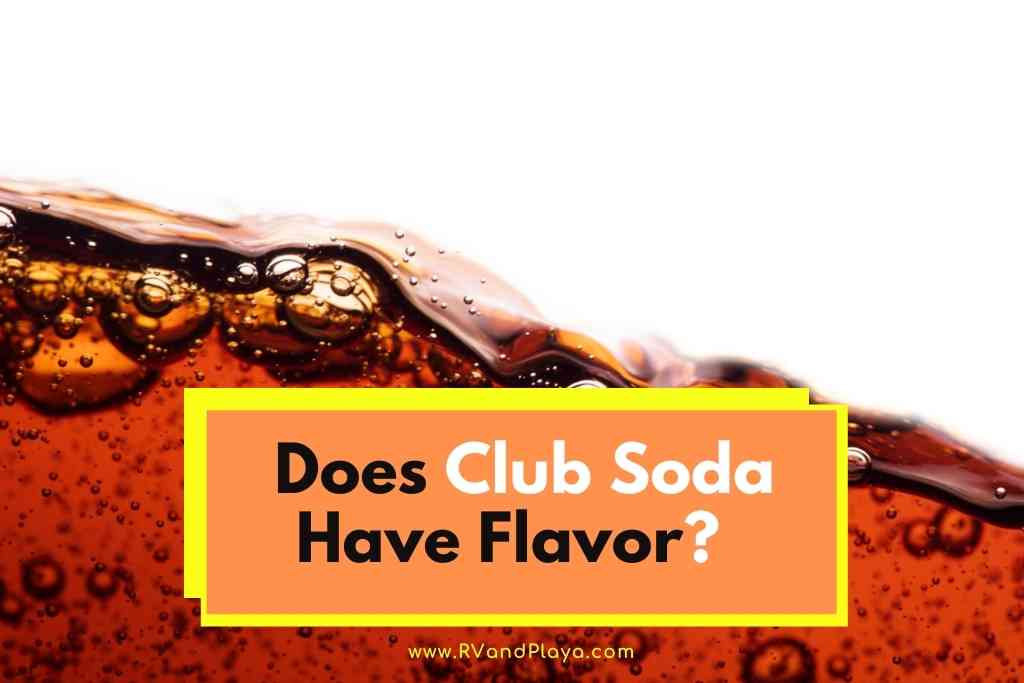 Have you ever asked yourself if Club Soda have flavor? Well, we´ve got you covered.

Club soda is also similar to other drinks that are available. This includes tonic water and seltzer water. All three of these are made from carbonated water and they are all meant to have a neutral taste, although tonic water is the most bitter of the three.

Club soda is a popular healthy alternative because of the lack of harmful nutritional value for the drink. That’s not all though. This quick guide will tell you everything you need to know about club soda.

What Is Club Soda?

Club soda is similar to tonic water and seltzer water, but each one is made differently. They are also often used in different drinks.

Club soda is carbonated water that has compounds added to enhance its taste. The compounds that are added can vary from brand to brand, but there are a few common ones. You can often find sodium bicarbonate (baking soda), sodium chloride, and potassium sulfate in club soda, among other compounds.

Club soda does not have any calories and it has no caffeine either. However, the sodium content can vary wildly from brand to brand and depending on how much of a serving is used.

However, you usually do not have to worry about consuming too much sodium because most brands have less than five percent of your recommended daily sodium intake.

Read Also: Does Club Soda Have an Expiration Date? (The Truth!)

What Are Some of The Flavors of Club Soda?

Club soda is usually seen as a stronger version of seltzer water. This water usually includes sodium salts and possibly potassium salts. These sometimes include table salt and baking soda. Sometimes these salts appear alone in the water.

The reason why these salts are added to the mineral water is that they are trying to reduce acidity and imitate the flavor of natural water. The goal of club soda is to give it the most neutral flavor possible.

What Drinks Use Club Soda as An Ingredient?

There are a lot of popular alcoholic cocktails that use club soda as a primary ingredient. Some of these include the Tom Collins, a Paloma, and a gin rickey, among others.

There are also non-alcoholic beverages such as a bubbly lemonade or an Italian soda that also use club soda as a primary ingredient.

Is Seltzer Water the Same as Club Soda?

Seltzer water and club soda taste very similar to each other, and they are sometimes used interchangeably. They are slightly different, however, and there are effects on how they are made and how they taste.

Because there are no additives, there are also no sugar or calories in a can of seltzer water. Because it has a similar neutral taste to club soda, seltzer water is a popular base for different alcoholic drinks. In fact, hard seltzers have become increasingly popular over the last few years.

Seltzer water has a similar taste to club soda, but it is fizzier. It has a clean and simple taste that gives you a healthy alternative to regular soda.

Does Club Soda Taste the Same As Tonic Water?

Tonic water is another common beverage that has a similar taste to club soda. The primary difference between them is that tonic water has a more bitter taste. It is carbonated water that also contains quinine.

Some brands of tonic water also have sugar added to it to balance out the bitter taste of the quinine. This usually gives the tonic water a bittersweet flavor.

Read Also: Does Club Soda Have a Taste? (Same As Water? – Real FACTS!)

Tonic water was actually invented for medical purposes. It was originally created as a way for the U.S. Military to treat returning soldiers with malaria. Since then, tonic water has become a popular mixer in alcoholic beverages.

Some of the mixed drinks that call for tonic water are the vodka tonic and the gin tonic. Others include Royal Tea and Vermouth Cassis. The bitterness of tonic water is considered an especially good balance to the burn of hard liquor.

In What Ways Does Club Soda Taste Different from Tonic Water?

There are a few different ways that club soda tastes different from tonic water. The first difference in taste comes from the different additives that the manufacturer uses. Both drinks dissolve carbon dioxide in order to give them their carbonation.

After this though, each drink gets a different additive. Tonic water manufacturers add quinine, which gives the drink a bitter taste. Club soda manufacturers on the other hand add minerals to the drink that imitate the minerals found in natural water.

Because of this, club soda had a much more mild and salty taste than tonic water does. Some manufacturers will add sugar to the tonic water to give it a more bittersweet flavor.

Club soda is a type of carbonated water that is often used as an alternative to regular soda, and as a mixer for alcoholic beverages. Club soda is similar in composition to drinks such as tonic water and seltzer water, but there are slight differences between them.

Club soda does have a taste. It is a mild, neutral taste with a hint of saltiness. There are lots of different recipes to make club soda and the exact taste depends on the recipe being used.

link to Does Club Soda Have Sugar? (Carbs In Club Soda – The Truth!)

Do you know if Club Soda has Sugar or if Club soda is sweet? these are questions our readers ask a lot. Well, we´ve got you covered. You want to find a drink with a little more kick than regular...

Do you know if Club Soda can hydrate you? this is one of the questions our readers ask a lot. Well, we´ve got you covered. Staying hydrated is one of the most important things we can do for our...