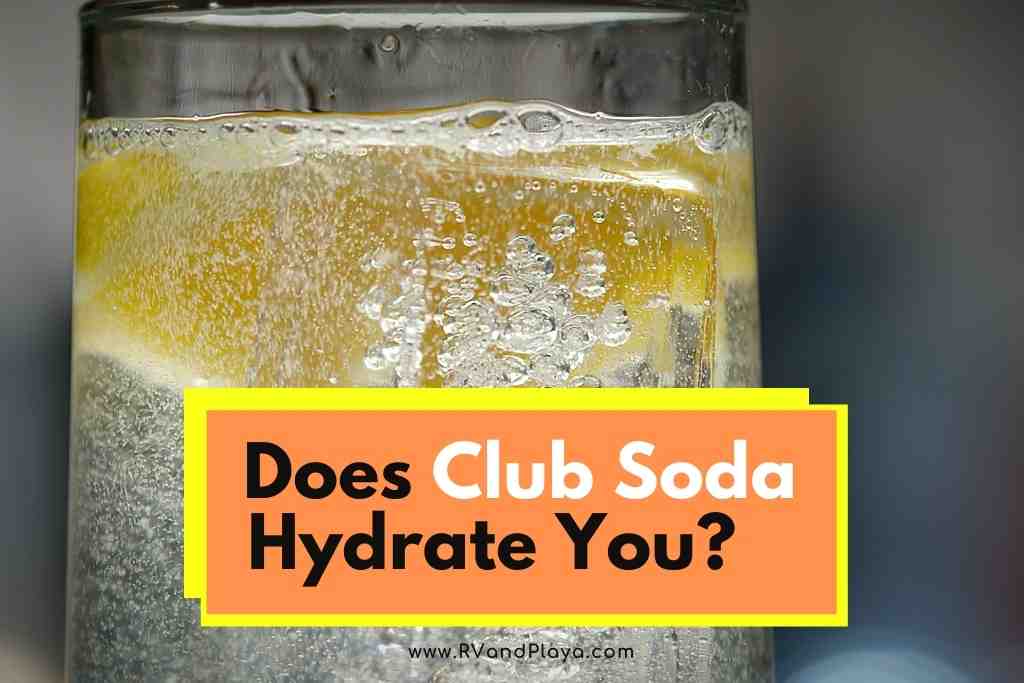 Do you know if Club Soda can hydrate you? this is one of the questions our readers ask a lot. Well, we´ve got you covered.

Staying hydrated is one of the most important things we can do for our bodies on a daily basis. Getting plenty of water keeps your brain sharp, helps keep you energized, and supports healthy bodily functions like digestion and more.

Although plain water is the most ideal source for hydration, you do have some other, less boring, hydrating beverage options available.

In this article, we’ll explain why club soda is nearly just as hydrating as regular water. We’ll also share tips on staying hydrated when choosing this drink. Read on to learn more about it.

One of the main reasons that club soda makes a good hydrating alternative to water is that club soda’s main ingredient is water. That’s right, club soda is simply water with CO2 added in, as well as a few mineral additives.

For example, when we look at the ingredients list for Schweppes club soda (one of the most famous brands of club soda), we find carbonated water, salt, potassium sulfate, and sodium bicarbonate.

The 95 mg of sodium per serving represents only 4% of your daily value, which means that it’s not going to have a huge effect on your sodium intake.

Since it’s basically all water, you can hydrate with this beverage like you would with bottled water.

Click the link to Amazon and get The Best Club Soda Today!

While drinking club soda is almost the same as drinking plain water, there are still some ways to optimize your intake. Hydrating with club soda is simpler and more natural if you:

Read also: Which Decaf Coffee Has The Least Caffeine? (Explained)

Pros and Cons of Hydrating with Club Soda

While hydrating with club soda proves to be almost as good as water hydration, there are still disadvantages in comparison.

Take a look at the main pros and cons below.

One big advantage of hydrating with club soda is that it’s a mild go-between for colas and regular water.

Many people avoid drinking water because it’s plain and less satisfying than, say, Coca-Cola. However, club soda is nearly just as healthy as plain water.

Without all the added caffeine and sugar of colas, you can stay hydrated and still enjoy a bubbly drink.

Further, club sodas won’t have as big of an effect on your teeth, making erosion much less intense than you would have with colas.

The other main advantage of drinking club soda instead of water is that it generally tastes better. Since club soda is bubbly, it has that enjoyable and refreshing texture.

And since it has minerals and salt added, it has a bit of a salty taste to keep you wanting more.

One con is that club sodas usually have added minerals to give them a light flavor.

The most common additive is sodium (sodium chloride), which is why many club sodas taste slightly salty when you drink them.

One potential downside of the added sodium is that it may not be conducive to your diet, especially if your doctor tells you to consume less sodium.

Further, some say that carbonated beverages are bad for your teeth. This is definitely true when it comes to sugary colas like Coke and Mountain Dew.

However, club soda is not nearly as acidic as regular soda, so the effect on teeth is less with club soda. However, it’s still there.

While the best possible way to stay hydrated is to just drink plenty of water, many people want a more satisfying alternative.

Lucky enough, club soda can be that healthy alternative to plain water.

Since club soda is just carbonated water with just a little bit of salt, it’s almost just as effective as plain water to hydrate you.

Just be sure to drink as much of it as you would plain water, and watch the sodium, as it can add up.

Do you know who makes Costco Kirkland sparkling water?  this is one of the questions our readers ask a lot. Well, we´ve got you covered. The Costco supermarket chain has been bringing...

Continue Reading
link to How Many Cups of Water Make a Liter? (Liters to Cups Conversion)

Have you ever wondered how many cups of water make a liter? If you are baking, cooking, or doing a science experiment that uses liters, but your measuring cups only measure cups, you have...