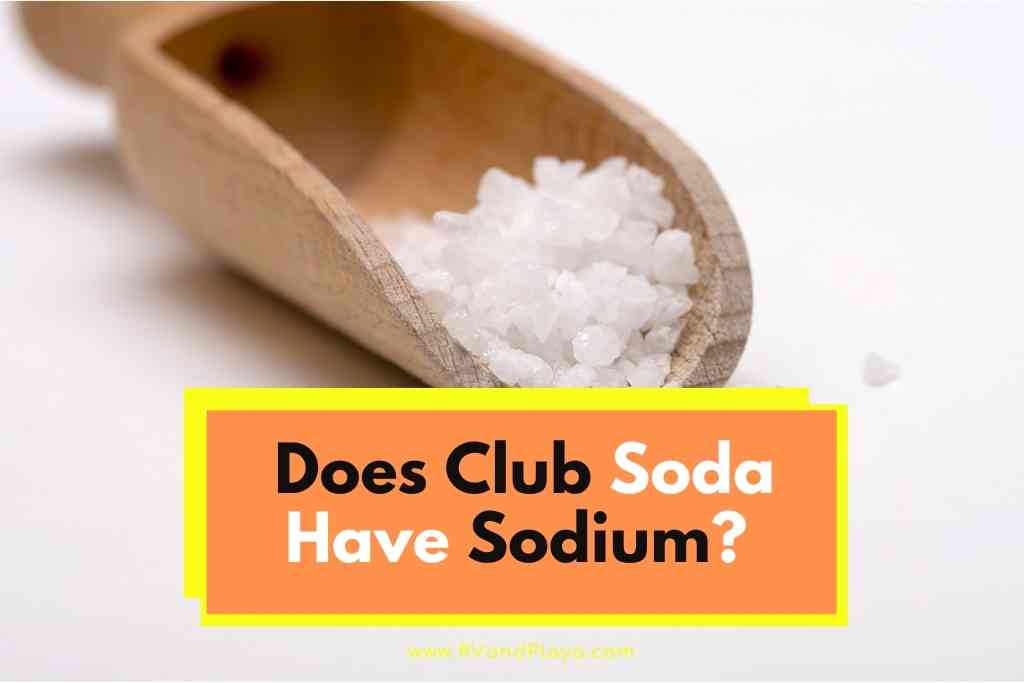 Have you ever asked yourself if Club Soda has Sodium? Well, we´ve got you covered.

Sodium is what gives club soda its flavor. The various salts and baking soda that are added to club soda after the carbonation process give club soda a flavor that is meant to replicate the taste of natural water.

So, does Club Soda have Sodium? Yes, Club soda does have sodium in it. Sodium is actually one of the critical ingredients that makes club soda club soda. Even though sodium gives club soda its distinctive flavor, there is a relatively small amount of sodium in a can of club soda. A single can is just a fraction of the nutritionally recommended daily intake.

This neutral flavor also means that club soda is also a popular option to mix with alcoholic beverages. There are endless recipes of classic mixed drinks that call for club soda.

Does Club Soda Have Sodium?

Club soda does have sodium, but it is a relatively low amount. Club soda has roughly 75 milligrams of sodium per can or bottle, which is less than ten percent of the recommended daily intake.

There is a relatively significant amount of sodium in a can of club soda because this is one of the most important ingredients that make club soda club soda. The sodium comes from the salts that are added to club soda to give it its flavor.

What Is Club Soda?

Club soda is a type of beverage that consists of carbonated water with salts added to it.

This is a popular choice for people who want a healthier alternative to drinking regular soda pop. It is also a popular way for people to mix their alcoholic beverages. Club soda is considered to have a neutral taste, so it mixes well with almost anything.

Club soda has some similarities to other drinks such as seltzer water and tonic water. All three of these drinks are made from carbonated water. However, the final recipe for making them varies, giving them each a different taste.

Seltzer water and club soda are very similar, seltzer is just a little bit fizzier. This is because seltzer water is carbonated water that has no additives in it.

Read Also: Does Club Soda Have a Taste? (Same As Water? – Real FACTS!)

Club soda, on the other hand, does have additives. There are compounds such as sodium and baking soda that appear in club soda, in an attempt to have the drink imitate the flavor of natural water that you would find in the wild.

The exact ingredients that are used as additives in club soda vary from company to company and batch to batch. However, these additives are usually some sort of salts such as potassium sulfate, sodium chloride, or sodium bicarbonate. Sometimes table salt is also used as an additive to club soda.

Of the three drinks listed above that all come from carbonated water, club soda is usually the only one with any sodium in it.

Seltzer water has no additives and the primary additive in tonic water is quinine. Quinine leaves tonic water with a bitter flavor and companies will normally put sweet-tasting compounds in tonic water to try to balance the taste out.

Should You Be Worried About Sodium Level?

Unless your doctor has told you that you need to watch your sodium intake, you probably do not need to worry about the level of sodium present in club soda.

There is only an average of seventy-five milligrams of sodium in an average can of club soda. This is less than ten percent of the recommended daily intake of sodium.

As long as you are drinking your club sodas in moderation, or if you have been warned by a doctor to stop drinking them, you do not need to worry about the sodium in club soda being unhealthy for you.

One suggestion to get the most out of your club soda without increasing the sodium content is to drink your club soda by itself without mixing in any other drinks.

This is especially true when it comes to mixing alcoholic beverages. Instead, drink the club soda plain with just a piece of fresh fruit squeezed into the cup to give it a natural flavor without adding any sodium to it.

Does Sodium Affect the Taste of Club Soda?

Sodium does impact the taste of club soda. The sodium in club soda comes from the salts that are added to the beverage after carbonization. This is an attempt to make the beverage taste less like soda and more like natural water.

If these other drinks had salt added to them, they would taste more like club soda.

Club soda is a popular mixer to use when pouring alcoholic cocktails because it has a neutral flavor that almost tastes like water. The reason why club soda has this neutral flavor is because of the alkaline salts and baking soda that are added to the mixture after the water has been carbonized.

Sodium is an important ingredient in club soda, but club soda is still considered to be a relatively low sodium drink. A can of club soda has roughly seventy-five milligrams of sodium in it, which is much lower than the recommended daily intake.

link to Does La Croix Hydrate You? (Seltzer, Sparkling Water)

Have you ever asked yourself or your friend if drinking seltzer water like LaCroix hydrate you as good as drinking water? Well, you are at the perfect place to find the answer to such a...

Have you ever asked yourself or your friend if carbonated water bloat you? Well, you are at the perfect place to find the answer to such a question. Carbonated beverages have been associated with...