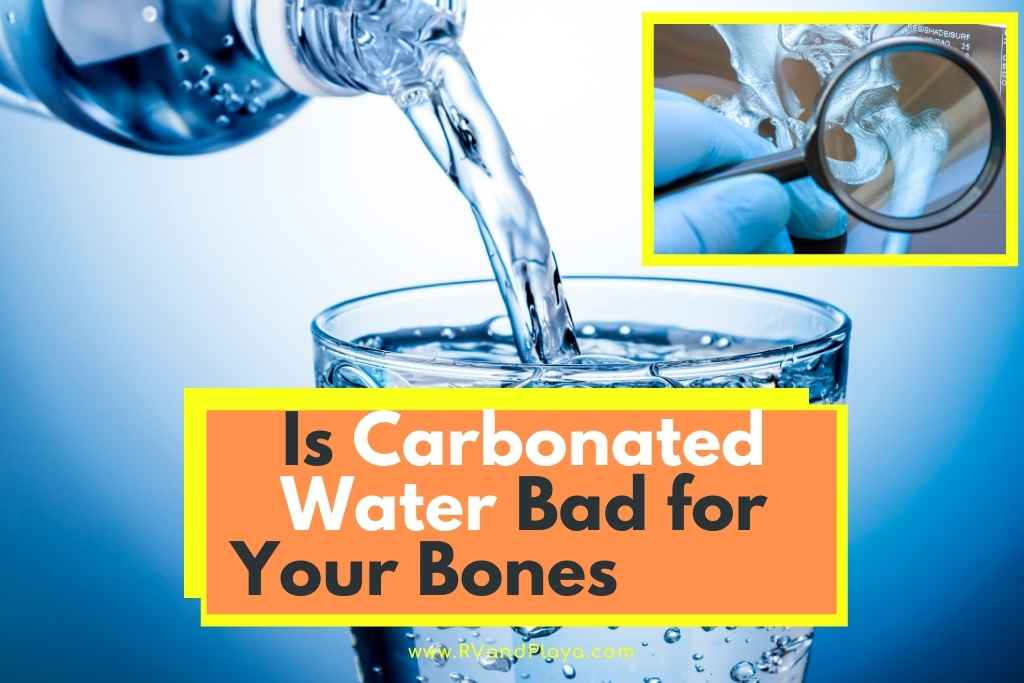 Do you know if carbonated or sparkling water is bad for your bones?  this is one of the questions our readers ask a lot. Well, we´ve got you covered.

Do carbonated drinks cause you to lose bone density? Is drinking your hard seltzers or sparkling water going to make your bones brittle?

We’re looking to see if there are any negative effects on your bones when you drink carbonated water.

We’ll explain where this idea comes from and give you tips about the benefits you can get from drinking bubbly water beverages. Keep reading to find out what we uncovered.

This question continues to come back up regarding carbonated drinks and bone mass density. The assertion is a flavor enhancer, called phosphoric acid, makes it difficult for the body to absorb calcium.

Your bones need calcium to stay strong. Calcium deficiency can lead to a loss of bone density. You could then be at greater risk of conditions like osteoporosis and brittle bones.

Where Does This Idea Come From?

Though phosphoric acid isn’t used in carbonated water, it is used in cola drinks with a dark color. People have been saying for quite a long time that drinking soda can reduce your bone density.

This may be true.

Phosphorus is thought to lessen your body’s ability to absorb calcium. When you don’t get enough calcium for an extended period of time, your bones can become less dense. It can lead to an array of health issues.

Phosphoric acid is used in dark colas, some pre-mixed teas, and some pre-mixed coffee drinks. It doesn’t mean you should never enjoy some of these beverages.

It just means, as with other foods we enjoy that aren’t the healthiest, you should drink them in moderation.

Ultimately, it seems the jury is still out on whether this theory is true or not. Researchers have performed several studies, but the results don’t always show the same thing.

One study published by the National Library of Medicine concluded the phosphorus intake does not affect calcium absorption.

The conclusion points toward a variance in individuals’ bodies’ efficiency level for calcium absorption.

According to Harvard Medical School, there isn’t evidence to support the theory about phosphorus causing a loss of bone density through reduced calcium absorption.

Given the lack of evidence, we must err on the side of no link between phosphoric acid and blocking calcium absorption.

You can easily account for one, though, by simply keeping your cola intake reasonable.

Is Carbonated Water Bad for You in Any Way?

People often say carbonated drinks cause tooth decay. If you’re drinking plain carbonated water without other additives, no it does not.

Carbonated water that has sugar, salt, or citric acid can cause tooth decay, though.

These additives cause the enamel on your teeth to wear away. That breakdown of the protective barrier leads to tooth decay.

Bloating like that can trigger IBS that already exists, but it won’t cause someone to develop this condition.

Does Carbonated Water Cause Weight Gain?

It won’t make you gain weight unless you’re drinking carbonated water that’s full of sugar, other sweeteners, and sodium.

How Do You Make Carbonated Water?

The carbonation process is simple. Carbon dioxide is pressurized and then added to plain water. Basically, the carbon dioxide dissolves into the water, turning it into carbonic acid.

Besides causing bloating, gas, and the tummy discomfort that comes with that, it’s harmless otherwise.

Isn’t Carbonic Acid Bad for You?

Some people feel that ingesting the carbonic acid that’s in carbonated water will cause acid levels in their bodies to go up.

The body handles the increase of acid with its filter system.

The lungs and kidneys are both filtering organ pairs. Carbon dioxide is removed from your body through these filters.

They work to restore your pH level to a normal 7.35 even when you take more of the gas in.

Is There Phosphoric Acid in Hard Seltzers?

Your hard seltzers don’t contain phosphoric acid. Some of them have a high sugar content and include other unhealthy additives, though.

They also contain varying amounts of alcohol. You should drink hard seltzers in moderation, as with any alcoholic beverage.

How Can You Get More Calcium?

If you’re worried about taking in more calcium, there are a few ways to do it.

Carbonated water does not cause bone density loss. It doesn’t contain any phosphoric acid, which may or may not decrease your body’s ability to absorb calcium.

Some other carbonated beverages may lead to less calcium absorption, but the theory has not been completely proven.

Plain carbonated water is safe and comes with no associated health risks.

link to 5 Most Common Disadvantages of Sparkling Water (Benefits!)

Have you ever asked yourself or your friend what are the disadvantages of Sparkling water? Well, you are at the perfect place to find the answer to such a question. We all try to choose the best...

Continue Reading
link to Does Sparkling Water Give You a Beer Belly? (The Truth!)

Do you know if sparkling water gives you a beer belly?  this is one of the questions our readers ask a lot. Well, we´ve got you covered. Even though sparkling water is fat-free and sugar-free,...