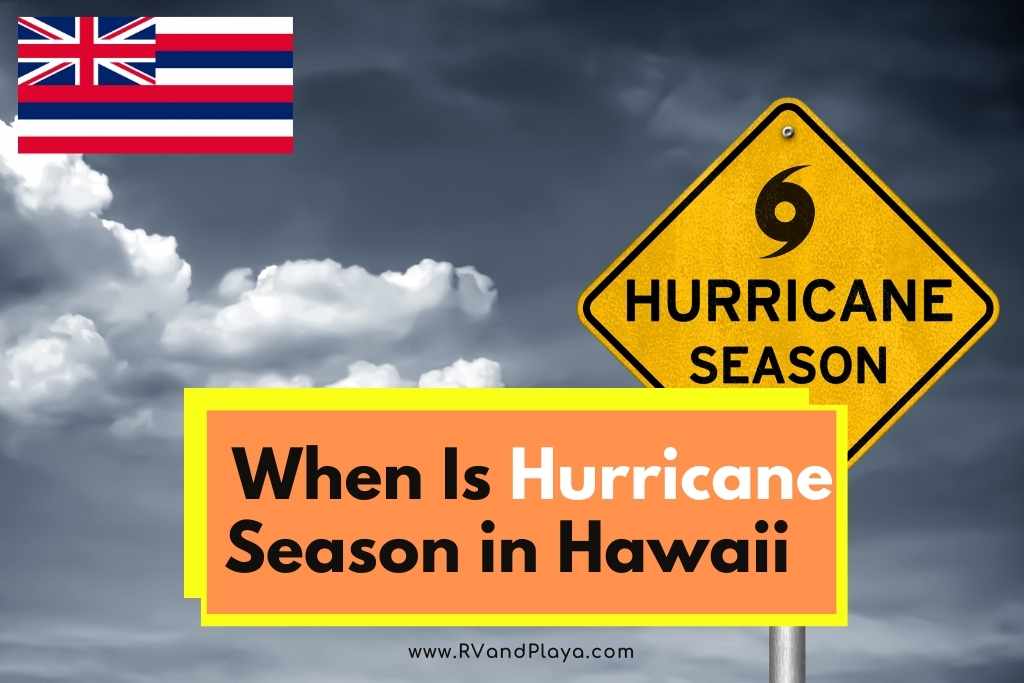 It may seem like residents of Hawaii would have to worry about hurricanes all the time, sitting out there in the middle of the Pacific Ocean. But does Hawaii have a hurricane season, and when is Hawaii hurricane season?

The hurricane season in Hawaii runs from June through November, though the largest risk for hurricanes occurs during the months of August, July, and September, in that order. Historically Hawaii has not been at great risk for strong hurricanes, though it does experience a lot of tropical storms.

Read on to find out when is cyclone season in Hawaii and everything else you need to know.

When Is Hurricane Season in Hawaii?

Just like the Caribbean, Hawaii can be hit by a hurricane any time during the period between June and November, though most hurricanes have passed close to Hawaii in the warmest months of July, August, and September.

August is the peak month for hurricanes in the Pacific, followed by July. September is the third most active, though it has half as many hurricanes as August.

Read also >> Where to Store Propane Tank During a Hurricane? (Secrets Nobody Is Talking About)

Read also >> How Much Wind Can A Travel Trailer Withstand? (Parked or Moving)

How Many Hurricanes Hit Hawaii?

Compared to the Caribbean, Hawaii has significantly fewer hurricanes.

In the last 60 years, around 39 hurricanes have passed close to the islands, causing significant wind and rainfall, though few of these have actually made landfall or caused significant damage. (Hawaii is a very small target and won’t be directly in the path of most hurricanes.)

Many hurricanes weaken to Category 1 or tropical storm status before making landfall, though these storms are still significant weather events (in other words, they might ruin your vacation).

Hawaii experiences around 4-5 tropical storms or depressions per year. (The Atlantic typically has 5-6.)

The most recent brush with a big storm came when hurricane Douglas passed 30 miles north of Oahu in July, 2020. It downed power lines and caused localized flooding, but never made landfall on the islands.

Two hurricanes passed by in 2018: Lane was a Category 5 that was downgraded before it passed near the islands, though it dumped a ton of rain and is among the strongest tropical cyclones in to have hit the U.S. Hector was a Category 4 that became a tropical storm, requiring dozens of people to be rescued from high surf in Oahu.

Will There be Hurricanes in Hawaii in 2022?

It is predicted that Hawaii will experience fewer tropical storms, depressions, or hurricanes in 2022 due to the effects of the La Nina weather pattern, which makes it more difficult for hurricanes to form.

Meteorologists predict the area will have 2-4 tropical storms or hurricanes.

Why Do Hurricanes Avoid Hawaii?

Hawaii isn’t technically protected from hurricanes, and a major storm could hit any part of Hawaii causing major storm surge and destruction.

A hurricane could in fact hit Honolulu, a town of around 400,000 residents.

However, hurricanes rarely hit Hawaii from the east because the water is too cold, so Hawaii is somewhat protected, though hurricanes approaching from other directions can become major storms.

To some extent, wind shear above the islands acts to prevent the development of powerful storms. In addition, a high pressure system in the northeast prevents hurricanes from reaching the islands, and is very strong during the high-risk months of hurricane season.

(This is also what makes the weather in Hawaii so great.)

The most dangerous hurricanes in Hawaii tend to approach from the south.

Hawaii is more likely to be hit by major hurricanes during El Nino years, when the surrounding water is warmer.

When Was The Last Time Hawaii Was Hit by a Hurricane?

Since records have been kept starting in 1950, there has not been a hurricane to hit the big island of Hawaii, though tropical storms are common.

Oahu has not been directly hit by a hurricane, though hurricanes have passed very close to the island.

Two hurricanes have made landfall in Hawaii in recent records: Hurricane Iniki in 1992, and Hurricane Dot in 1959.

Should I Visit Hawaii During Hurricane Season?

Many travelers choose to visit Hawaii during hurricane season, since it is typically one of the warmest and most beautiful times to visit the islands, and the risk of a hurricane is fairly low.

You may experience a localized tropical storm, though they typically pass quickly and cause minor disturbance, so many feel this is worth the risk.

If you really don’t feel safe rolling the dice on hurricanes or storms, or you don’t want to risk not being able to hit the beach, late spring and fall have good weather without the risk of storms.

How To Stay Safe During Hurricane Season in Hawaii

Destructive hurricanes are fairly rare, though tropical storms can lead to flooding and dangerous storm surge. Make sure you know how to stay safe during storm season in Hawaii.

Make sure your hotel has an evacuation plan and you know how they will get crucial information to the guests (this is also important for tsunamis–see below).

Stay out of the ocean during and after a storm. After large storms, runoff will make water murky and possibly dangerous.

Make sure someone back home knows where you are staying and your travel itinerary and dates. They should know how to contact your hotel or lodging.

If you need to go to an evacuation center, you will want to bring snacks and water with you. It isn’t a bad idea to be prepared.

Is A Cyclone a Hurricane?

When referring to storms in Hawaii, you may see that some are referred to as hurricanes and some as cyclones. They are one and the same.

Typically (though not always), forecasters refer to these types of spiral storms as hurricanes in the North Atlantic and parts of the North Pacific, Cyclones in the South Pacific and Indian Ocean, and typhoons in the Northwest region of the Pacific ocean.

Hurricane and cyclone are generally used interchangeably when referring to Hawaii.

What is Hawaii’s Tsunami Season?

While hurricane season only occurs during one part of the year, unfortunately tsunamis can strike at any time. Tsunamis are caused by seismic activity, which isn’t dependent on weather patterns.

It is estimated that Hawaii gets hit by a Tsunami on average every 12 years. Since 1812, there have been a recorded 160 Tsunamis.

Not all of these cause major destruction, though nine of these tsunamis have caused significant deaths and millions of dollars of damage.

When Was the Last Time a Tsunami Hit Hawaii?

In 2022, the volcanic eruption in Tonga caused a tsunami to hit Hawaii, causing over $3 million in damage.

The most destructive tsunami in Hawaii history was in 1946, when an Alaskan earthquake caused a 10-foot tsunami that killed 158 people in Hawaii and did over $300 million of damage.

When are the Worst Months to go to Hawaii?

Despite the possible (but unlikely) threat of hurricane season, many travelers say that mid to late December is actually the worst time to visit Hawaii.

December sees the most rainfall across the islands, and also sees a huge spike in tourism through the holiday season. This means more crowds, higher costs, and more difficulty getting bookings.

The largest crowds are reported to be in July, however, as summer is the busiest season.

If you must go in December, early in the month sees the smallest crowds.

What is the Best Month to Visit Hawaii?

It’s a running joke that Hawaii only has two seasons, though there’s a lot of truth in it.

The best time to visit depends a little on what you want to get out of your vacation. March through September have high temps and less rain (unless a tropical storm passes you by).

The water will also be warmest in the summer months. This is considered the high season in Hawaii along with late December.

In winter, Hawaii will still be warm, but will have more rain and stronger winds. If you want to see whales, early December and January will be your best bets.

Some travelers recommend sticking to April, May, September, and October. This way you avoid the hot summer months with their large crowds, but most likely won’t get as much rainfall and will be able to enjoy the beach.

October and November are the cheapest times to visit Hawaii. In addition, these months see lower crowds and pretty good weather–and you will avoid tropical storms. Hawaii does have a hurricane season, and it is possible for a strong hurricane to hit Hawaii and cause significant damage.

That said, historically major hurricanes have steered clear of the islands. While tropical storms may cause flooding and high winds, they don’t have anywhere near the record of destruction of hurricanes in the Caribbean and Atlantic.

link to When Is Hurricane Season in Mexico? (All You Need to Know)

Whether you’re planning on taking a vacation, moving to the area, or are already living in Mexico, you’ll want the answer to the question: when is hurricane season in Mexico? According to...

Continue Reading
link to Where to Store Propane Tank During a Hurricane? (Secrets Nobody Is Talking About)

People also ask, where to store propane tank during a hurricane? Hurricanes are just a fact of life in coastal communities but primarily for those who live really close to the water and in the...