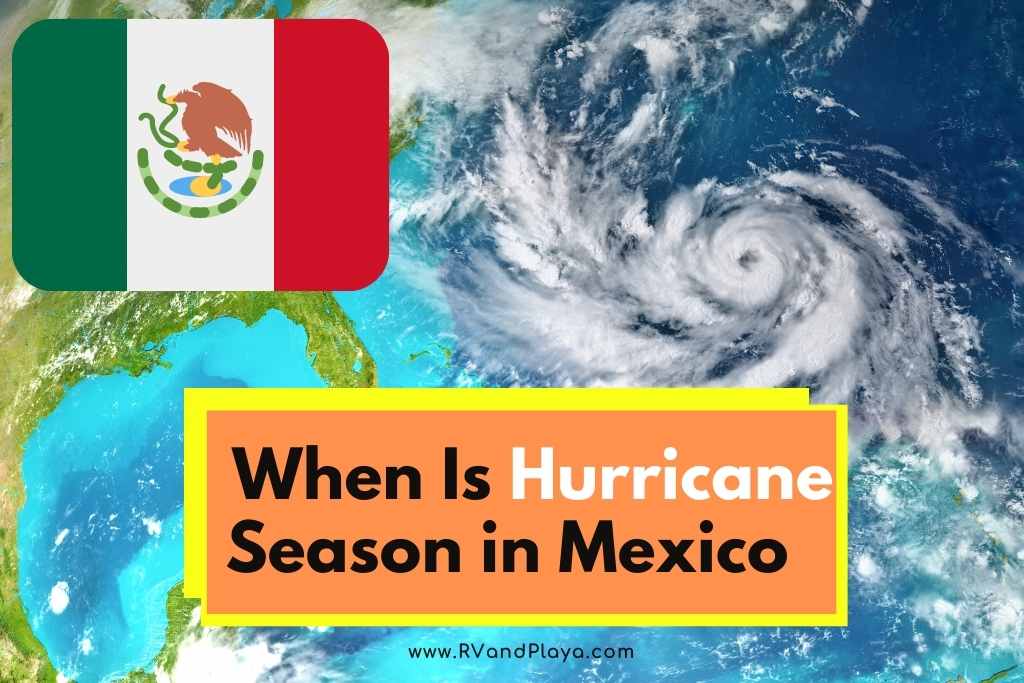 Whether you’re planning on taking a vacation, moving to the area, or are already living in Mexico, you’ll want the answer to the question: when is hurricane season in Mexico?

In this article, we’ll cover when hurricane season begins and ends in Mexico, what causes the hurricanes to form during that time, how often Mexico has experienced hurricanes, and a few more frequently asked questions relating to the topic!

When is Hurricane Season in Mexico?

Hurricane season refers to the months when hurricanes are most likely to form and remain active during the calendar year.

Hurricane season in Mexico differs depending on the hurricanes’ location, which can either come from the Pacific Ocean or the Atlantic Ocean.

The table below reflects commonly understood hurricane seasons in Mexico:

According to historical trends, the month of October and the month of September are the most likely to result in hurricanes in Mexico, especially on the Atlantic coast.

The History of Hurricanes in Mexico

Hurricanes and tropical cyclones have affected Mexico throughout history. When gauging the effect that hurricane season can have on this beautiful location, it can be helpful to understand the history of hurricanes in Mexico.

Mexico is made up of both a Gulf Coast and the Yucatan Peninsula, both of which see activity from Atlantic hurricanes. The biggest hurricane to effect these areas from the Atlantic is widely thought to be Hurricane Wilma.

Making landfall in 2005, during the most busy hurricane season in history, Wilma first affected Cozumel Island and then the Yucatan Peninsula. Wilma’s winds were at a force of 150 miles per hour, according to Hurricane Science.org, and the storm brought 62 inches of rainfall!

This hurricane brought $4.6 billion in agricultural losses and $7.4 billion in total damages to Mexico. After two days of churning through the Peninsula, it turned back out into the Gulf and strengthened into a Category 3 hurricane, going on to cause even more damage in Florida.

The amount of damage Hurricane Wilma did to Mexico in October of 2005 has served as a cautionary tale to those spending time in the country during hurricane season.

Other Atlantic hurricanes and tropical storms of note that have struck Mexico include:

The portions of Mexico that have been historically affected by Pacific hurricane season are the southwest coast, including Acapulco and Puerto Vallarta.

When hurricanes impact these places negatively, the effect is exacerbated by the fact that it is the home of most of Mexico’s beach resorts and main tourism revenue.

Making landfall on October 27th in 1959, it is blamed for over 1,000 deaths and had winds up to 162 miles per hour. It destroyed many homes in the Jalisco state and caused a Colima landslide.

No other hurricane, including the more frequent Atlantic variants, has caused as much death.

Other noteworthy Mexico hurricanes from the Pacific are not as frequent, but include: Below are some of the most frequently asked questions relating to hurricanes, their frequency, in Cancun and Mexico!

When is the best time to go to Mexico?

The best time to go to Mexico, according to climate trends, is early winter through late spring: specifically, after December and before the month of April is over.

During this time, the chances of rain decrease significantly, and the temperatures rarely get warmer than 82 degrees Fahrenheit.

What part of Mexico does not get hurricanes?

Although all of Mexico is susceptible to landfall by hurricanes, it is generally agreed that the valley of Puerto Vallarta is one of the safest places to go in Mexico in the event of strong winds and bad weather.

This is because the mountains create a natural barrier against the effects of both storm surges and harsh winds.

What month is hurricane season in Cancun, Mexico?

Hurricane season in Cancun begins in June and lasts through November. This means that it starts earlier than the average months of likely hurricane landfalls in the rest of Mexico, and ends around the same time.

What are the worst months to go to Cancun?

The worst months to go to Cancun, Mexico in terms of weather is during Cancun’s hurricane season: June, July, August, September, October, and November.

In terms of crowds, the middle of march and the very beginning of April caused Cancun to become stuffed with students on Spring Break!

What part of Mexico gets the most hurricanes?

The part of Mexico that suffers from the most hurricanes is the northwest and southern portion of the Baja California peninsula, as well as the Michoacan state and the Yucatan.

On average, more intense hurricanes of note hit the coast of the Gulf or Caribbean.

What months are the worst for hurricanes?

On average, no matter where you go in the world, including Mexico, the worst month for hurricanes is the month of September.

Again, when averaging between the two seas, September is universally recognized as the worst month in terms of likelihood of hurricane landfalls.

Is Mexico safe during hurricane season?

According to meteorologist Dennis Feltgen, every part of Mexico’s coast is vulnerable to hurricane landfalls, but some places, like the sheltered cove of Puerto Vallarta, are safer than others in the event that one does come near to land.

Mexico does have plenty of places to take shelter from hurricanes, such as the capital, and moving inland when a hurricane nears any of Mexico’s coasts is a widely recognized way to stay safe during the dangerous seasons.

What is hurricane season in Puerto Vallarta?

Like much of the coast of Mexico, Puerto Vallarta’s hurricane season begins in June, peaks in September, and ends around October.

Pacific hurricanes are rare in Mexico, and their negative effects are the least prominent in sheltered areas like Puerto Vallarta.

Atlantic hurricanes are more common and have caused the most damage.

Though Mexico has suffered fearsome hurricanes in the past, it’s hurricane season trends are well documented so that you can travel prepared!

link to Where to Store Propane Tank During a Hurricane? (Secrets Nobody Is Talking About)

People also ask, where to store propane tank during a hurricane? Hurricanes are just a fact of life in coastal communities but primarily for those who live really close to the water and in the...

Continue Reading
link to How Much Wind Can A Travel Trailer Withstand? (Parked or Moving)

Have you ever wondered how much wind a travel trailer parked or moving can withstand? Look no more. We´ve got you covered. A travel trailer is a specific type of recreational vehicle that hooks...