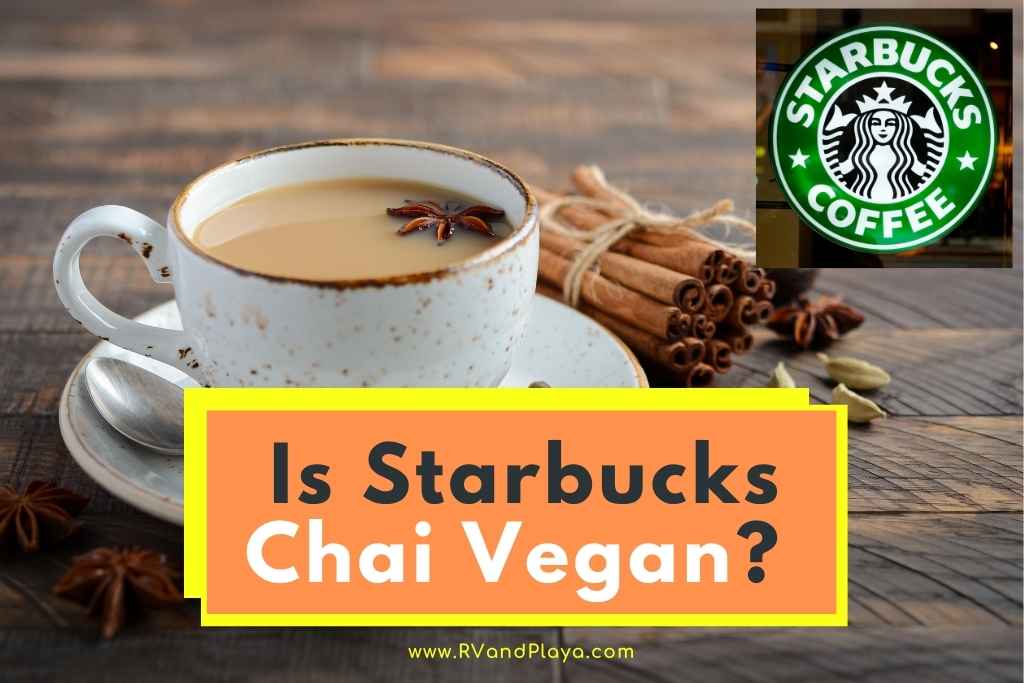 As more and more people are turning to the vegan lifestyle, it isn’t a surprise that people are starting to wonder whether their favorites at Starbucks are available in vegan options, particularly the Chai drinks.

Starbucks Chai Latte is not vegan. This is because it contains honey. This is the only animal product in the base. Sadly, there are no vegan options available for Starbucks Chai Latte, so if you are a vegan, you will have to avoid it.  The Chai tea bags are vegan, though.

Let’s go into a bit more depth on this, shall we?

None of the Starbucks Chai products are vegan. This applies whether you have milk in your Chai Tea or not.

This is because Chai Tea contains honey.

Now, of course, there are some vegans out there that class honey as a vegan product, despite it coming from animals. However, if you consider vegan in the strictest sense of the word then, no, Starbucks Chai is not vegan.

It is unknown how much honey is inside a Starbucks Chai base. However, since it is listed as one of the main ingredients in the product, we can assume that it is a rather sizeable amount.

What is in Starbucks Chai?

Starbucks chai tea concentrate is used in most of their chai recipes, including the chai latte.

On the Starbucks website, the ingredients in the chai tea concentrate are:

Does Starbucks Have Vegan Chai?

Since the Starbucks chai concentrate has honey, many people may want a vegan alternative. There is a way to work around the honey while staying within the Starbucks menu.

Starbucks offers Teavana teas. Teavana has a chai tea that you can order steeped. This chai tea has no honey added, so it is vegan.

If you want a vegan chai latte, you can order the Teavana chai tea with your choice of non-dairy steamed milk. (Starbucks generally offers coconut milk, almond milk, soy milk, and oat milk for those looking to avoid dairy).

Can You Get Vegan Lattes at Starbucks?

You can get several options of vegan lattes at Starbucks. Luckily, with their many milk options, you can get many of the basic Starbucks recipes with non-dairy milk.

As long as the syrup for the latte contains no honey, it is easy to turn the recipes vegan.

The easy vegan latte options at Starbucks are:

Can Starbucks Hot Chocolate be Vegan?

Starbucks hot chocolate is not traditionally vegan, as it is made with hot milk. However, you can just ask them to make the hot chocolate with your favorite non-dairy milk.

“But wait,” you say, “doesn’t chocolate have milk?” You are correct. Chocolate has milk. However, Starbucks does not use chocolate to make their hot chocolate. Instead, they use their mocha syrup. The mocha syrup only uses sugar, water, and cocoa, so it is vegan.

That means you can safely order the non-dairy version of your Starbucks hot chocolate to make it vegan.

Often, the hot chocolate at Starbucks is served with a mound of whipped cream. Make sure to tell your barista to leave off the whipped cream if you want to keep your cocoa vegan.

This means that if you are a vegetarian, you will be able to take the normal Chai Latte from Starbucks. You will not have to go through the rigmarole of using Chai teabags or anything like that.

It would appear that the Starbucks Chai tea bags are vegan. It seems as if only the latte and frappucino Chai options contain honey.

This means that if you have a tea bag in hot water or almond milk, then there is a good chance that they could be vegan.

That being said, since honey is going to be a core ingredient in the chai taste, we cannot 100% guarantee that they will be vegan. Some people believe that they are vegan, while others are in the boat that they are not.

Sadly, Starbucks does not list the ingredients for the Chai tea bags on their website. This means that it is impossible to know whether they have honey in them or not. They likely do.

Can You Get a Vegan Starbucks Chai Latte?

You cannot get a Vegan Starbucks Chai Latte.

Because the base product always contains honey (as it is part of the flavoring of Chai), it is impossible to get a vegan version.

It is unlikely that Starbucks will introduce a vegan version in the future either. Yes, they are doing it to a lot of their products.

However, because a good chunk of the taste of a Vegan Chai is going to be in the honey, they probably do not have the ability to switch things around.

How To Order a Vegan Chai Latte at Starbucks

Not all Starbucks stores will have them. It is very much going to be dependent on where you live and the size of the store. The closest that you will get to a Vegan Chai Latte is if you mix up the following:

Do bear in mind that you have to make it clear that you want this mixture. By default, many Starbucks employees will give you a Chai Latte. As you know by now, that contains honey and thus it is not vegan.

Do bear in mind that the taste of this is going to be ever so slightly different to the traditional Chai Latte sold by Starbucks. This is because there isn’t going to be any sugar or honey in it. The spices are roughly the same, though.

If you want to get the taste of this as close as you possibly can to that of the normal Chai Latte, then you are going to need to add a good chunk of sugar into the mix.

Don’t go overboard, though. The steamed almond milk will give you a bit of that flavor. It is very much going to be ‘taste it and see’ here.

Remember, you are going to need to leave that teabag in the steamed milk for a good 5-10 minutes. If you do not leave it in that long, you are basically just going to have warm almond milk.

You really want to get the flavor out of everything, right? If you leave the teabag in for longer than 10-minutes, then you run the risk of the taste being a little bit too bitter.

You can rectify this by adding a bit more sugar but, at this point, most people just assume that the drink is ruined.

It is worth noting that the Starbucks Chai tea bags are likely to be vegan.

Many vegans have reported that they do not contain honey, or at least the honey is not listed in the ingredient list. However, this is something that you will likely need to check yourself.

As honey is a key part of the Chai flavor, there is no guarantee that they are truly honey-free, even if they do not specifically list it.

Do you know if Branston baked beans vegan are? Well, you are at the perfect place to find the answer to such a question. When it comes to making sure that the products you are eating are vegan it...

Do you know if Quest protein bars are vegan? this is one of the questions our readers ask a lot. Well, we´ve got you covered. While strength training and bulking up on protein, you may want to...