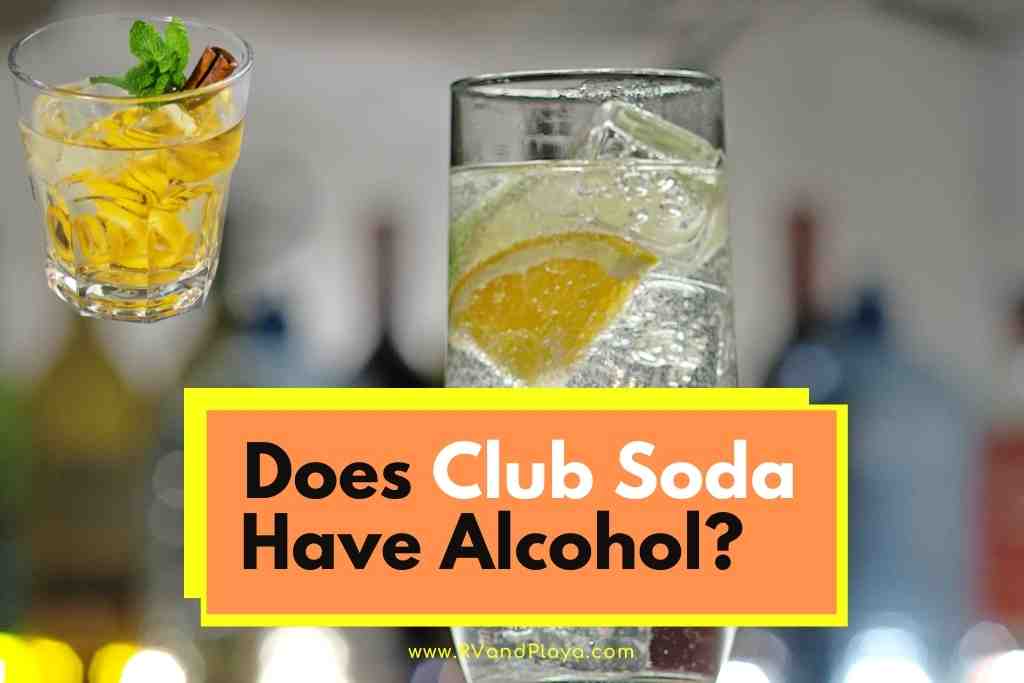 Do you know if Club Soda has alcohol? this is one of the questions our readers ask a lot. Well, we´ve got you covered.

Club soda has been a staple at bars for a long time. This classic carbonated beverage is commonly used in combination with other drinks or alcohols to create new concoctions.

And although most people are aware of club soda’s makeup, some still want to know whether Club Soda contains alcohol or not? The answer is, no, club soda does not have alcohol in it. Club soda is merely a type of carbonated water with minerals added to it. However, club soda is often used as a mixer for different alcoholic cocktail drinks.

In this article, we will discuss exactly what club sodas contain (which makes them non-alcoholic), including their mineral content.

Stick around to the end, where we’ll share our best tips for sprucing up your club soda for a non-alcoholic night of drinking.

What Is Club Soda Made Of?

Although it can be easy to assume that club soda is an alcoholic beverage, since it’s used in tandem with so many bars and alcoholic spheres, it’s not.

Club soda is a pretty simple beverage that is nothing more than carbonated water with some supplemented minerals mixed in.

A lot of people assume that club soda is the same thing as seltzer or various sparkling waters, and they are each form of carbonated water.

However, the key difference is in the minerals.

These minerals are for adding a bit of flavor to the water in club soda, and they include sodium bicarbonate, potassium sulfate, disodium phosphate, and sodium chloride.

You’ll notice that the last one in that list is actually the chemical compound for table salt.

This is why, depending on what type of club soda you’re drinking, you may notice a slightly salty taste to it.

Click the link to Amazon and get The Best Club Soda Today!

Club soda isn’t unhealthy, but it’s also not specifically marketed for health purposes since it doesn’t have many nutrients in it.

Aside from helping you to make the more hydrating choice at the bar, club soda has no calories, no sugar, no carbohydrates, no fat, and no protein.

Although club soda doesn’t have much inherent nutritional value, there are still some advantages to drinking it instead of alcohol.

Namely, it helps you to stay hydrated while still keeping a drink in your hand at a bar or during a night of friends drinking together.

Furthermore, club soda is a very cost-efficient way to drink with friends, whereas mixed drinks, beer, wine, or shots of liquor could end up costing you $20 or $30 after a night out.

Club soda is pretty inexpensive since it’s basically just carbonated water, and because of this, you’re likely to pay very little for it (if anything) at a bar.

Another perk of drinking club soda as opposed to alcoholic beverages is that it is way healthier. While beer is heavy on the gut and can be high in calories, club soda has no calories or carbs.

Mixed drinks and various cocktails are notorious for having lots of sugar and calories based on the mixers.

With club soda, though, you can take a detour from those calories and end up with a hydrated body and mind at the end of the night.

Since club soda is quite plain as it is, it’s good to be aware of a few ways to make the drink more interesting.

While the obvious choice is to use club soda for mocktails (non-alcoholic cocktails), you can also add light flavors and mixers into your club soda for a less sugary or heavy drink.

One way to make club soda more exciting is to go for the cocktail – but exclude the actual alcohol.

It’s much healthier and won’t leave you feeling groggy the next day.

Several delicious mocktails using club soda as a base include:

As a general rule of thumb, a spritz of citrus juice in a glass of cold club soda is always a go-to choice. Lime juice is the standard, although lemon will do as well.

You can also throw in an orange peel, a few frozen cranberries or raspberries, or some other light flavor.

Club soda does not have alcohol, although it’s often used in alcoholic mixed drinks as a base.

Club soda is a type of carbonated water with minerals mixed in, such as sodium chloride and potassium sulfate.

There are plenty of ways to spruce up a glass of club soda to have a healthier and cheaper alternative to alcoholic mixed drinks.

link to Does Club Soda Hydrate You (Best Tips!)

Do you know if Club Soda can hydrate you? this is one of the questions our readers ask a lot. Well, we´ve got you covered. Staying hydrated is one of the most important things we can do for our...

Kirkland Signature water might be dedicated to sustainability but how does their water compare to other top brands? Is it safe to drink? Does it have minerals or fluoride? Where does it even come...