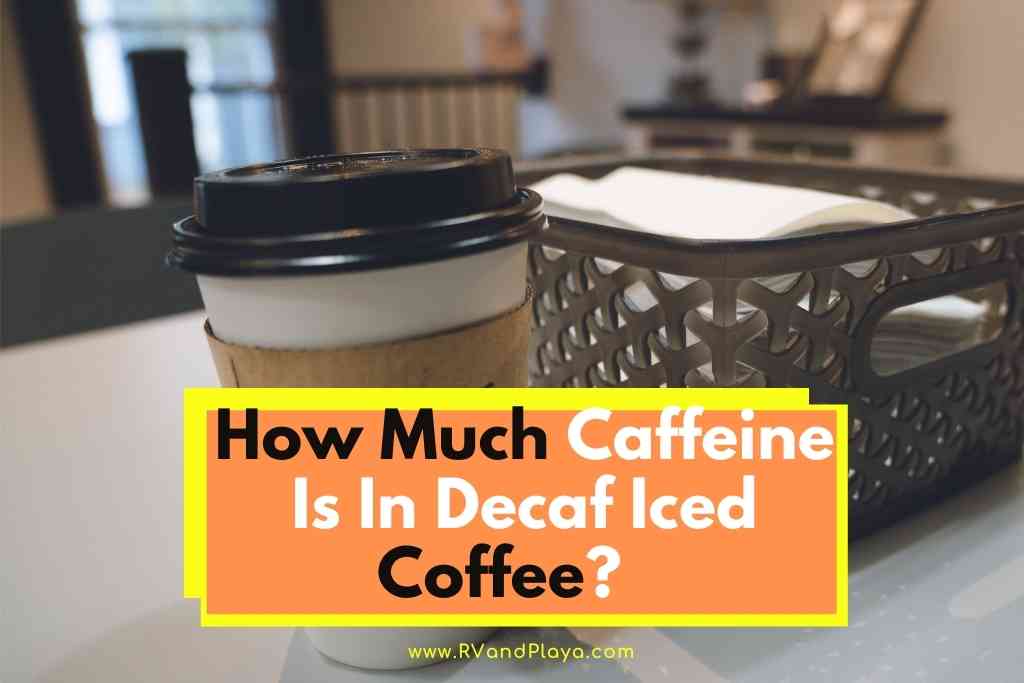 Have you ever asked yourself how much Caffeine is in Decaf iced coffee? this is one of the questions our readers ask a lot. Well, we´ve got you covered.

Coffee beans naturally contain caffeine. In order to remove the caffeine, it must be extracted from the bean before the roasting process, while the beans are still “green”. There are three ways this is done:

This is the most common method to remove caffeine from coffee beans. With this method, coffee beans are repeatedly steamed and rinsed with a chemical solution to wash away the caffeine.

Then the solvents are rinsed away from the beans. The roasting process further evaporates the chemicals, leaving only trace amounts that are safe for consumption.

Read Also: How Much Caffeine Is in Decaf Black Tea? (The Truth!)

This method is commonly used to decaffeinate organic coffee beans, as it does not use chemicals. It uses osmosis and carbon filtration processes to create a “green coffee extract” that contains the flavorful, caffeinated components from an initial stock of beans.

Those beans are discarded and the extract is then filtered to remove the caffeine molecules. The remaining liquid is used to wash and filter subsequent batches of beans.

This method uses carbon dioxide under high pressure and temperature. First, the beans are soaked in water. Then the carbon dioxide is injected into the bean and rinses away the caffeine. The caffeinated carbon dioxide then evaporates, leaving the flavorful components intact.

Decaffeinated coffee is actually regulated by governments. In the U.S.A., caffeine in food is regulated by the Food and Drug Administration (FDA). In order for coffee to be considered decaffeinated in the U.S., it must have 97% of its caffeine removed.

How is decaf iced coffee made?

Iced coffee is made by brewing double-strength coffee using water that is just below boiling point. The brewed coffee is then cooled, poured over ice, and mixed with sweetener and a splash of milk.

How much caffeine is in decaf iced coffee drinks?

You may notice those numbers span a wide range – there is a big difference between 2mg of caffeine and 15mg of caffeine in a decaf beverage, especially if you drink more than one cup a day!

Even though decaf iced coffee is made with decaffeinated beans that have 97% of their natural caffeine removed, the final amount of caffeine in the drink will vary depending on what type of bean was used, where you get your drink, what size you order, and how diluted your drink is.

What type of bean:

Coffee beans come from coffee-growing regions all over the world. Some are grown and decaffeinated organically, some are not. There is a wide variety of roasting processes as well (for example; light, medium, and dark roast).

Therefore, decaffeinated coffee beans will naturally have varying amounts of caffeine and other substances in them, even ones grown in the same region.

Where you get your coffee:

There have been several studies comparing the amounts of caffeine found in coffee drinks across different coffee shop chains.

What size do you order:

If you read the FDA’s description of the amount of caffeine in decaf coffee carefully, you will notice it says “per 8oz serving.” Now, most people do not measure their servings of coffee, and in fact, most coffee chains serve beverages larger than 8oz.

For example, while a Starbuck Short is 8oz, a Starbucks Tall is actually 12oz, a Grande is 16oz, and a Venti for cold drinks is 24oz. In contrast, a Small at Dunkin Donuts is 10oz, a Medium is 14oz, and a Large is 20oz.

This is important because you are probably consuming more caffeine by volume than you think when drinking decaf coffee. A Starbucks Tall (12oz) cup of decaf will have approximately 15mg of caffeine.

How diluted your drink is:

Iced coffee drinks may have strong, double-brewed coffee in it to start, but that strong coffee gets diluted when it’s poured over ice.

Some shops also add milk, cream, water, or whipped cream to their iced coffee drinks, which dilutes it even further. This decreases the amount of caffeine in decaf iced coffee.

Is there more caffeine in decaf iced coffee versus decaf hot coffee?

As mentioned earlier, iced coffee drinks are made by brewing strong coffee first, then pouring cooled coffee over ice. However, that does not mean decaf iced coffee has more caffeine than decaf hot coffee.

Brewing coffee double-strength will create a greater concentration of caffeine in a hot beverage. However, in the case of iced coffee, that concentrate is then diluted by pouring over ice.

There is less coffee per volume in a cup of iced coffee because the space is taken up by ice. The melted ice also dilutes the caffeine content in the drink.

Therefore, any increase in caffeine compared to a cup of hot decaf coffee is negated when the hot coffee is poured over ice.

If you are a coffee lover, you probably track where you can get the best beans and grinds in town. It may surprise you, though, to find out that you could just buy your coffee at Costco. Kirkland...