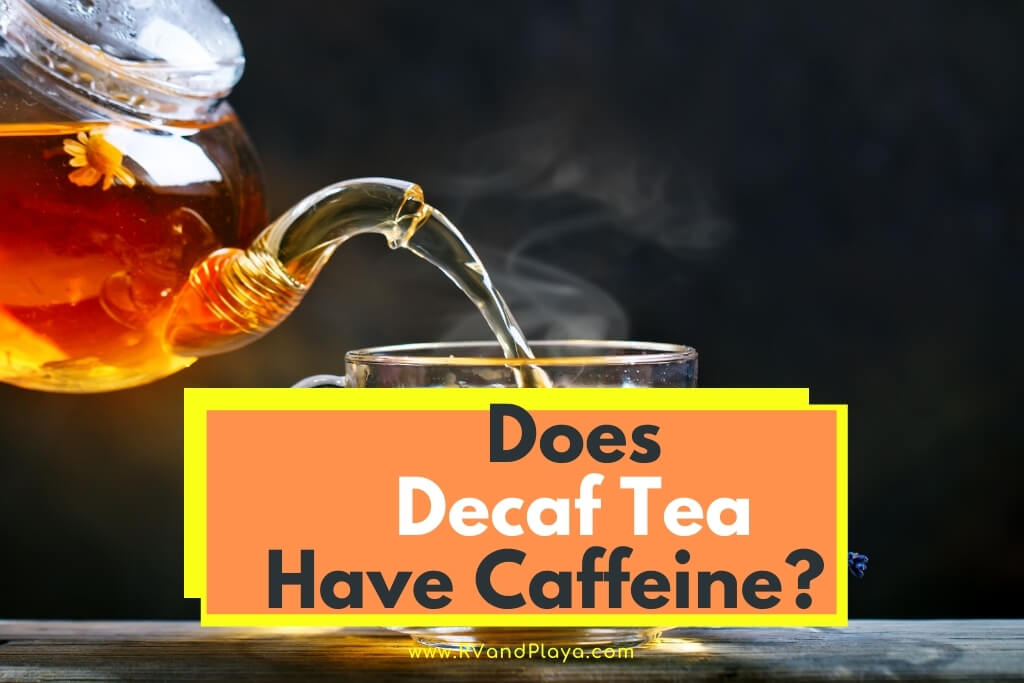 Do you know if decaf tea has caffeine?  this is one of the questions our readers ask a lot. Well, we´ve got you covered.

Let’s look a little further into the difference between decaffeinated and caffeine-free. We’ll also see how the tea leaves get decaffeinated.

Keep reading for all the things you should know about your favorite decaf teas.

Why Is It Called Decaf if It Has Caffeine in It?

There’s a difference in meaning between the terms “decaffeinated” and “caffeine-free.” Caffeine-free means there was never any caffeine present.

Decaffeinated means there was until the substance, tea leaves in this case was put through a decaffeination process.

When tea leaves are decaffeinated, the caffeine is extracted from them. Legally, tea leaves must have less than 2.6% of the caffeine they started with before they can be labeled as decaf.

Multiple processes exist for the decaffeination of tea leaves. Four of them are quite common. A process involving ethyl acetate is the most popular in the United States.

In this section, we’re exploring the different methods to see how tea leaves get decaffeinated.

Ethyl acetate is used as a solvent to remove caffeine from tea leaves. Basically, you soak the tea leaves in the solvent solution.

The caffeine forms molecular bonds with the ethyl acetate allowing the solvent to pull it from the leaves.

Ethyl acetate is a naturally occurring substance within living organisms. Tea products that indicate they’ve been naturally decaffeinated somewhere on the packaging have gone through this process.

One thing to be aware of regarding tea that’s gone through ethyl acetate decaffeination is it’s tough to remove the solvent from the leaves. Some consumers report a chemical taste with this type of decaf tea.

Read also: How Much Caffeine Is in Decaf Espresso?

This is considered a direct method.

Manufacturers also use methylene chloride to remove the caffeine indirectly. They start by brewing the tea to separate the caffeine from the tea leaves.

Next, methylene chloride is mixed into the brewed tea, where it again allows the caffeine to bond to the solvent molecules.

The decaffeinated brewed tea is then reunited with the leaves it came from without the caffeine.

This method starts with the moistening of the tea leaves. Pressure is applied to them next. The leaves are then blasted with heated CO2 that grabs the caffeine and pulls it out on the other side.

The CO2 used to remove the caffeine gets filtered and recycled back through to continue to remove caffeine from the leaves.

When enough has been extracted, the leaves are left to dry.

Water processing or the “Swiss Water Method,” as it is sometimes referred to as, isn’t used much for tea. It’s a method more widely used to decaffeinate coffee. However, some tea makers use it to decaffeinate tea leaves.

The process is simple. The tea leaves are soaked in hot water. The tea gets pushed into a carbon filter, so the caffeine is separated.

The liquid that’s left is allowed to reabsorb into the leaves it originated from.

Which Process Is Best?

We’ll start by saying the methylene chloride method is controversial. Methylene chloride is thought to be dangerous for humans to consume. In the U.S., producers are limited to leaving only traces as small as five parts per million of this chemical solvent in decaf tea.

The U.S. also refuses imports of tea or coffee decaffeinated with methylene chloride.

The water method is safe and natural. It doesn’t remove as much caffeine, though. It also is said to dilute the flavor of the tea.

Ethyl acetate decaffeination is performed using a naturally occurring substance. The problem with this method is it’s difficult to rinse away the ethyl acetate after the process.

It leaves behind a taste that some people detect.

Supercritical CO2 decaffeination is the best process. It’s safe to use, doesn’t change the taste of the tea, and doesn’t require the tea to be brewed.

The leaves are left in their original state, other than the addition of a little moisture.

Decaf tea has caffeine but not very much. An average cup of decaf tea has no more than 2 milligrams of caffeine in it.

The amount of caffeine varies from one cup to the next because the same is true of different tea leaves.

Decaf tea has undergone one of the four decaffeination processes but is not caffeine-free.

Three methods are commonly used to decaffeinate coffee. One is by water processing. Another is through the use of chemical solvents. And a final method requires carbon dioxide. While the carbon...

Continue Reading
link to How Much Caffeine Is in Decaf Espresso? (Starbucks, Lavazza, Nespresso, Caffeine-Free)