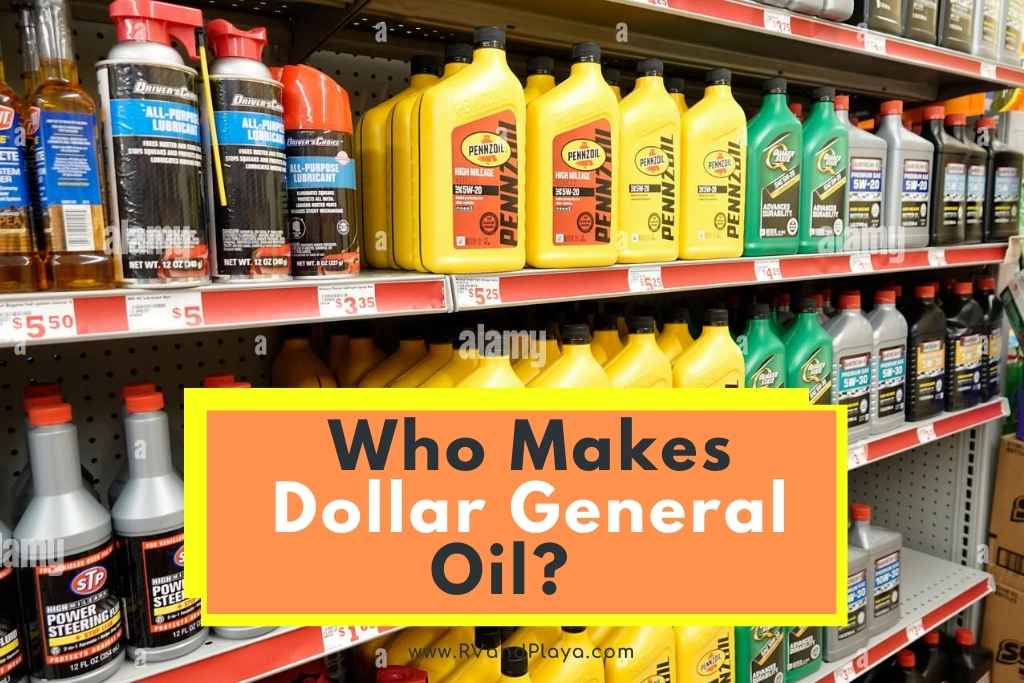 Dollar General is well known for its motor oil. But, who makes it? Is it worth buying? All these questions will be answered on this page.

Dollar General oil is manufactured by Dolgencorp. This is the parent company of Dollar General. Sadly, the oil bottles do not get much more specific than Dolgencorp. It is likely that there are several manufacturers that are producing oil for the company.

Let’s answer some of the most common questions that people often have about Dollar General oil. This includes whether it is going to be worth buying or whether you should avoid it.

Now, we do want to point out that this does not necessarily mean that Dolgencorp is physically manufacturing the oil themselves. In fact, the chances of this being the case are pretty low.

It is much more likely that Dolgencorp is outsourcing the motor oil production to a variety of different companies, and thus each of their motor oils may be made by different places.

Sadly, the packaging for Dollar General Oil does not list the actual manufacturer at all. Although, we are fairly confident that the oils are made to Dolgencorp standards. This means that no matter where the oil ends up being manufactured, it will always be the same.

You would never be able to tell that one oil is made in one location and the other oil is made somewhere else, which is nice.

Read also >> How Often Should I Change Synthetic Oil For My Toyota? (Change Intervals)

The one thing that we do wish to point out, however, is that Dollar General oil has been the subject of lawsuits. For a while, Dollar General sold oil that wasn’t suitable for all vehicles, despite the oil implying that it did.

If people read the small print, they would have discovered that the oil was only for vehicles built before a certain year. As you can probably imagine, a lot of people ended up purchasing the wrong oil, and it messed up their vehicles.

Thankfully, after that lawsuit, the oil at Dollar General changed its label. However, we do still encourage you to read all of the information on the Dollar General oil to be 100% sure that you are purchasing the right oil for your vehicle.

Sadly, due to the way in which Dollar General works, there won’t be anybody in that store that will easily be able to help you out.

Read also >> How Long Does An Oil Change Take At A Dealership? (Best Tips!)

Is It Worth Buying Dollar General Oil?

As long as you actually read the label on Dollar General oil, we don’t think that you will have any issues buying it. For the price that you are paying, you are going to be ending up with something that is fairly reasonably priced, and this is great.

Of course, if you can stretch to buying a higher quality oil, then we do suggest that you do that too. As brilliant as Dollar General oil is, the oils that come from some of the bigger manufacturers tend to be formulated much better, and they normally have a few additives that can help keep your engine in perfect condition. Dollar General oil is pretty much going to be the most basic of engine oils.

Still, Dollar General oil can be a good purchase. This is actually one of only a few companies that sell oil for obsolete vehicles (see: the lawsuit), which can come in handy.

There doesn’t seem to be too many people that are complaining that the oil (assuming that they have purchased the correct one) is messing up their vehicle either. So, all in all, you are going to end up with something worth buying.

As near as we can tell, absolutely every single product in their range is outsourced to a variety of manufacturing facilities, and it just has the Dolgencorp and Dollar General logos added to the packaging.

Instead, the manufacture of the oil will be outsourced to a variety of motor oil companies. Sadly, the packaging doesn’t give the specifics on where the product was actually manufactured.

If you are looking for a good motor oil at an affordable price, then we recommend that you pick up Dollar General oil.

However, do ensure that you read the product label so you know that you are getting the right oil for your vehicle.

link to Who Makes NAPA Oil Filters (The Truth!)

If you’ve noticed something different about the packaging of your NAPA oil filter, you’d be right. NAPA, one of the most trusted auto parts stores, is a staple for getting good quality...

Have you ever wondered who makes Walmart Oil? Look no more. We´ve got you covered. Often Walmart covers up the identity of some of their signature labels under the protection of trade secrets....