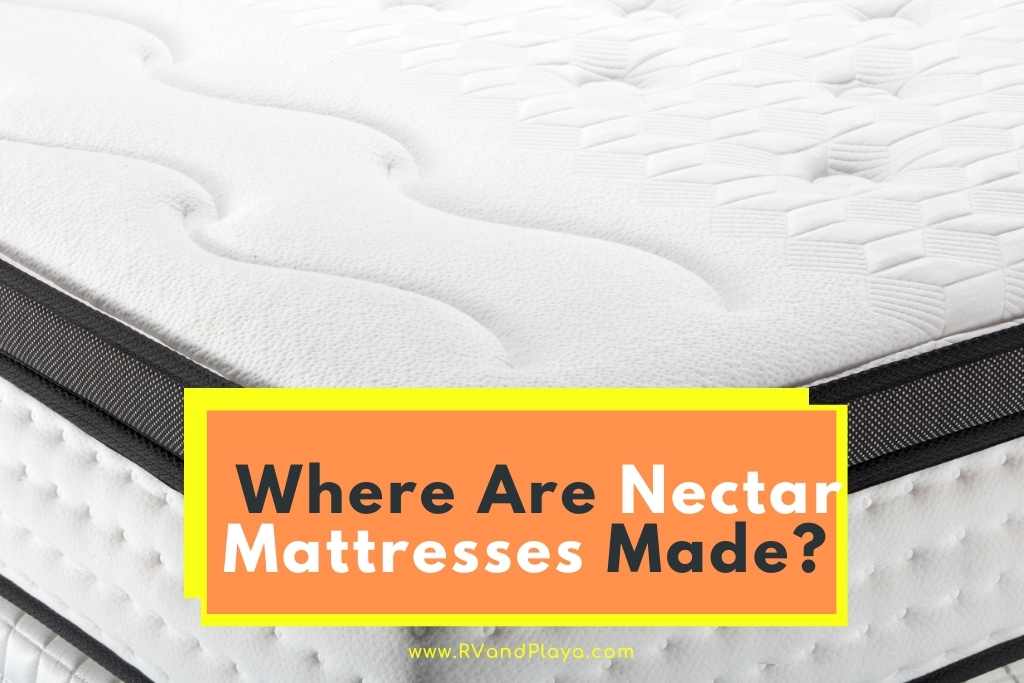 Once the mattresses have been manufactured in the United Kingdom and China, they are imported to the United States. As of 2022, Nectar does not have any assembly or production facility in the US.

Primarily, the mattresses are made in China, with only mattresses sold in Britain being made in the UK.

Within this article, we will discuss in more detail where mattresses by Nectar Sleep are made and assembled, and any relevant information regarding the origins of Nectar Sleep products.

Nectar Sleep is a mattress manufacturing company based in America which sells its beddings and mattresses online in 49 US states.

Unlike other mattress companies where you purchase the mattresses in-store, they deliver it to the customer’s front door in a box.

In 2016, Nectar Sleep began its production as a mattress company, and since then, it has led the market. They were established in Palo Alto in California, and as such, they are an American company.

In 2022, a businessman called Aayush Phumbhra became the CEO of Nectar.

Read also >> Does Nectar Mattress Get Softer? (All You Need To Know)

Are Nectar Mattresses Assembled in the States?

Even the gel memory foam in Nectar mattresses is both manufactured and assembled in China.

The polystyrene material that is used in the mattresses is high-quality as they are sensitive to both pressure and temperature. This means that they can mold your body shape and become even more comfortable over the years.

The following layers make up a single mattress from Nectar Sleep, all of the materials being manufactured in primarily China and secondarily in the United Kingdom:

All of the above layers are manufactured and then assembled in China. The exception to this is Nectar Sleep mattresses which are sold in the UK after being manufactured in Britain.

Nectar Mattresses Lawsuit for Assembled in the USA

In 2018 Nectar Sleep faced a lawsuit for false claims.

Nectar Sleep claimed that their mattresses were both designed and assembled in the United States, whereas in reality they were largely manufactured in China.

The company wanted the positive attention that comes with products that have been assembled in the USA, but in reality, only their designs originated in the States.

A lot of buyers appreciated the idea that the mattresses were made in the USA due to the fact that it would support the national economy and support Americans nationwide.

The tagline, Assembled in the USA is great for increasing sales, but in this situation, it only backfired. Due to the fact that this information was incorrect, they had to face a lawsuit.

The order from the lawsuit now prohibits Nectar and its company representatives from doing several things.

Namely, making misleading and unsubstained country-of-origin claims in their marketing materials. Each violation of the order will result in a civil penalty of up to $40,654.

Other Products Sold by Nectar Sleep

Nectar Sleep may be well-known for its mattresses, but that isn’t all they sell. They also offer the following products:

Not just that, but Nectar Sleep also sells a bed frame with a headboard and a luxury bed sheet, both of which can be adjusted to suit a customer’s needs.

Every one of Nectar Sleep’s products mentioned above are primarily manufactured in China, not the USA.

What Are Nectar Mattresses Made Of?

All of the materials in mattresses by Nectar Sleep are made primarily in China and then secondary in the United Kingdom.

One of the main reasons why mattresses by Nectar Sleep are so comfortable is the fact that the models are made completely of foam, with a comfort layer made from memory foam, support layers made from poly foam, and then a cover made from a blend of polyester, nylon, and polyethylene.

The price of a mattress from Nectar Sleep varies depending on the size of the mattress.

For a general overview, you should expect to pay the following:

However, Nectar Sleep and other online retailers which sell products by Nectar Sleep often have discounts and offers on their mattresses.

This means that if you’re looking for a good deal, you might be able to snag a good-sized mattress for under $1,000.

In general, a mattress from an average company will cost you between $200 and $1,500, with premium mattresses generally setting you back upwards of $5,000.

Conversely, if you’re looking for a budget mattress then you may be able to purchase one for around $150.

This means that mattresses by Nectar Sleep are fairly midrange, whilst still maintaining a high quality and customer satisfaction. Currently, the market leader for online-purchased mattresses is Nectar Sleep, supplying to over 49 states in the United States. The prices of a single mattress vary from around $399 to $1,798 depending on size.

Along with mattresses, Nectar Sleep also produces bed frames, weighted blankets, and more – all of which are primarily manufactured in China.

link to Does Nectar Mattress Get Softer? (All You Need To Know)

Lindsey, do you know if Nectar mattresses get softer or what is the adjustment period for Nectar mattresses? This is one of the questions our readers ask a lot. Well, we´ve got you covered. If...

Have you ever asked yourself or your friend if Nectar mattresses have fiberglass and what are the best mattresses without fiberglass? Well, you are at the perfect place to find the answer to such a...