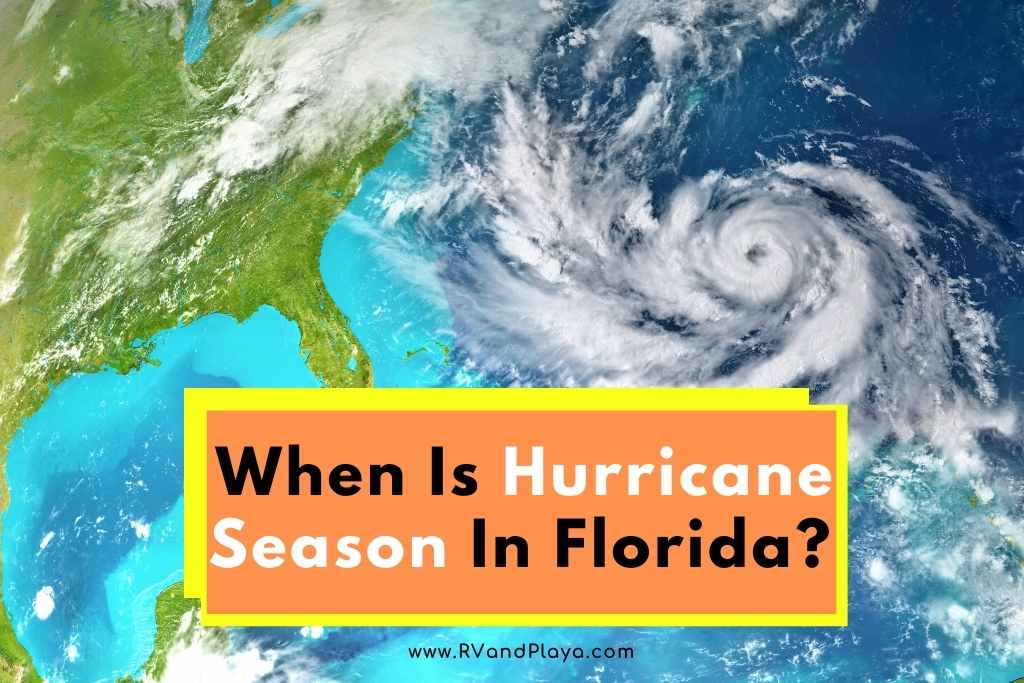 Do you know when is hurricane season in Florida, on Gulf Coast? Well, you are at the perfect place to find the answer to such a question.

There are many beautiful and very attractive aspects to life in the Sunshine State, including the incredible weather that warms the region for most of the year.

Unfortunately, though, there is a downside to being in such a coastal and tropical location: hurricanes. You might be wondering, when is hurricane season in Florida?

The hurricane season in Florida is six months long, lasting from June 1 to November 30.

This article will tell you everything you need to know about the hurricanes that Florida faces and when exactly they are likely to occur.

What Is A Hurricane?

To fully understand how this very particular weather phenomenon affects the Southeastern tip of the United States, we need to know exactly what it is that we are talking about.

Hurricanes are rapidly rotating storm systems with a low-pressure area directly in the center. Strong winds build up in a spiral pattern that is typically filled with heavy thunderstorms, powerful rain, and sudden sharp wind speeds known as “squalls”.

A hurricane is also known as a “tropical cyclone”, although many other terms are used as well. You might have heard them referred to as tropical storms, typhoons, cyclonic storms, tropical depressions, or cyclones – depending on how strong they are and where in the world they occur.

Although the terms are often used interchangeably, there are a few key differences between these kinds of storms from a meteorological perspective.

This categorization is one of the reasons why it seems as though Florida receives far more hurricanes than other places.

Not only does the region have the climate and geographical features where this kind of storm can develop, but the term “hurricane” itself is specific to some parts of the world.

When Is Hurricane Season In Florida?

Florida is a state that is affected by hurricanes almost more than any other, and there are long periods of the year when they are most likely to occur.

Hurricane season officially lasts from the beginning of June until the end of November, for a full six months. The peak of this period is between the middle of August and late October.

Since 1851, there have been at least one known tropical storm in the state almost every year. Only 18 seasons have come and gone without a significant Floridian hurricane.

Cumulatively, these storms have caused over 10,000 deaths and more than $200 billion in damage.

Although hurricane season is when the storms are most common, Florida has actually experienced hurricanes almost every month of the year. January and March are the only two months in the state with no hurricane on record.

Not all of these hurricanes have been highly dangerous and damaging, however, and major hurricanes (with wind speeds of over 100 knots) only make landfall once every few years.

There have been around 15 truly powerful hurricanes since the early 1900s in Florida that have caused the most damage – with Hurricane Michael, Hurricane Irma, and Hurricane Andrew being the most destructive.

Why Does Florida Keys Get Hurricanes At This Time Of Year?

So, why is it that this particular time of the year is so fraught with tropical storms? It’s all to do with how they form.

Most hurricanes develop in the Intertropical Convergence Zone, which is where northeasterly and southeasterly winds meet over the ocean.

This is an area of low pressure, where the air starts to heat up due to the warmth of the tropical ocean below. As this air rises, clouds begin to form and grow into thunderstorms.

When the air is particularly warm and moist, it will rise rapidly and start to rotate due to the rotation of the earth.

If conditions are right, the speed of the air movement will increase and more moist air will join the storm, creating intense wind and heavy rainfall.

A few things generally need to be happening in order for a hurricane to form:

The intensity of the storm will also be directly related to the temperature of the water that it travels over.

Most hurricanes occur during mid-to-late summer because this is when the temperature of the ocean is at its highest, and the pressure and wind conditions are suitable.

How Do You Know How Bad A Hurricane Will Be?

Knowing exactly when hurricanes are likely to happen in Florida is just part of the picture. It is important that you understand just how dangerous any individual storm might be, and that you know how to prepare yourself and your property in the event that a hurricane is on its way.

The first thing to be aware of is the information that you can receive about potential hurricanes, and just how bad they might be.

It is very difficult to predict the formation and movement of hurricanes, but the National Hurricane Center (http://www.nhc.noaa.gov/) has the most up-to-date and accurate information. Around 2-3 days prior to a hurricane reaching Florida’s shores is when predictions become particularly reliable.

Pay attention to the warnings and updates that forecasters put out. An Extreme Wind Warning/Advisory means that you should take shelter immediately within a strong and stable permanent structure.

You will often hear the term “category” when talking about hurricanes. These “categories” are part of the Saffir-Simpson Scale, and they indicate the intensity of the storm and the kind of damage that is likely to occur.

You should also be aware of the most significant risks to your person and your property during a storm like this.

The three major causes of damage and injury during a hurricane are:

How Can You Prepare For A Hurricane?

Hurricane preparedness is extremely important when you are living in or traveling to Gulf Coast, particularly during the hurricane season.

As these storms are so difficult to predict, you may only have a few days of warning before they reach land, so you should have a plan in place well in advance.

Power outages and a lack of access to resources are big problems that you might face during a hurricane. Having an extra tank of gas and a store of water and non-perishable food can be life-saving. So, when is hurricane season in Florida?

Florida’s hurricane season lasts from June 1 to November 30, with the most intense period being between mid-August and late October.

This time of the year is when conditions over the ocean are most conducive to the formation of tropical storms, though they have been known to hit Florida almost every month of the year.

Make sure that you know what to do in the event of a large and powerful storm so that you are prepared before the time comes.

Do you know what Allstate roof replacement policy is? Well, you are at the perfect place to find the answer to such a question. If you have Allstate home insurance, you may be wondering if your...