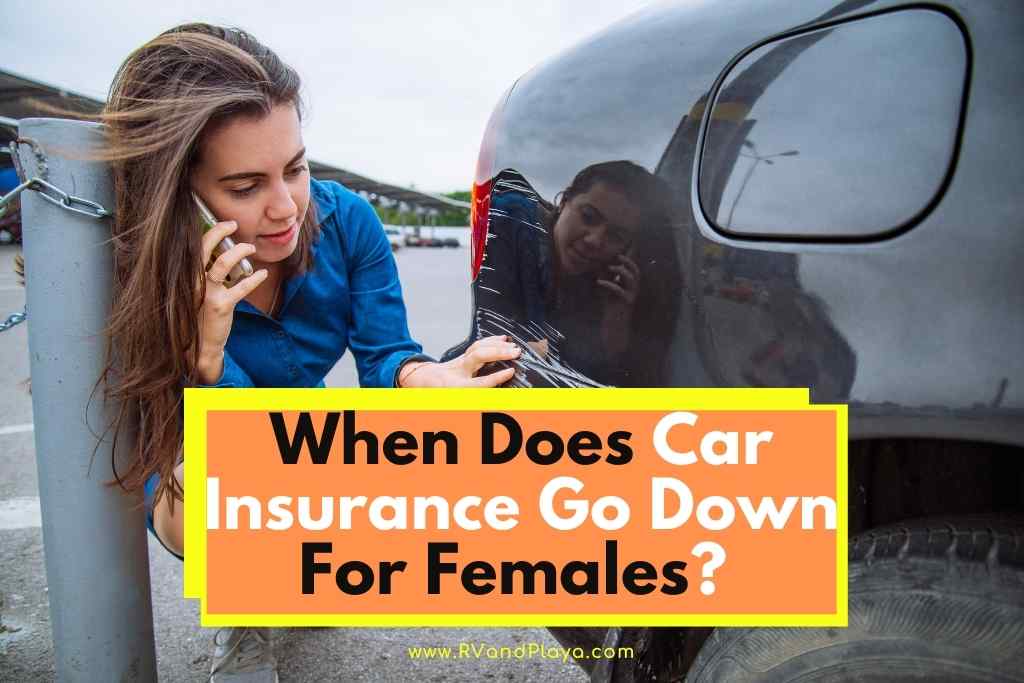 Do you know when does car insurance goes down for females? this is one of the questions our readers ask a lot. Well, we´ve got you covered.

Ladies, you’re in luck! Generally speaking, you pay less than men do for car insurance (especially as a young driver).

While this is definitely a reason to celebrate, it’s still not affordable to be a young female driver.

So, it’s only natural that you start to wonder, when will my car insurance go down as a female? Analysis has shown that car insurance significantly decreases between 17% and 27% for females when you turn 21 and 19 years old (approximately 16%). People tend to have the magical milestone of 25 in their heads when they consider reduced insurance rates.

But is that really how it works? Does a 25-year-old woman pay significantly less for her car insurance?

When Does Car Insurance Go Down for Females?

There’s no doubt about it that your car insurance goes down when you hit the ripe old age of 25. However, it doesn’t reduce by as much as you probably think.

Surprisingly, analysis has shown that your car insurance decreases more when you turn 21 (between 17% and 27%) and 19 years old (approximately 16%).

Consult the table below to get a clearer understanding of how the car insurance rates go down for females:

As we mentioned, women pay less than men for their car insurance rates.

So, let’s have a look at the sometimes astonishingly different prices for men and women aged between 16 and 80 years old.

Read also: How Much Does Car Insurance Go Down After 1 Year with No Claims?

The Average Auto Insurance Rates by Gender and Age

The table below shows the average insurances rates by gender and age:

At 35 years old, you’ll notice that the insurance prices level out, and as both genders age, men start to pay less than women from 40 to 45 years old.

Why? The increase is considered to be due to the various distractions that women generally have in their car around this time, such as babies, children, and their baby bumps.

Nowadays, we’d argue that it’s a very traditional, conservative way of thinking. Men are just as likely to have these distractions in the backseat of their cars.

But, as it stands, insurers still use this as a basis for charging males less during this time.

However, there comes a point that both females and males start to pay a bit more for their car insurance.

Also, when you hit 65 years old, your rates will increase as the potential decline in cognitive function, slower reaction times, and poorer eyesight make elderly drivers a more significant risk.

Read also: Is Car Insurance a Waste of Money? (The Truth – Nobody Is Talking About!)

The main reason you (a female) usually pay less than men is that you’re considered less risky.

Typically, men spend more time behind the wheel, resulting in driving more miles than women and making them more likely to participate in dangerous driving activities, such as:

According to the Insurance Institute for Highway Safety (otherwise known as the IIHS), men have died in car accidents twice as much as women in most years from 1975 to 2019.

In fact, 2019 saw 71% of all fatal motor deaths be men, as per the US Department of Transportation’s Fatality Analysis Reporting System.

With all that said, many other factors besides gender contribute to the price of car insurance. The factors include but are not limited to the following:

Read also: How Much Will My Insurance Go Up After a Ticket? (Speeding Ticket)

The Most Affordable Car Insurance Providers for Females

The particular price of your car insurance will also largely depend on the provider you choose.

Below you’ll find some of the most popular car insurance companies and their rates, so you can easily find a cost-effective solution:

How to Save on Car Insurance Rates

If you don’t fancy waiting years for your policy rate to reduce, here are some ways you can save a decent chunk of change, even while you’re still a young driver.

#1 Look Into the Discount Schemes

If your automobile is worth less than $4,000, there’s no point in paying for collision or comprehensive coverage. It’s just not worth the claim payout.

Alternatively, you can raise your deductible (consequently lowering your premium) for vehicles worth over $4,000.

There are plenty to use; just make sure you spend time answering all the questions, so the quotes are as accurate as possible.

There you have it! You’re now an expert in when car insurance goes down for women.

Be sure to spread the word and share this article to end all misconceptions about reductions in car insurance prices.

Hi! I'm Marissa. A personal finance nerd, content writer, and Managing Editor. I'm here to bring you all the latest cool ways to save, make and invest extra money. So, helping you to live your dream life!

link to When Does Gap Insurance Not Pay (9 True Reasons)

Have you ever wondered when does gap insurance will not pay you? Well, look no more. We´ve got you covered. Gap cover insurance is a vital option when your vehicle's book value is less than the...

In every state, RV insurance is required. Protecting your camper or RV is just as important as protecting your home or car; after all, it is your home-on-wheels. Let’s take a look at some of the...