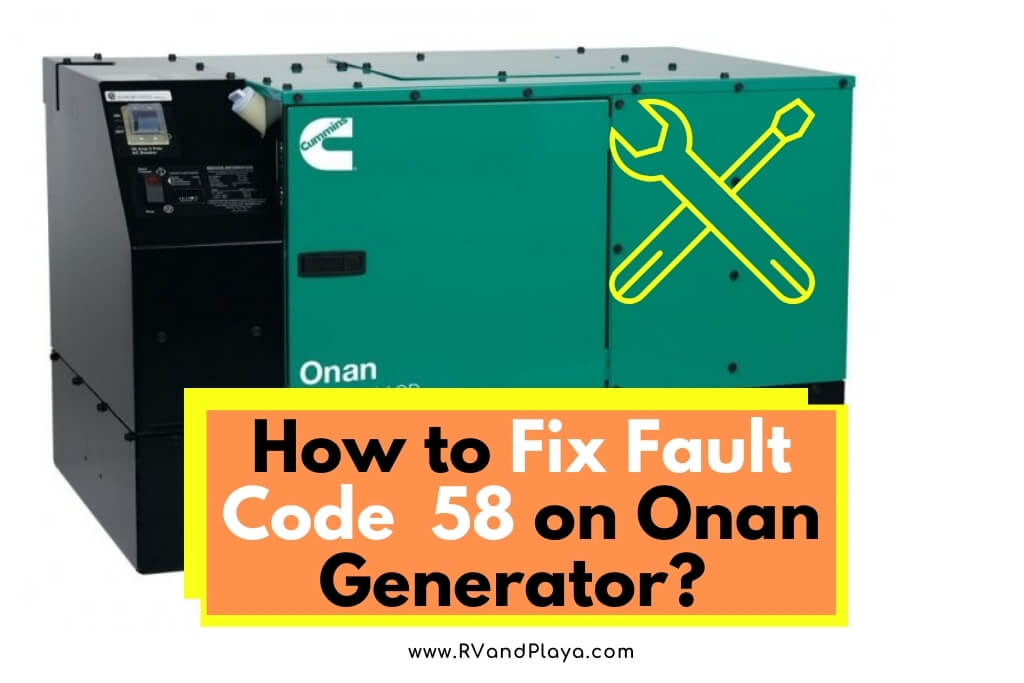 On Onan generators, fault code 58 is one of the rare situations in which you could find yourself as an RV owner.

There are several reasons why your genset could show this code, and the common thing for all of them is to lead to a considerable increase in the exhaust gas temperature.

Figuring out which exact potential cause is the culprit, can be a bit complicated task, but it is also something you need to do before attempting to solve the problem.

This fault code will lead to the generator shutting down, which is not something you would like.

Most of the potential issues that can lead to the fault code 58 you will not be able to fix without professional help.

Another thing you should have in mind is that attempting to fix some issues by yourself will void your warranty.

But, before you grab the phone to schedule a visit to the shop, keep on reading to find what you can do to fix this problem.

What is Fault Code 58 on Onan Generator

The fault code 58 is displayed by your Onan generator when the temperature of exhaust gases is higher than 1200 degrees Fahrenheit for a duration of 2 seconds.

Most commonly this is caused by problems with the ignition system that can lead to improper fuel combustion in cylinders, which is then ignited in the exhaust manifold.

Some of the causes of this situation you can troubleshoot yourself and fixing them is quite straightforward.

But, fault code 58 is not mapped on older Onan models, which are certainly out of warranty.

It is present on newer models that commonly are still in their warranty, and you should be aware that just attempting to diagnose some things can void it.

So, the best course of action, in the case of fault code 58, is to take it to your RV dealership or Cummins/Onan shop, or the very least to consult with your dealership about what will void your warranty and avoid doing it.

Before troubleshooting any fault code, or attempting to fix the underlying problem, it is a good idea to make sure which one it is.

Though, there are chances you are already fairly certain about the correct fault code, as searching for the solution has most likely brought you here, it is still a good thing to make sure about it.

The Onan generators have a very elegant way of displaying the error code by flashing the indicator light on the STOP/PRIME switch.

This pattern will go on repeating for five minutes and then stop, though you can stop it yourself by pressing the STOP/PRIME button twice in quick succession.

“If the first group is made of five and the second is made of eight flashes, you are dealing with the fault code 58, but if it is some other number of flashes it is a different code.”

You should count the flashes at least twice, to make certain, because if you miscount one of the groups you could have instead fault code 48 or 57 on your hands.

There aren’t many things you could do to either troubleshoot or fix the problems that can cause the fault code 58.

You would need to remove the generator from your RV to fix the most common problems, which can be slightly complicated when doing alone, and trying to solve other potential problems will void your warranty.

If your generator is still covered, the best course of action is to take it to a professional shop.

But nonetheless, here are things you can do yourself.

Step #1: Check exhaust for any blockage

The simplest way is to feel with a rod that is flexible somewhat whether exhaust is blocked by something or not.

On many Onan generator models, between carburetor and oil dipstick is a slotted shaft with teeth to which governor rod spring should be attached.

It should be positioned on the fifth sloth when counting from the right side, in case that it isn’t you should adjust it.

You should also check the governor rod for binding, in case that the fault code 58 happens when the generator is not under load, by slowly pushing and pulling on it and feeling whether it moves smoothly.

If there is binding, it needs to be repaired or replaced.

Causes of the Fault Code 58 You Can’t Fix

If none of the above is the cause of the fault code 58, your only option, if you do not want to void the warranty is to take the RV to your dealership.

But, for information purposes, here are the things that can cause the fault code 58, but are better left to professionals.

Magnetos, in the simplest terms, put the spark in the spark plugs, in case that one or both are faulty the spark plug will misfire, and the fuel-air mixture will not be ignited in the cylinder.

Instead, it will be pushed into the exhaust manifold where it will burn because the manifold itself is hot enough to ignite it.

This in turn will increase the temperature of exhaust gases and cause the fault code 58.

The problem with the fuel burning inside the exhaust manifold is that the physical mass of the engine block serves as a heat sink when it burns inside the cylinder, thus in essence cooling exhaust gases.

When it burns in the manifold, there isn’t any of this cooling effect of the exhaust gases.

Replacing magneto is relatively easy, but it requires removing the generator from RV, and if you do it yourself, your warranty will be void.

If the valve leash is not adjusted properly, after a while pushrod can be bent due to a too high clearance, which causes the generator’s engine to, in essence, run on a lower number of cylinders.

For example, if the exhaust valve is bent and stays open, the compression stroke will always push the air-fuel mixture before it combusts causing it to burn instead inside the exhaust manifold.

When fault code 58 arises, there is a small chance that everything is actually fine with the temperature of the exhaust gases.

Instead, the cause of fault code can be either a faulty sensor, sensor wiring that has melted away and is shorting, or a faulty control board, in other words, a false fault code.

Trying to fix either of these three problems will lead to voiding your warranty, even though it is a quite straightforward part replacement if you disregard the need to take out the generator.

So it’s better to leave it to a certified shop to deal with it.

Preventing the fault code 58 from happening again is not as simple as it sounds, because most of the causes are simple manufacturing defects of parts that haven’t been caught by quality control.

One thing you can do to decrease the already low chances of this happening is to replace the spark plugs at a regular maintenance interval of 500 work hours.

If nothing else, it will eliminate spark plugs as a potential cause.

Another thing to keep in mind is that if an RV is stored for a prolonged time, such as a couple of years, some critter can come and start calling it home.

Small chances are that it could end up in the exhaust and building a nest there, or getting stuck and dying there.

So, if you are dealing with an RV that was stored for a longer time, it is a good idea to poke around and inside the exhaust of the generator before starting it.

link to How Many Hours Should an Onan Generator Last? (All Facts)

Have you ever wondered how many hours should an Onan generator last? Look no more. We´ve got you covered. RVs are perfect for taking the luxuries of the home onto the road with you. One of the...

Continue Reading
link to Can You Jump Start A Generator Battery?

Have you ever wondered how to jump start a dead generator battery? Look no more, we´ve got you covered. Generators are great for portable power when traveling, camping, or when your house’s...