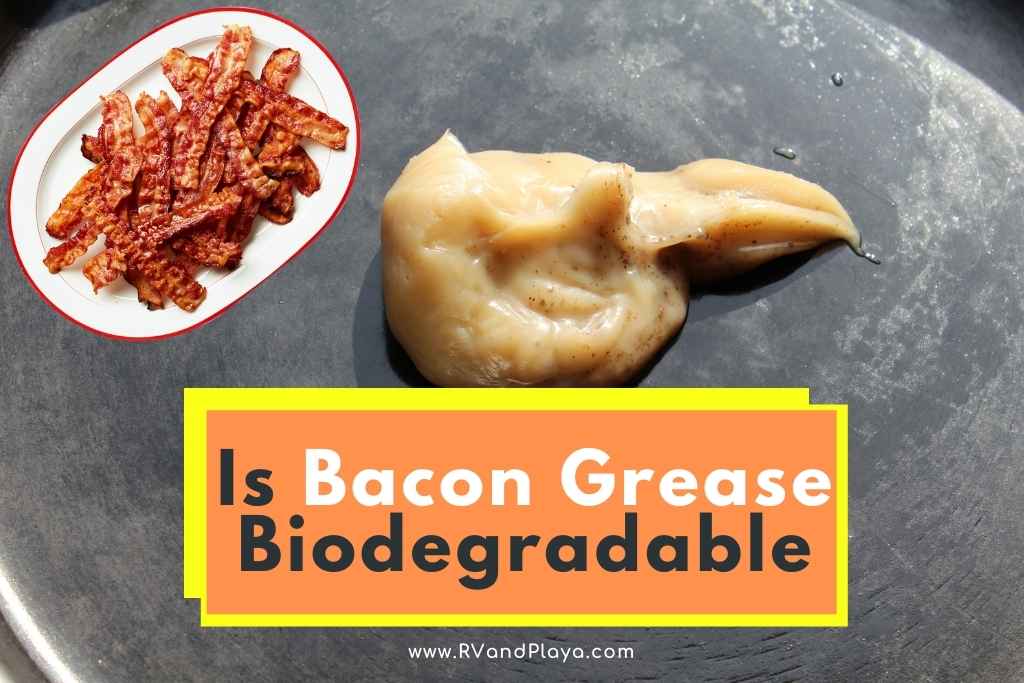 Have you ever asked yourself or your friend if Bacon grease biodegradable is and how to dispose of Bacon grease? Well, you are at the perfect place to find the answer to such a question.

Everyone knows that you should not put bacon grease down the drain, but many people wonder whether or not bacon grease can be disposed of in other ways.

For example, is bacon grease biodegradable?

To learn more about the technicalities of whether or not bacon grease is biodegradable, keep reading.

Based strictly on the definition, bacon grease is biodegradable. If it is exposed to the scorching sun, the elements will break down the grease so that other living organisms can eat the remaining bits.

Unfortunately, it’s a bad idea to place bacon grease outside or in a compost pile. Although it technically is biodegradable, it needs direct access to the sun, or else the microbes will not break down the grease.

Because of this fact, you should not dispose of bacon grease the way you do other biodegradable objects.

This is the same for most other grease types. Most greases are technically biodegradable, but it is very difficult for them to decompose properly.

There are a few specially made grease types that are biodegradable, but these are man-made.

Read also: How Long Can You Keep Bacon Grease On The Counter (Finally Explained!)

Can I Compost Bacon Grease?

It simply is not an easily composted material, and you’re putting your compost pile at risk if you add bacon grease inside.

There are two main reasons why bacon grease should not be composted: it’s hard to decompose properly and it will attract pests.

The first reason is that bacon grease needs direct sunlight in order to decompose properly. Once you put other biodegradables in the pile over the bacon grease, it will stop composting properly.

It will just sit in your pile and likely throw off the decomposition process of the other organic matter inside.

The second reason you should not put bacon grease inside a composter is that it will attract pests and other insects.

Rodents are especially likely to try to get into your composter if bacon grease is put inside. Bacon grease gives off a delicious smell, and rodents will try to find where the smell is coming from.

Because bacon grease is not easily composted and will attract pests in the meantime, do not put bacon grease in a composter. It will do more harm than good.

Read also: How Long Can You Keep Bacon Grease In The Refrigerator?

How To Dispose Of Bacon Grease

Since you cannot compost bacon grease, and you can’t put it down the garbage disposal either, you have to know how to safely dispose of this material.

In short, we recommend either disposing of it in the trash can or saving the bacon grease to be used at a later point. Let’s take a look at both options.

If you just want to throw away the bacon grease, all you need to do is wait for it to cool down. Whenever it cools down, it will become a thick texture that you can scoop up with a paper towel. Scoop up the bacon grease and throw it away. It is as simple as that.

This method is ideal if you do not anticipate using the bacon grease now or in the future.

If you enjoy cooking with bacon grease, you can simply reuse the bacon grease you have so that you can cook with it later on. Reusing bacon grease takes a little bit more effort, but it is still super easy and will put that bacon grease to use.

Find a sealable glass container, such as a jar. Place a cheesecloth over the top of the jar and strain the grease into this container while it is still hot.

If you wait for the bacon grease to cool down, you won’t be able to pour it. Make sure it’s not so hot that you end up burning yourself. Label the jar.

How you store the jar depends on how quickly you anticipate using the bacon grease. If you will use it almost right away, you can put the jar on your counter and store it at room temperature.

You can toss it by throwing out the entire container or using a paper towel to scoop it up.

Technically, bacon grease is biodegradable, but it isn’t biodegradable like most other objects. Instead, it requires the scorching sun to break down the grease a bit before the microbes will touch it.

In the meantime, the rodents will likely come for the grease.

For these reasons, we do not recommend adding bacon grease to your compost pile. You will attract insects, and it could throw off the quality of your compost.

Although it might be tempting to try composting your bacon grease, we do not recommend it.

link to How Long Can You Keep Bacon Grease In The Refrigerator?

Do you know how long you can keep bacon grease in the refrigerator? this is one of the questions our readers ask a lot. Well, we´ve got you covered. If you don’t expect to use your bacon grease...