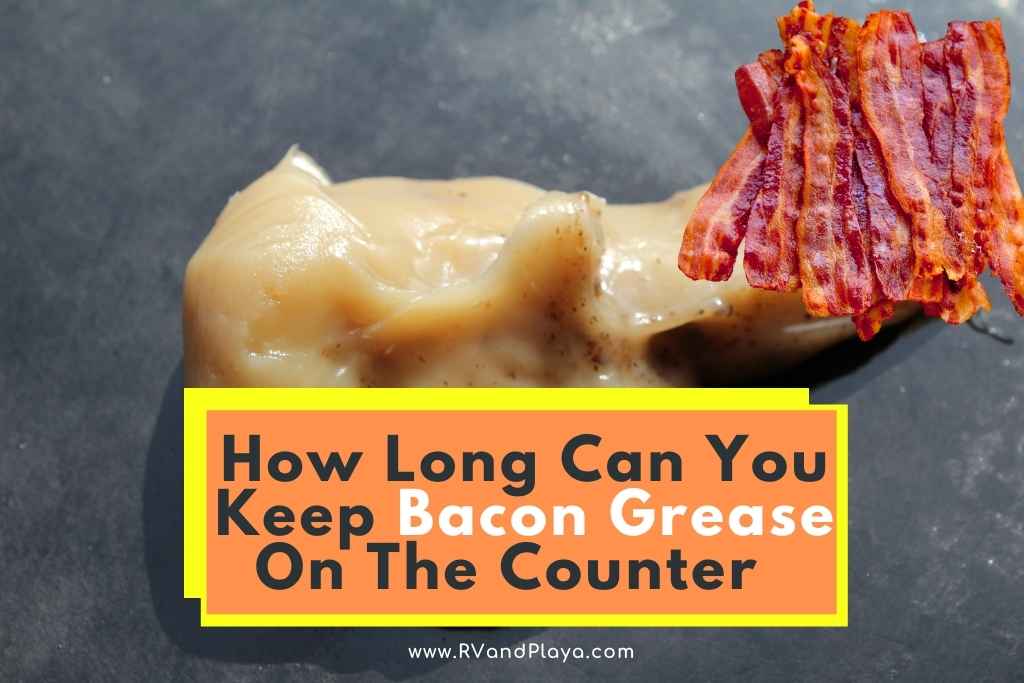 Have you ever asked yourself or your friend how long you can keep bacon grease on the counter or how long does bacon grease last? Well, you are at the perfect place to find the answer to such a question.

Bacon on its own is absolutely delicious. The grease that is left behind is delicious as well. That is why some of the best home-cooked meals are made with bacon grease specifically.

The good news is that bacon grease can be stored for quite a while before it goes bad.

Keep reading to learn more about how long you can keep bacon grease on the counter, in the pantry, in the refrigerator, or in the freezer.

How Long Can You Keep Bacon Grease On The Counter?

Whenever it is placed on the counter, you expose it to changes in temperature and light, which will make the bacon grease go bad faster.

With this in mind, you should only store bacon grease directly on the counter if you anticipate using it quickly. If you want it to last for a bit longer, you should look for other ways to store your bacon grease to extend its lifespan.

What Are Other Ways You Can Store Bacon Grease?

Even though bacon grease stored on the counter should be used within a week, there are other ways that you can store bacon grease so that it lasts as long as possible.

These three other methods will help to extend the lifespan of the grease so that you can use it at a later date.

The reason why bacon grease will last longer in the pantry than on a counter is that it is exposed to fewer changes in temperature and light.

Select a pantry that is as far away from the stove and oven area as possible so that the pantry stays cool.

The bacon grease will taste best if you use it within a couple of weeks, but it can last anywhere from three months to a year inside the refrigerator.

To help avoid this, store the bacon grease in an airtight container and place it as far away from smelly food as possible.

Storing bacon grease in the freezer will extend its life span the most. Bacon stored in this way is also less likely to take on other smells since smells are kept to a minimum in the freezing cold temperatures of the freezer.

Bacon grease stored in the freezer can often last up to one year.

We don’t necessarily recommend waiting a whole year to eat your bacon grease, but it certainly can last a long time in the freezer, making it the best method for those who don’t know when they’ll use the bacon grease next.

What Are Signs That Bacon Grease Has Gone Bad?

The time frames given above are just estimations. For this reason, you always want to double-check any stored bacon grease before you use it.

This will prevent you from consuming any bacon grease that has gone bad. Here are signs that it’s time to toss your bacon grease in the trash:

The first sign that bacon is bad is the smell. Once bacon goes bad, it will have a rancid smell that is pretty obvious. If your bacon grease smells funky, it has gone bad.

Consuming the bacon grease can be dangerous if mold is on the top or anywhere else in the jar.

If your bacon grease smells weird or you see mold in the container, throw it out immediately. Even if you aren’t quite sure if what you are seeing or smelling is a sign of bad bacon grease, it’s better to be safe than sorry.

Toss the bacon grease and find another alternative instead.

If you need your bacon grease to last longer than a week, there are many other storage options you can select instead.

No matter which storage method you select, make sure to double-check the bacon grease before you start cooking with it. If it smells rancid or has signs of mold, toss it out immediately.

link to Who Makes Great Value Bacon? (Products For Walmart)