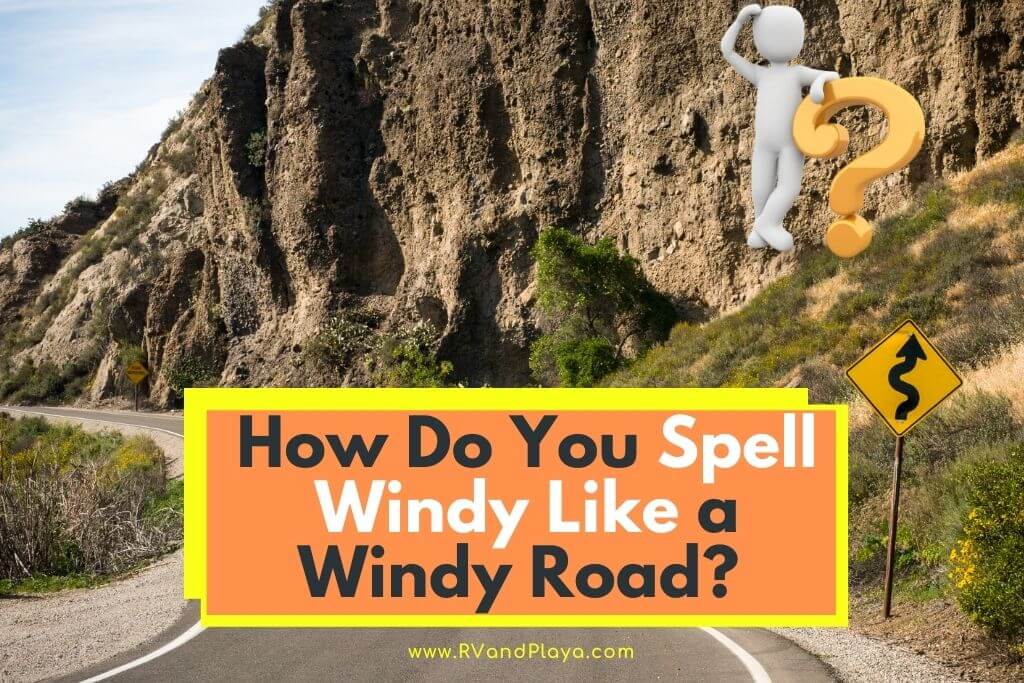 Wondering how do you spell windy like a windy road? The English language is complicated to learn. It borrows grammar and spelling from many cultures and languages, which can make it complicated to spell different words.

Furthermore, some words are spelled very similarly but with increasingly varying pronunciations.

One example is the word windy, which has two definitions. Understanding the usage and spelling of this is based on context.

How Do You Spell Windy Like a Windy Road?

If you want to describe a road with lots of twists and turns, it is spelled “windy.” This is pronounced like “wine-dy.”

Most of the confusion in spelling this word comes from the fact that there is another word spelled the same, with a completely different meaning.

Windy, as in weather with strong winds, is spelled the same. When speaking of the weather, the word is pronounced “Win-dy.”

The first syllable is pronounced with an open I sound, like in the sentence “I will win this race.”

Another word with the same meaning and less confusion with pronunciation is winding. You can essentially use winding in the same way you would use windy without changing the meaning of the sentence.

For example, You will need to drive down a windy road to find the cabin.

It has the same meaning as: You will need to drive down a winding road to find the cabin.

Some consider windy to be a diminutive of winding. A diminutive is a word meant to shorten another word, much like people can shorten Robert to Bob.

Many people use windy as a less formal form of winding. If you are looking to elevate your writing, use winding to be precise and avoid confusion with the adjective that describes the weather.

How to Pronounce Winding >> Check out the video below:

The etymology of Windy (Twisted, Turning)

Windy traces its origins to the word wind (pronounced “wine-d”). To wind means to move through turning and twisting.

The word wind has origins in several different languages. In old English, windan meant to turn or twist. Proto-Germanic used windan to mean wind (like winding a clock through turning).

Gothic and Dutch use winden. German uses winden or wintan (depending on dialect). So, the word can be traced back to many languages that have influenced English.

To wind is also related to the words “wend” and “wander.” In Middle English, the word evolved to mean “to twine, to entwine oneself around.”

The etymology of Windy (Weather)

Windy, as in weather characterized by gusts of wind, has a different etymology than windy as in a circuitous road.

Windy comes from both Old English and German “windig,” which translates to windy as we use the word today.

Windy itself is also related, unsurprisingly, to the word wind (as in gusts of wind). The word for wind is related to Middle English, Old English, and German “wint.”

The Greeks used “aēnai,” which meant “to blow.” In Sanskrit, the word is “vāti,” and means “it blows.”

Read Also: Is February 19 a Pisces or Aquarius? (Zodiac)

The Long and Winding Road

In truth, “the long and winding road is more elegant and clearer.

Paul McCartney wrote “The Long and Winding Road,” and it was released on The Beatles’ Let it Be album. It became a number one hit in 1970 for the band.

There was contention surrounding the post-recording production of the song, and since its original release, both Paul McCartney and The Beatles have re-recorded the song with simpler instrumentation.

If you want to avoid the windy/winding/windy (weather) confusion entirely, there are plenty of other terms you can use to substitute for the troublesome adjective.

If you frequently catch yourself using “windy” in your writing, substituting these synonyms can also add greater variety to your writing and make it more interesting for your readers to enjoy.

Windy as a Name

Windy has also been used as a girl’s name. The most common pronunciation for this name is akin to the word windy as it relates to the weather.

Windy is a name used for girls in the English language. It was popularized with names like Sunny and Stormy. The name peaked in popularity in the 1970s and dropped in popularity as the 1980s began.

Where is the Most Winding Road in the World?

Stevio Pass in the Italian Alps is the most winding road in the world. The road is about 29 miles (47 kilometers) long, and it is characterized by intense switchbacks and brutal turns for any driver.

It has 48 “hairpin bends,” which are notoriously difficult.

Another danger of the Stevio Pass road is the altitude. It is almost the highest paved road in the Alps.

The Stevio Pass Road is used as a racing course for a “hill-climbing” event. Often in these events, cars are competing against the clock and not driving all at the same time, as a crash could lead to a catastrophe.

The Stevio Pass Road was also deemed the “greatest driving road in the world” by the show Top Gear in 2008.

Tips for Driving on Winding Roads

Driving on curvy roads can be dangerous, particularly in adverse conditions like rain or snow. Winding roads can also be dangerous when they are coupled with steep mountainsides, as they often are.

One of the best ways to stay safe on a winding road is slow down. Slowing down before a curve will help you stay in your lane and stay in control.

Many roads have suggested speed limits for twisting roads. These speed limits are not enforced, but they are speeds that will be safe in most weather and around most curves.

Often these signs are yellow in color rather than white. Yellow signs are recommended or for warning about curves, where white signs designate that the actual speed limit of the road has changed.

2. Avoid Skidding by Minimizing Your Turn

One tactic to avoid skidding on corners is to turn as little as possible. This may mean you drive closer to the edge of the lane in order to make a turn less sharp.

3. Accelerate Out of the Turns

Words with the same spelling but different pronunciations or meanings are known as homographs. Windy (weather) and windy (curvy) are homographs.

Many other words are homographs, and the best way to understand the meaning is through considering the context of how the words are used.

When talking about a circuitous road, the word is spelled “windy.” This causes confusion for many because the adjective to describe things characterized by gusts of wind is also spelled “windy.”

The two words are homographs.

Jessica is co-founder of RV and Playa and loves sharing her enthusiasm for the Beach- and RVing lifestyle. As a full-time RVer since December 2017, Jessica playful writing style helps make learning about RV a bit more interesting. Nothing is as freeing as being on the beach (Playa), lacing your feet with the sand, having the water lap your legs and becoming one with nature.

link to What Do You Get When You Mix Red and Green? (Three Colors of Light)

Wondering what you will get when you mix red and green color? Life is full of beautiful colors. As humans, we can perceive such an array of colors to enjoy the entire rainbow and varying shades of...

Are you looking for the meaning of mood ring colors? Look no more. We´ve got you covered. Mood Ring Colors are the physical properties of a material. The ring changes color because the metal’s...