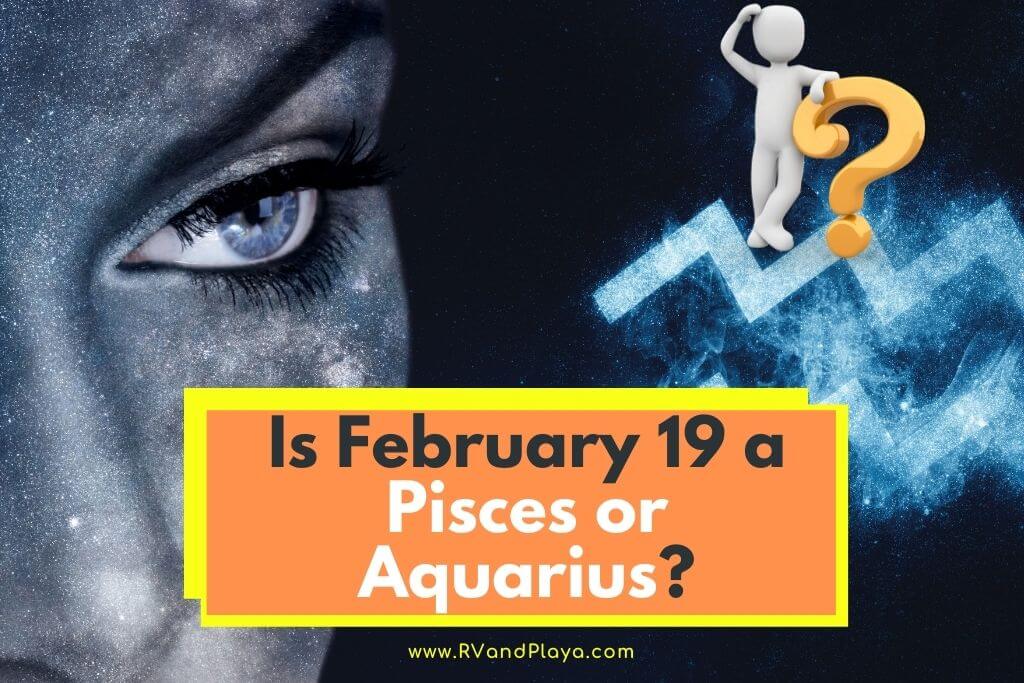 However, they do not always correspond to a single month because they do not follow the Gregorian calendar.

Understanding astrological signs means diving into their origins and the mythology associated with each sign.

Is February 19th a Pisces or Aquarius?

Aquarius season ends on February 18th. It lasts from January 20th to February 18th, so anyone born in that period is an Aquarian.

When Are the Zodiac Seasons?

History of Astrology and the Zodiac Signs

For centuries, the stars have offered guidance to humanity about life, nature, love, and more. Many people know of the tradition of using the North Star as a guide while traveling.

Ancient peoples were experts at charting courses based on information they could find in the stars.

Ancient civilizations would make predictions for their crops based on where the stars were located.

Astrology and zodiac signs are likewise ancient methods of using the stars to understand how the world around us works.

Records show that ancient Chinese noblemen would use the stars to predict the fortune of the current emperor.

The Babylonians tracked the movements of Venus and developed predictions based on it. The Venus Tablet of Ammisaduqa gives insight into using the planets and stars for guidance.

When Alexander the Great and the Greeks invaded the Babylonians, they ran with the idea of using the stars for divination purposes that the Babylonians had developed.

The Babylonians had divided the zodiac signs based on constellations, much of how the system we know today is based. The Greeks then labeled the constellations corresponding to their mythology.

Today, astrology assigns specific prominent constellations to dates throughout the year. People born on those dates are said to act in certain ways, given these divining practices set by the Babylonians.

The Constellations that Correspond to Zodiac Signs

Aquarius represents the dates from January 20th to February 18th. The constellation of Aquarius is known as the “water bearer.” Aquarius comes from Greek mythology.

In Greek mythology, Zeus sent his eagle to kidnap Aquarius, and Aquarius became the cupbearer for the Greek Gods.

Aries represents the dates from March 21st to April 19th. In Latin, Aries means “the ram.” The constellation looks like a set of ram horns. Aries is believed to be connected to the story of the golden fleece.

The golden fleece was thought to come from a golden-wooled winged ram. The fleece was used to establish authority.

Taurus represents the dates from April 20th to May 20th. Taurus means “the bull” in Latin. The constellation Taurus looks like the head of a bull.

The Greek story associated with Taurus is the legend of Zeus disguising himself as a bull to abduct Europa.

Gemini represents the dates from May 21st to June 20th. Gemini means “the twins” in Latin. It is meant to represent the Greek Dioscuri comprising of Castor and Pollux. The brightest stars in Gemini are also named Castor and Pollux.

Castor and Pollux are Leda and Zeus’ twin sons. They famously sailed with Jason on his journey to find the golden fleece.

Pollux and Castor are both renowned for their boxing skills. They are considered the gods of athletes and athletic contests.

Cancer represents the dates from June 21st to July 22nd. It does not refer to the tragic disease of the same name but rather to the Latin word meaning “the crab.”

It is believed to look like a crab. The Greek mythological story of this constellation is a crab that Hera sent to kill Heracles. After its defeat, the crab was sent to the stars, thus resulting in this constellation.

Leo represents the dates from July 23rd to August 22nd. As a constellation, Leo appears as a lion. Leo is associated with the myth of the Nemean lion in Greek mythology.

The Nemean lion had golden fur that could not be penetrated by mortal human weapons.

It had claws sharper than swords. Ultimately, Heracles was able to defeat the beast.

Virgo represents the dates from August 23rd to September 22nd. In Latin, Virgo means “the virgin.” It is a huge constellation.

In Greek mythology, Virgo is associated with Dike, the goddess of justice, and Persephone, the daughter of the harvest goddess.

Persephone’s abduction by Hades brought an end to eternal spring and gave the world seasons.

Libra represents the dates from September 23rd to October 22nd. In Latin, Libra means “the weighing scales.” Libra looks like a set of scales associated with the Greek goddess of justice, Dike.

Dike is associated with Virgo, the neighboring constellation.

Interestingly, Libra is the only constellation that depicts an object rather than a living creature.

Scorpio represents the dates from October 23rd to November 21st. It is one of the oldest constellations.

After being poisoned by an arrow, he released Prometheus and took Prometheus’ punishment. As a reward for his kindness, Zeus immortalized him in the constellation.

Capricorn represents the dates from December 22nd to January 19th. In Latin, Capricorn means “the goat.” The constellation looks like a sea-goat from Babylonian mythology known as Enki. Enki is the God of water.

In Greek mythology, Capricorn is often associated with Pan. Pan is a satyr and the God of the wild.

Jessica is co-founder of RV and Playa and loves sharing her enthusiasm for the Beach- and RVing lifestyle. As a full-time RVer since December 2017, Jessica playful writing style helps make learning about RV a bit more interesting. Nothing is as freeing as being on the beach (Playa), lacing your feet with the sand, having the water lap your legs and becoming one with nature.

link to What Do You Get When You Mix Red and Green? (Three Colors of Light)

Wondering what you will get when you mix red and green color? Life is full of beautiful colors. As humans, we can perceive such an array of colors to enjoy the entire rainbow and varying shades of...

Are you looking for the meaning of mood ring colors? Look no more. We´ve got you covered. Mood Ring Colors are the physical properties of a material. The ring changes color because the metal’s...