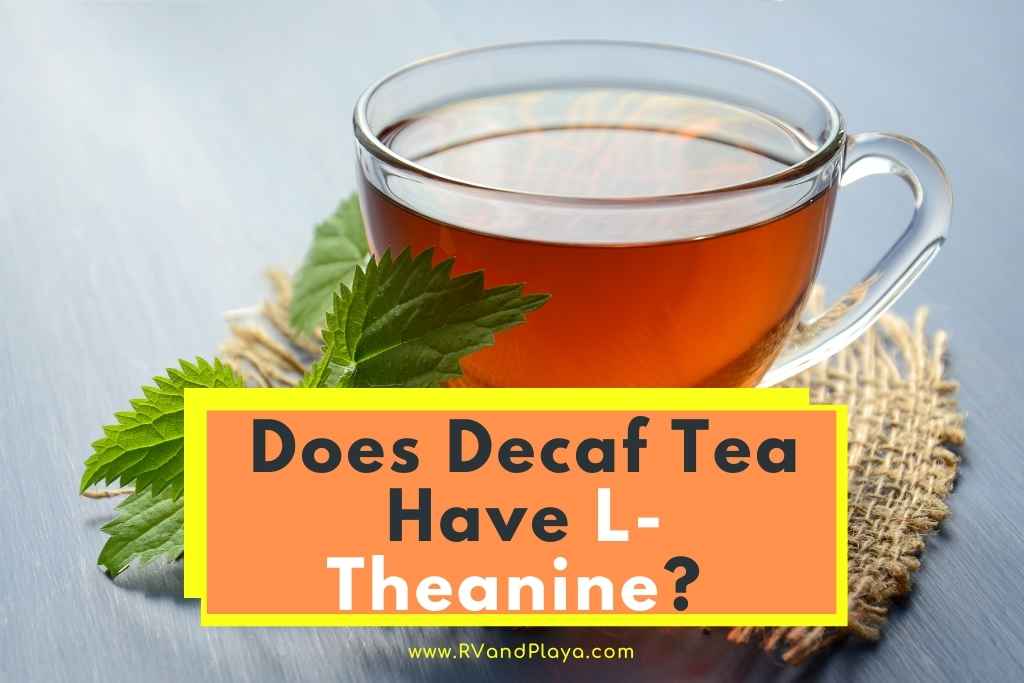 Have you ever asked yourself or your friend if decaf tea has L-Theanine? Well, you are at the perfect place to find the answer to such a question.

We’re talking about how much l-theanine is in decaf tea, as well as what is a healthy amount. We’ll also look at some pros and cons of l-theanine.

Keep reading to find out what decaf tea has to offer in terms of this amino acid.

How Much L-Theanine Does Decaf Tea Have?

Decaf tea has less l-theanine than regular tea but only slightly. It’s a common misconception that decaffeinated tea has less of everything compared to regular tea because of the process it goes through for removing caffeine. Thus, decaf tea is often viewed as less healthy.

The truth is, decaf tea does lose some of its nutrients and nearly all of its caffeine, but some substances stay intact throughout the decaffeination process. L-theanine is one of those substances.

What Does L-Theanine Do for You?

Read on for some more specific uses for l-theanine.

This amino acid is thought to help people strengthen their memories. As we get older and take on more responsibilities, we may find ourselves forgetting more and more things. L-theanine may be able to help you retain more information.

It may also improve your focus to allow you to think more clearly. Have you ever had one of those days where you feel scatter-brained and have a tough time focusing on tasks? L-theanine aids the brain in sticking to the thoughts needed to accomplish the task at hand.

Read also: Does Decaf Tea Have Tannins? (Is It Good? Tea Infusions + More)

L-theanine is said to have a calming effect that allows you to relax. It’s been used for centuries to help people relax and de-stress.

Studies have made connections between l-theanine and serotonin, as well as dopamine and GABA. These are all involved with the body’s stress responses and your ability to cope with certain situations. It makes sense that we view a cup of hot tea as a nice relaxing way to start or end our days.

We mentioned that l-theanine helps with focus and cognitive function. That allows for a higher level of mindfulness.

Throughout history, tea has been used in various rituals, during different ceremonies, and by religious groups. Many of these traditions were born out of the observation that tea helps with focus and mindfulness.

Since both regular and decaf tea have l-theanine in them, you can use either for any of these types of events.

What Kind of Tea Has the Most L-Theanine?

You’ll find the most l-theanine in green tea. L-theanine is part of the reason green tea is thought of as a healthy tea. It’s also what makes Matcha taste a little sweet. It has the sort of sweet yet bitter umami quality to it.

Black tea is a close second for amount of l-theanine. One thing people like about getting their l-theanine from black tea is it has more caffeine than green tea.

Many health conscious people drink tea for the amino acids like the effect they get from the combination of l-theanine and caffeine.

If you’re sensitive to caffeine, or you just don’t care to take it in, decaffeinated green tea is your best bet for getting the most l-theanine followed by decaf black tea.

What Are Other Sources of L-Theanine?

Mushrooms have small amounts of l-theanine. You won’t likely get enough of the amino acid from mushrooms to reap any true health benefits.

The main natural source of l-theanine is tea because it’s concentrated at the highest levels in tea leaves. Beyond your daily cups of tea, you can take l-theanine supplements. These come in pill, liquid, and powder forms.

Fans of energy drinks often get doses of l-theanine in their beverages. It’s a popular ingredient because it helps with focus and combines well with caffeine to give you a boost of energy.

How Much L-Theanine Should You Take In?

There haven’t been any notable side effects of l-theanine brought to light. Though it may cause some adverse effects when mixed with other substances like caffeine, they’re mild enough to be of little concern for most people.

On average, adults should take in from 100 to 200 milligrams of l-theanine per day.

One cup of tea has less than 100 milligrams of the amino acid, so you can either have more than just one cup a day, or you can supplement the rest of it in some other way. Some people simply add l-theanine powder to their tea so they get a higher dose.

Decaf tea has l-theanine in it at almost the same level as regular tea. A small amount of amino acids may get stripped away in the decaffeination process.

And depending on which process is used to remove the caffeine, some decaf teas retain almost all of the l-theanine in their leaves.

L-theanine is good for your body. It helps to de-stress and tamp down anxiety. It’s good for focus and also relaxation. So, whether you want to have a cup of tea to get your day going or have one at night to settle down, the l-theanine in it can help with either.

link to Does Decaf Tea Have Flavonoids? (Health Benefits + More)

Have you ever asked yourself or your friend if decaf tea have flavonoids? Well, you are at the perfect place to find the answer to such a question. Decaf tea, like regular tea, is rich in...

Do you know if decaf tea has caffeine?  this is one of the questions our readers ask a lot. Well, we´ve got you covered. Decaffeinated means caffeine-free, right? Not necessarily....