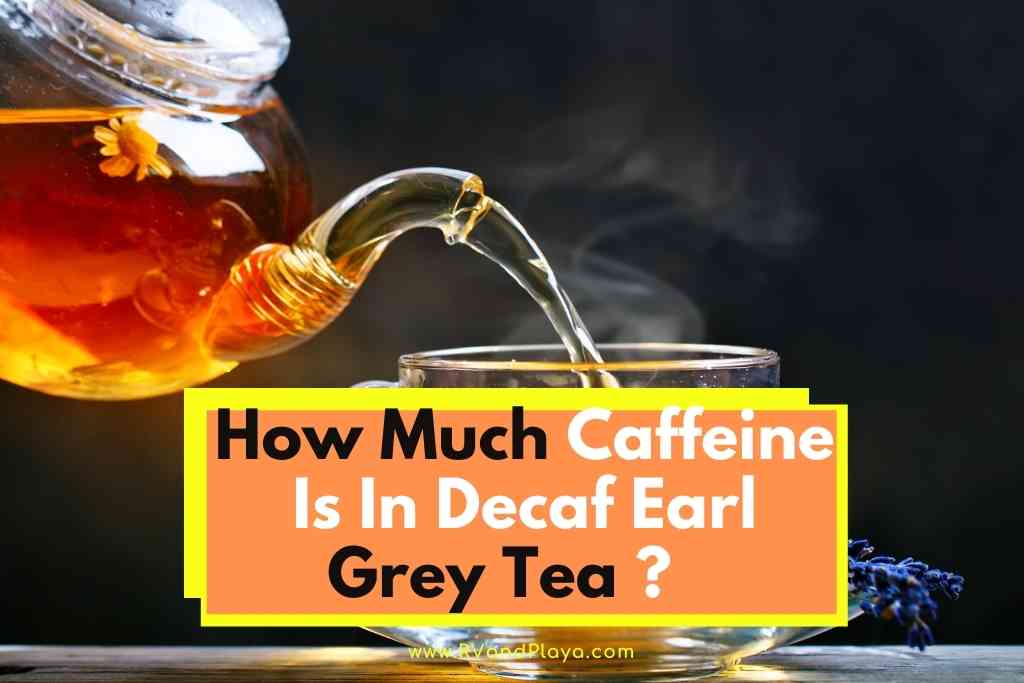 Have you ever wondered how much Caffeine is in Decaf Earl Grey tea? Well, you are at the perfect place to find the answer to such a question.

Tea can come in all kinds of flavors and levels of caffeine. There are even decaffeinated versions of the types of tea that contain high amounts of caffeine, like earl grey tea.

How Does the Caffeine Level of Decaf Earl Grey Tea Compare to Other Teas?

There are four generic types of tea all made from the same leaf but containing different levels of caffeine. Black, green, oolong, and white tea are all processed differently so that the end product has different benefits as well as different caffeine concentrations.

Earl Grey tea is a black tea that at full strength of caffeination contains 40 to 70 mg of caffeine per cup – the strongest of any of the teas. The decaffeinated version of earl grey tea contains about 10% or less the amount of caffeine of the full-fledged version.

If you are looking for a good cup of tea that has the least amount of caffeine, decaf earl grey is an excellent choice!

Read Also: Which Decaf Coffee Has The Least Caffeine? (Explained)

How Is Decaffeinated Earl Grey Tea Made?

Decaf Earl Grey tea tastes the same as fully caffeinated earl grey because the process of removing the majority of the caffeine is crafted to solely extract caffeine. Most tea processors use a procedure that involves pressure cooking the loose tea leaves with carbon dioxide.

The pressure and heat act as a catalyst for the carbon dioxide to remove the caffeine molecules from the tea leaves, leaving only a small amount behind. This method is preferred because it does not affect the flavor profile or the natural health benefits of the tea leaves.

You may find that decaf earl grey tea packages claim to be naturally decaffeinated. This is usually an indication of the ethyl acetate method as this compound is found readily within the tea leaves so it does not add anything new to the tea, just subtracts out the caffeine.

Does Decaf Earl Grey Tea Have the Same Benefits As the Full Caffeine Version?

Since the decaffeination process of earl grey tea only pulls out the caffeine, all of the health benefits from the other compounds left in the tea leaves are still available. Decaf Earl Grey tea contains fluoride to help protect and preserve the enamel on your teeth.

It has also been shown to have a plethora of antioxidants to prevent heart disease, extract free radicals that can lead to cancer, and cleanse your system of toxins. The bergamot oil found in decaf earl grey tea has vitamin C to help boost your immune system and prevent cold and flu symptoms.

Read Also: How Much Caffeine is in Kirkland Decaf Coffee (The Truth!)

Decaf Earl Grey tea can act as an aid to ease an upset stomach and help with digestion by serving as an anti-inflammatory. Most importantly of all, decaf earl grey tea is a great way to keep hydrated and add flavor to any part of your day.

The only benefit decaf early grey does not provide compared to regular earl grey tea is the boost of caffeine for energy. The amount of caffeine in the decaf version is typically not enough to substitute for a pick-me-up in the morning.

Why Does the Caffeine Level in Decaf Earl Grey Tea Vary?

Depending upon the tea processor, some places like to allow the leaves to soak or pressure cook for longer than others which may serve to extract more caffeine. Despite the method used, all earl grey tea packages labeled as decaf should contain at the most only 10% of the caffeine of the original leaves.

Decaf Earl Grey tea is an excellent choice if you are looking to cut down on your caffeine intake. While it is not completely caffeine-free, decaf earl grey tea only contains about 4 to 6 mg of caffeine per cup which is far less than any other type of tea including white, green, oolong, and other black teas.

There are two common methods of extracting the caffeine from the tea leaves to make decaf earl grey tea and neither of these affects the flavor or benefits of the tea itself.

Decaf Earl Grey tea can provide all the same health advantages as fully caffeinated earl grey tea including prevention of heart disease and cancer, anti-inflammatory properties, and a boost to the immune system.

If you are looking for the perfect cup of tea for any time of day, decaf earl grey tea is the way to go!

link to How Much Caffeine Is in Decaf Black Tea? (The Truth!)

Do you know how much caffeine is in decaf black tea? this is one of the questions our readers ask a lot. Well, we´ve got you covered. Decaffeinated tea may have anywhere between 2 milligrams and...

Do you know if decaf tea has caffeine?  this is one of the questions our readers ask a lot. Well, we´ve got you covered. Decaffeinated means caffeine-free, right? Not necessarily....