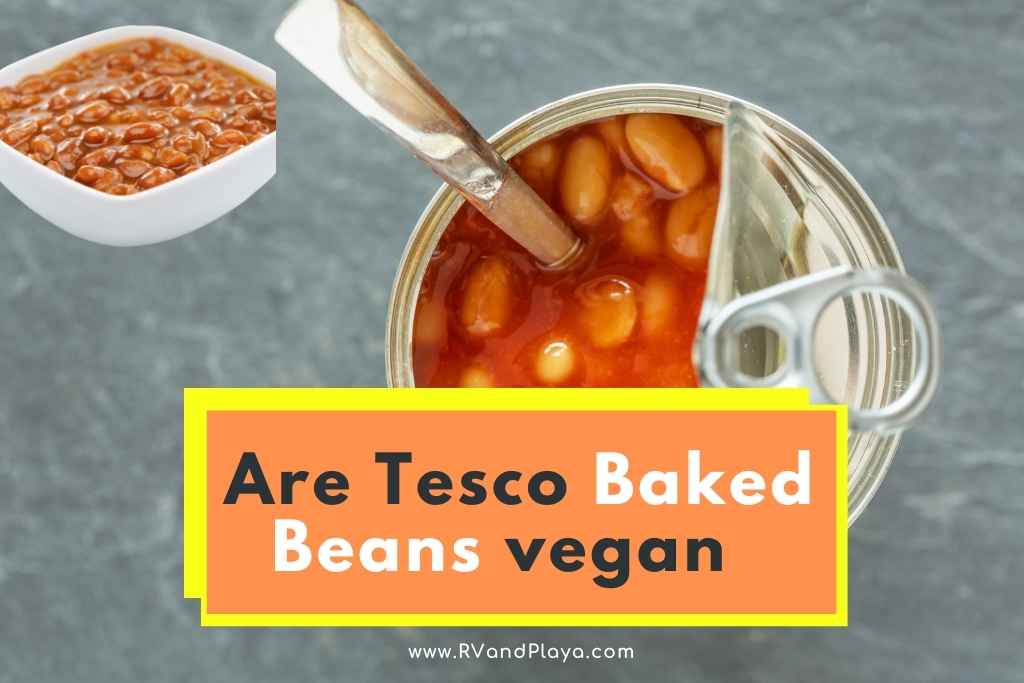 Do you know if Tesco baked beans are vegan, organic or sausages vegetarian? Well, you are at the perfect place to find the answer to such a question.

Tesco has been catering to it’s customers for over 103 years now and this kind of longevity comes with it’s perks. Rather than slapping a ‘vegan’ label on obviously non-vegan products, Tesco actually wants your business and it shows.

So, are Tesco baked beans vegan? Yes, Tesco baked beans are vegan, provided that you purchase one of 5 specific brands which we share with you today. Two examples to get you started include Tesco baked beans in tomato sauce and Tesco Kosher baked beans, but they’re hardly your only choices. All you need to know is honestly listed on their labelling and it’s certainly refreshing.

Today we’ll explore the subject in a little more depth so that you’ll know what baked beans are 100% vegan and we’ll also go into some of the fantastic steps that Tesco has taken to show vegans that they truly love us and appreciate our business.

Let’s get a closer look at Tesco’s vegan-fare and what you need to know!

Are baked beans vegan in the first place?

First off, we have to say it’s frustrating that so many companies seem to miss out on what should be a simple market. At their most basic, baked beans are about as vegan as they get.

You’ve got beans and you’ve got tomato sauce, but some companies just don’t seem to be happy without adding enough preservatives to produce a tin of beans that you could leave to your great-grandchildren.

Tesco, however, certainly has quite a few offerings, but we’re going to start our little ‘Tesco tour’ with one that you need to definitely avoid.

Vegetarian is NOT vegan and most of us really hate having to explain that. So, what’s the scoop on Tesco baked beans and vegetarian sausages?

They certainly look tasty on the label, but sadly, they’re not going to make the cut.

Sadly, they ALMOST made it, with some of the ingredients being quite nice. You’ve got potato starches, soya, maize, pimento, and ginger extract, but sadly without going into an analysis of some of the preservatives that are suspiciously exotically-named, there’s a big, fat red flag waiting right on the label.

Don’t fret, however, as Tesco has you covered if you’d like a nice saucy & bean snack, you just need to purchase the components separately and that’s better anyways, because you can season them to taste.

Just look for Tesco staples such as Quorn vegan sausages and their ‘Garden Gourmet’ line and you can certainly ‘scratch that itch’.

So, which Tesco Baked beans are truly vegan?

A promise is a promise, and now that you’ve committed to this article, we’ve got the goods for you when it comes to ‘truly vegan’ baked bean offerings from Tesco.

Below you’ll find the ‘vegan approved’ brands that you’ve been looking for:

Those 5 brands are the ones that you want to look for and if you don’t believe us, then just check the labels.

That’s an inside joke, of course, because let’s face it… we ALWAYS have to check the labels. It’s rather dreary sometimes, but there you have it.

Still, until the recipes get modified, these brands are currently 100% vegan and safe to snack on or to enhance with some yummy vegan sausages or whatever else you feel like adding from your current cache of favorites!

Tesco appreciates the vegan business and it’s quite a relief, really. While most of us have lost count of the sheer number of times that we’ve seen a tasty ‘vegan’ treat, read the label, and subsequently wanted to lob the can somewhere nasty, Tesco has been quite up-front and honest with their vegan clientele and it’s definitely appreciated.

When it comes to appreciating the beauty of beany-goodness that hasn’t been animal-fat-basted or egg-tainted, you need only to look for the following Tesco goodies the next time that you are shopping for snacks:

That’s really just a start, though. We know that you came here for beans, but we’d be doing you a disservice if we didn’t take a moment to give you a quick peek into the scope that Tesco has sampled to provide vegans with what are frankly some well-deserved meal options. Stay with us and see for yourself.

Tesco has two primary lines that make up the lion’s share of their vegan delights and if you haven’t tried them, you’re in for a treat.

We’re talking about their ‘Plant Chef’ and ‘Wicked Kitchen’ offerings and there’s a lot more to it than the baked beans which we started off with.

Just to give you a ‘taste’ of what is waiting at Tesco right now, here are some samplings from both lines:

In conclusion: Tesco baked beans and more are indeed available

If you’re tired of spending over an hour at the store, only to find that yet again some company thinks that ‘vegetarian’ and ‘vegan’ are the same thing, then Tesco really is a breath of fresh air.

You’ve got 5 baked bean varieties to choose from, and you can add vegan sausages or even vegan steaks if that tickles your fancy thanks to their Plant Chef and Witched Kitchen lines.

It’s nice to know that your business matters and with a little luck, you’ll be able to leave the grocery store in record time, and even better – you won’t have to return there again cross over false advertising and AMEN to that, right?!

Do you know if Pure protein bars are vegan? this is one of the questions our readers ask a lot. Well, we´ve got you covered. Pure Protein bars are delicious, pack a lot of protein, and are fairly...

Do you know if ONE protein bars are vegan? this is one of the questions our readers ask a lot. Well, we´ve got you covered. Looking for healthy, vegan protein bars that will help make you feel...