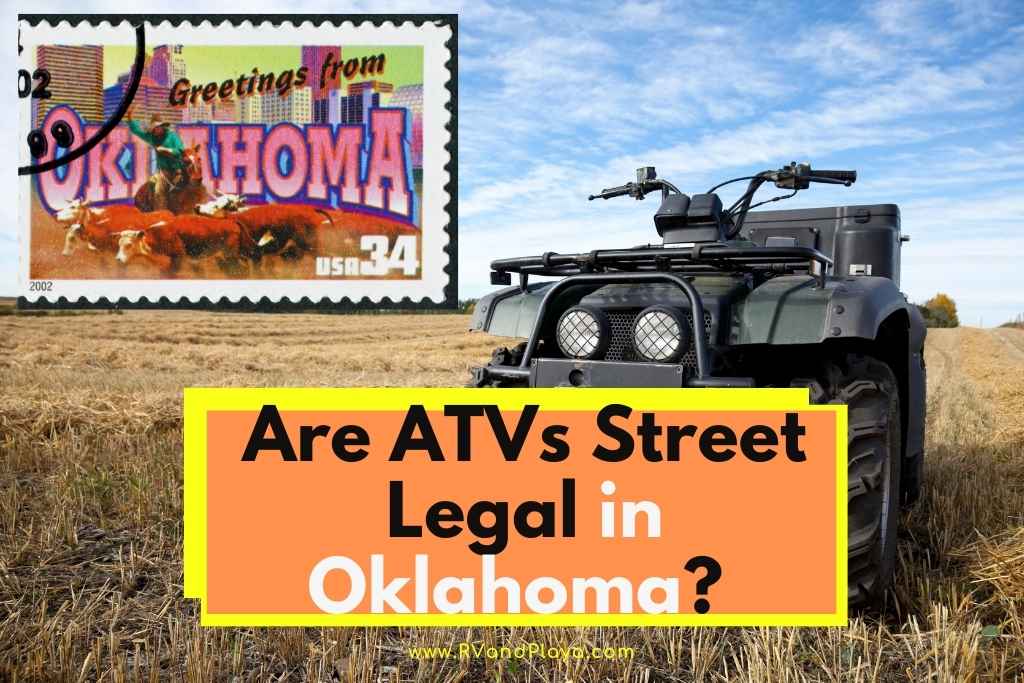 Have you ever wondered if ATVs are street legal in Oklahoma? Well, look no further as we have all the answers to this question. And because this matter is slightly complicated, we also have answers to the question you probably do not know you should be asking.

All-terrain vehicles and other utility vehicles designed primarily to be used off-road are not allowed on public streets and highways in Oklahoma. Except on the roads and streets that local municipalities designate or they are in unincorporated areas.

But, there are some details and finer points of this, that we need to explain. So, let’s get on with it.

Are ATVs Street legal in Oklahoma?

Oklahoma State Statutes practically ban ATVs from all streets and roads. But, it leaves the option for local municipalities to enact an ordinance that makes it legal to ride on streets and roads in their jurisdiction. Such ordinances make it legal to cross state highways within that county or municipality if the posted speed limit is 35mph or less.

Also, traveling 300 feet on a highway is also allowed if the ATV operator needs to cross a railway track. Crossing highways and railway tracks in both of these cases are allowed only during daylight hours.

ATVs are also allowed on all unpaved roads on all properties of the Forest Service of the US Department of Agriculture.

Besides these allowances, riding ATVs is also legal in many state parks, where the Oklahoma Tourism and Recreation Department permits them. On some websites, you will find that all state parks roads are allowed, but that applies only to OTRD employees.

In the unincorporated areas, ATVs are legal only on roads that the county commissioner approves, and the roads and highways are not part of the state or interstate highway system.

For all of these cases, the rider must have a valid driver’s license and the vehicle must be registered.

Can I ride an ATV on public lands in Oklahoma?

In many state parks, there are off-roading trails that are permitted for use by ATVs. There are many different ones when it comes to their length and how challenging they are.

But, the common thing for all of them is that they will take you through some of the most beautiful natural areas of this state.

If you are planning on visiting any of these trails, there are more than 30 of them in the state.

And for many of them, you will have to pay a daily entrance fee that varies from park to park. Mostly it is in the range of $10-$15 per day.

Can I ride an ATV on private lands in Oklahoma?

Riding an ATV on private land is legal in Oklahoma if you have permission from the owner. In case the vehicle is used only for riding on private property, it doesn’t need to be registered, nor does the operator need to have a driver’s license.

If the ATV is used only for agriculture, husbandry, or horticultural work; and has front and back metal racks, it is then classified as a farm implement.

In such a case the owner has some additional benefits, but only if the vehicle is not used for recreational purposes.

Do I have to register or title an ATV in Oklahoma?

All new ATVs, when purchased by a licensed dealer have to be registered and equipped with a decal that has four months expiration period. After this period has expired, these vehicles are legal to be driven only by a person holding a valid salesman’s license, or a person that is contemplating the purchase of that vehicle.

The titling fee is $11, and these documents need to be submitted to any Oklahoma DMV office.

Do I need a driver’s license to operate an ATV in Oklahoma?

Per state regulations, to be able to ride an ATV on public streets, roads, highways, and trails; you must have a driver’s license.

Riders that are younger than 16, and not eligible for a driver’s license are not allowed to operate adult-size vehicles and must be supervised by an adult driver’s license holder when riding an ATV.

But, counties and local municipalities have the right to impose stricter regulations on who can legally ride an ATV.

So, you should inform yourself at an appropriate agency. The best choice is always the local law enforcement.

Are helmets mandatory in Oklahoma?

No, helmets are not required by the state law for ATV operators, unless they are underage. And this requirement only applies to riding ATVs on public roads and lands.

That should be it on the question are ATVs Street legal in Oklahoma. Though they are not allowed on state and interstate highways, counties and municipalities are allowed to designate streets and roads in their jurisdiction.

To ride on these roads, you need a driver’s license, and the vehicle must be registered.

Do you know how to get a title for a camper without a title in Oklahoma? this is one of the questions our readers ask a lot. Well, we´ve got you covered. Taking your RV on the road is a great way...

Continue Reading
link to Can You Get A Duplicate Car Title The Same Day In Oklahoma?

Have you ever wondered if you could get a duplicate car title the same day in Oklahoma? Well, look no more. We´ve got you covered. So, you’ve lost or damaged your Oklahoma car title—now what?...