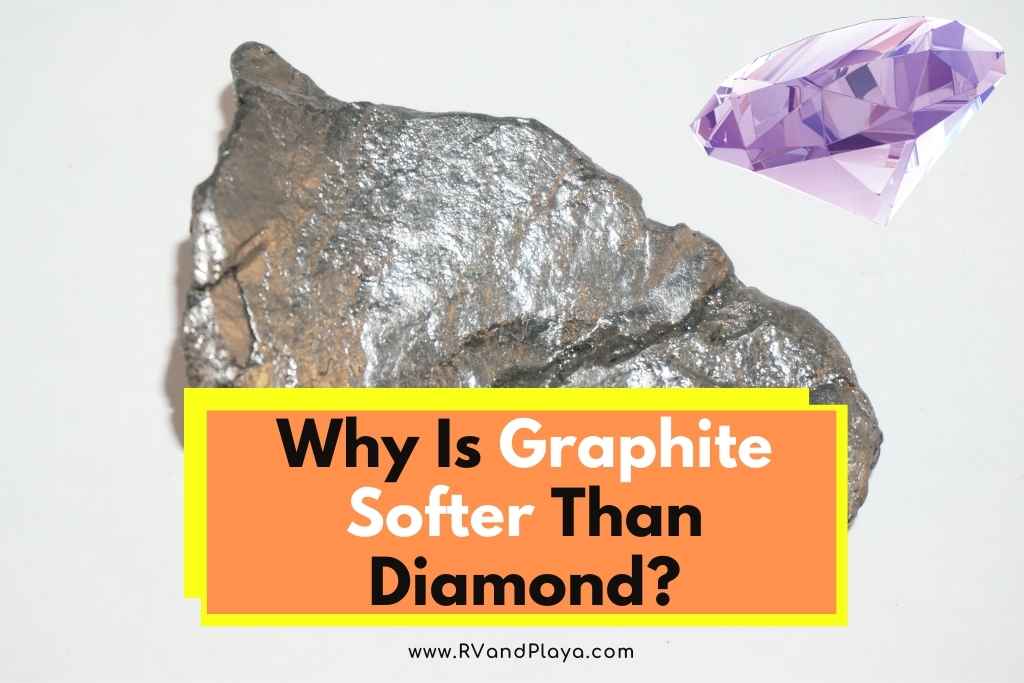 Do you know why graphite is softer than diamond? this is one of the questions our readers ask a lot. Well, we´ve got you covered.

Graphite and diamonds are interesting minerals because they are identical chemically. Despite both being made up of carbon, the minerals have different structures, hardness, and physical appearance.

For example, most people are aware of the fact that graphite is much softer than diamonds.

Why is that? For a complete look at why graphite is softer than diamond, despite their chemical similarities, keep reading.

Why Is Graphite Softer Than Diamond?

Given that both graphite and diamond are made up entirely of carbon, it’s a bit confusing to think that graphite is so much softer and physically different than diamond. As such, you’re probably wondering, “Why is graphite softer than diamond?”

The answer to this question goes back to the differences between the two substances. The molecular structural difference between diamonds and graphite makes graphite notably softer as described below.

Diamonds form whenever carbon atoms bond with four other carbon atoms, creating a tetrahedron. These strong covalent bonds are equally strong in all directions and have a nice symmetric crystal system.

Since the bonds are equally strong no matter which way you look, they do not flake off from any side.

As a result, the stacking interactions break off easily, allowing the different layers of carbon connections to flake off. In other words, graphite can flake off in layers.

The fact that the different layers of carbon bonds move so freely makes graphite soft, especially in comparison to diamonds.

Let’s take a second to compare how diamonds and graphite react to one another because of these structural differences.

If you were to put pressure on a diamond, it would remain strong. Because the carbon bonds are equally strong from every direction, the carbon layers do not slide against one another, and they do not flake off.

The same is not true of graphite. If you were to put pressure on graphite, the stacking interactions would break off, allowing the layers of carbon to separate and break up the mineral in sheet layers.

As such, graphite would break and separate if you used diamond to scratch graphite.

Read also >> Can You Wear Diamonds in the Shower? (All You Need To Know)

If Graphite Is So Much Softer, How Does It Become Diamond?

Thinking about the fact that diamond and graphite are both made up of carbon but still have varying differences is crazy enough.

Thinking about the fact that graphite can be turned into diamond is even crazier. How exactly does this occur?

Firstly, graphite has everything it needs to become diamond. Because both graphite and diamond are made up entirely of carbon, no additional minerals or substances have to be added. Instead, only the structure of the carbon atoms has to be changed.

If you expose graphite to extremely high pressure and high temperature, the carbon structure will begin to change, allowing the material to transition into diamond.

As you might imagine, this pressure and temperature are hard to reach, which means most graphite will never turn into a diamond. Furthermore, these extreme pressures and temperatures must be maintained for an extended amount of time.

The graphite must be subject to this pressure and temperature long enough for the carbon to begin to organize itself differently.

In other words, extreme scenarios must be met. If graphite is exposed to extreme pressure and temperature over an extended amount of time, the carbon atoms are rearranged to create diamond.

Graphite is made up of carbon. It includes stacked layers of carbon atoms, and its carbon is generally considered one of the most stable forms of carbon, assuming that graphite is under standard conditions.

Both synthetic and natural graphite exist and are used commonly.

For example, everyone from school children to adults uses graphite in their pencils. Graphite is a soft material that marks on paper, making it a great alternative to dangerous lead.

It is also used in many electrical parts since graphite is a fantastic conductor of electricity and heat.

In other words, don’t try to convert graphite into a diamond on your own because you will ultimately waste your time.

Diamond is the solid version of carbon. Diamond develops out of graphite and develops slowly. It is made up of a crystal structure named the diamond cubic, allowing diamond to be one of the hardest substances on earth.

Diamond is also frequently used. Obviously, diamond is considered a valuable gem that is frequently used in jewelry. Diamonds are also used in tools due to their hardness. For example, diamond grinding grit is a popular use. In cases where the hardness but not the value of diamond is needed, the diamond is normally made through man-made properties.

Once again, diamond is frequently made from graphite. More specifically, diamond develops whenever carbon deposits are exposed to high temperature and pressure.

These deposits are normally 90 to 125 miles under the surface. This explains why diamond mines are dangerous to access.

To fully understand why graphite is softer than diamond, we have to look at how diamond and graphite compare to one another, including their similarities and differences. Take a look:

Let’s start with the similarities. The similarities between graphite and diamonds are the most shocking to most people given that the differences are obvious just by looking at the materials.

As a side note, buckminsterfullerene is a recently discovered molecule that also is made up entirely of carbon.

The carbon atoms within diamonds get arranged tetrahedrally. As a result, every atom is attached to four others. This tetrahedral structure is strong and creates a 3-dimensional shape. It also creates an infinite network, further explaining the strength of the diamond.

Because of this atom shape, diamond is hard and strong. It can scratch any other material. Similarly, the structure allows diamond to conduct sounds but not electricity. This explains why diamond is often used as an insulator.

The structure of graphite is different. Instead of having a tetrahedral shape, the carbon atoms are arranged in a layered array.

There are two different atom interactions within graphite. In one interaction, every atom is bonded to three others. These structures are at the corner of the other interaction type.

The other interaction type creates a regular hexagon shape. When you put the two shapes together, the bonds are two-dimensional, horizontal, and hexagonal.

This weaker connection is what creates the three-dimensional form of graphite.

This molecular structure of graphite means that it is much softer than diamond. However, graphite can conduct electricity, appear black, and absorb light, which diamond cannot do.

Even though there are many differences between graphite and diamonds, the biggest difference to be aware of for the purpose of this article is their difference in hardness.

Anyone who has felt graphite and diamond knows that graphite is notably softer.

The hardness of gems and materials can be measured. The Mohs scale of hardness is used to rate the hardness of substances in an objective manner.

The scale also gives you an idea of how hard the material is in comparison to others by ranking minerals on a scale of 1 to 10.

Diamond is one of the hardest substances on our planet that we know of. It has a 10 on the scale, which happens to be the highest level of hardness.

Diamond is the only mineral with this ranking. Graphite, in comparison, has a ranking of 1, which is the lowest level of hardness.

Is graphite a strong material?

No. Graphite is not a strong material. On the contrary, it is one of the softest materials with the lowest Mohs rating.

What is the hardness rating of graphite?

The hardness rating of graphite is 1, which is the lowest rating a mineral can get. As such, graphite is one of the softest minerals on the planet.

What is graphite commonly used for?

Despite its softness, graphite is commonly used around the home. It can be found in batteries, brake linings, boundary facings, lubricants, and steelmaking. It is also used in pencils since it can so easily glide across the page without the dangers associated with lead.

Is graphite a metal?

Graphite is not a metal. Instead, it is a mineral. Interestingly, graphite is the only nonmetal material with the ability to conduct electricity.

Is graphite a man made material?

No. Graphite is not a man-made material since it can be found in nature. However, we have created synthetic graphite that is more resistant to high temperatures.

To recap, graphite and diamond both have the same chemical structure – they’re made up entirely of carbon.

Despite this similarity, the carbon atoms rearrange themselves differently, which explains why diamond and graphite have such different hardness ratings.

Who knew that the structure of the atoms could make such a big difference!

link to Can You Wear Diamonds in the Shower? (All You Need To Know)

Whenever you wear diamonds daily, it can feel like a hassle to remove the jewelry before every shower and put them back on after. For this reason, many people wear their diamonds and luxury jewelry...