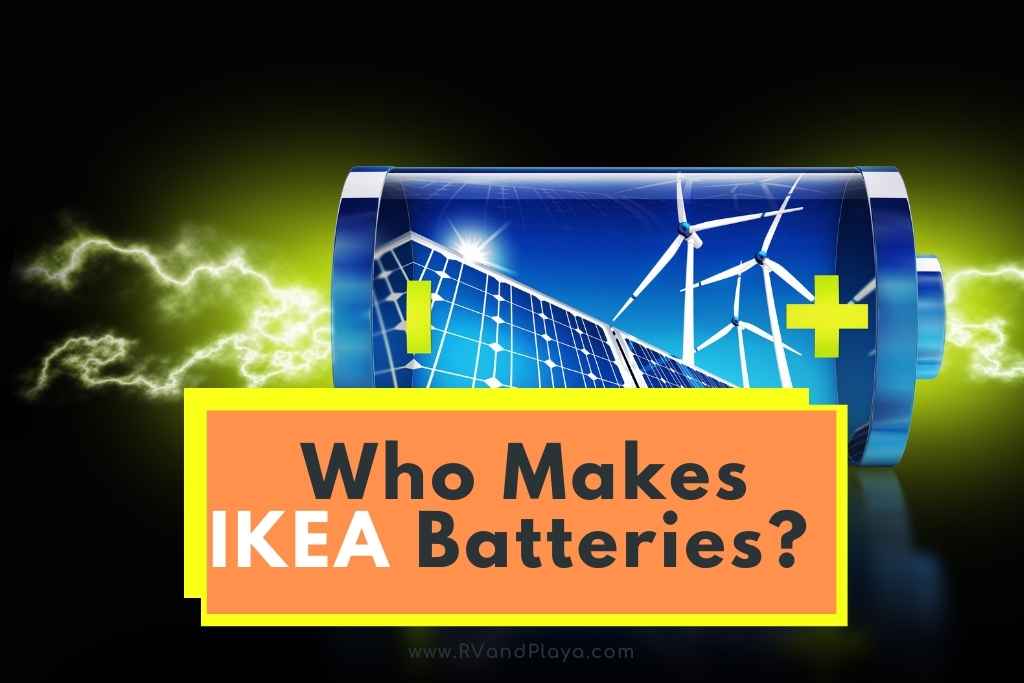 Do you know who makes IKEA batteries? Well, you are at the perfect place to find the answer to such a question.

Ikea sells a wide variety of fantastic products, one of which is their batteries. Ikea sells rechargeable LADDA batteries, for a fairly low price! If you’ve purchased these recently you might be curious about who manufactures these batteries.

While there aren’t any concrete answers provided by Ikea about who manufactures their LADDA batteries, there is speculation that Fujitsu Global makes these batteries, along with a few other famous battery brands.

In this article, we will provide some important information about Ikea batteries, explain how their manufacturing has been linked to Fujitsu Global, and present the batteries they are comparable to.

What Type Of Batteries Does Ikea Sell?

Ikea sells a couple of different batteries, however, the ones we are concerned with in this article are the LADDA rechargeable batteries.

The batteries are made from steel, PET, and plastic, and are not alkaline batteries. They are fully rechargeable batteries that can be used up to 500 times, making them a more environmentally conscious choice.

LADDA batteries are marketed as “pre-charged” and “ready-to-use.” This is another way of stating that they are low self-discharge batteries.

The LADDA batteries are sold for $6.49-$8.99, which makes them a great deal when compared to other rechargeable batteries.

These batteries can be used for a variety of different things, such as flashlights and remote controls. However, they are a popular choice among many for use in flash cameras.

Read also >> Can I Return An Item To IKEA Without a Receipt? (Secrets Nobody Is Talking About)

Where Are Ikea Batteries Made?

Ikea LADDA batteries, and many other types of rechargeable batteries, are made in Japan. Japan is home to the corporation Fujitsu Global, which is a technology company.

Fujitsu also owns FDK Corporation, which is a battery manufacturing company based out of Japan as well.

So, how are Fukistu, and therefore FDK Corporation, linked to Ikea batteries?

What Other Rechargeable Batteries Are Made In Japan?

Both types are a popular choice for flash cameras, made from the same materials, and both are produced in Japan.

The LADDA batteries are defined as low self-discharge and made from a nickel-metal hybrid material, otherwise referred to as “LSD Ni-MH” batteries. This is the same type of battery as the Eneloop battery.

Both batteries are fairly similar when tested using a battery tester. They have similar discharge and recharge levels, and some testers have discovered only a 0.05% difference between the two brands.

While this may seem like a coincidence, it seems more likely that they are produced in the same factory owned in Japan.

How Are Eneloop Batteries Connected To Ikea LADDA Batteries?

Originally, Eneloop was owned by Sanyo, and was later purchased by Panasonic in 2009. Panasonic stills own Eneloop, however, the factory the batteries are produced is owned by FDK Corporation and located in Japan.

Considering the fact that FDK Corporation is a subsidiary of Fujitsu, they also own the FDK factory.  And, it just so happens that the FDK factory is the only one in Japan that has the capabilities to produce these types of batteries.

FDK is the only company known to have the capabilities to make LSD Ni-MH batteries, and they are an original equipment manufacturer for Ikea, Panasonic, and Amazon.

What Is An Original Equipment Manufacturer?

Essentially, an OEM is a company that manufacturers certain goods, in this case, batteries, that are used as a component within another product. The new product is finished by another company which then proceeds to sell the product under their name, not the OEM’s name.

So, as this applies to our batteries, FDK Corporation is the OEM manufacturer that makes the inside of the rechargeable batteries.

They are then likely sold as blanks to the various brands (Ikea, Amazon, Panasonic), finished off, and sold under the new brand name!

Are Ikea LADDA Batteries The Same Quality As Eneloop?

Given that Ikea LADDA batteries are sold for a considerably lower price than both Eneloop and Amazon brand rechargeable batteries, they are a great deal! Although there may be minor differences between the brands, all of the information we’ve presented points to the fact that they are likely the same battery.

Ikea is just able to keep their costs a little lower due to the fact that they own all of their retail locations, don’t have to spend much money advertising their products, and they already have a built-in distribution chain.

So, although the Ikea LADDA is cheaper, it is still the same quality as the other rechargeable battery brands.

Considering the fact that the Ikea LADDA batteries have striking similarities to the Panasonic Eneloop batteries, both are produced in Japan, and they likely come from the same factory, we can conclude that there is a high possibility Ikea batteries are made by Fujitsu.

FDK Corporation owns the only factory in Japan that is known to produce low self-discharge, rechargeable batteries.

Since FDK is owned by Fujitsu, this means that Fujitsu would be considered the overall owner of the factory, and therefore the manufacturer of the LADDO batteries.

Since FDK is also a known original equipment manufacturer for Ikea, Amazon, and Panasonic, this makes it even more likely that they are supplying the companies with the inside component of the battery, leaving the independent companies with the task of wrapping it in their labels and selling it.

link to How Long It Will Take To Charge 12v Battery With Solar Panel? (Explained)

Have you ever wondered how long it will take to charge 12v battery with solar panel? Look no more. We´ve got you covered. Most RVs nowadays are powered by 12V batteries. These batteries are then...

When you left your house, you anticipated having an exciting weekend of adventures and camping. Having your travel trailer’s battery die wasn’t exactly the kind of exhilarating experience you...