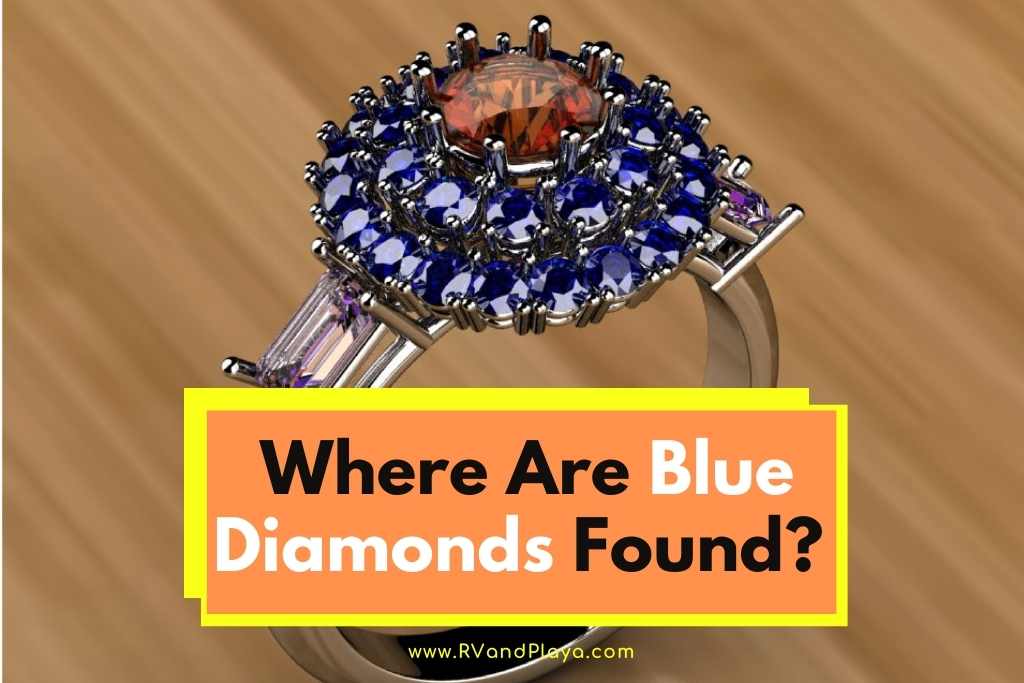 Among the various unique and beautiful alternative colors that can be seen in diamonds, blues are some of the most spectacular, but where do they actually come from and where are blue diamonds found?

Blue diamonds are found in a few countries like:

In this article, you will discover all about these particular precious stones and their origins, as well as how much their rarity and splendor add to their value.

What Are Blue Diamonds?

Before we get into where they can be found and their origins, we should first explore what they actually are.

Though they are often confused for other blue gemstones, like sapphire or aquamarine, blue diamonds are actually a color variation of true diamonds. They are formed in exactly the same way, except for a minor addition that gives them their blue coloring.

These diamonds are part of a special sub-group of diamonds known as “fancy color diamonds”. This term is used to describe any of these precious stones that have a distinct color to them, and they actually come in many colors besides blue and white.

Read also >> What Is A Blue Diamond Called? (All You Need To Know)

Where Are Blue Diamonds Usually Found?

Just like any of the other varieties of diamonds, naturally-occurring blue diamonds are dug out of the earth, usually in dedicated mines.

They are very rare, however, with less than 0.02% of all mined diamonds actually exhibiting any degree of a blue hue.

There are a few different locations around the world where diamonds have been found, but the most notable mines are the Kollur Mine in India, where the first ever blue diamond was discovered (The Hope Diamond), the Cullinan Mine in South Africa, and the Argyle Mine in Australia.

Unlike many other fancy color diamonds, there are not very many countries where blue diamonds have actually been found. The list includes:

How Do You Know That A Blue Diamond Is Genuine?

It is a very special occurrence to find blue diamonds, particularly those that have been naturally mined from the earth, so you definitely want to know that what you are paying for is a genuine article.

There are a number of ways to determine the difference between real and fake diamonds, but the most reliable is to ensure that you look at an official grading certificate from an external laboratory, like the GIA or the AGS.

What Causes Diamonds To Be Blue?

Each of the different colors that can be present inside diamonds is caused by a unique and particular phenomenon.

These will either be internal elements that affect the formation of the stone itself or external influences that change the way it develops or alters the composition of the stone over time.

For blue diamonds, the color appears due to the presence of very minute amounts of the chemical element boron.

Depending on how much boron is within the diamond, they can range from a very pale light blue color to quite rich and vivid blues that can actually be quite intense.

Where Are Blue Diamonds Formed?

It is believed that the boron that gives these diamonds their color actually originates from below the ocean floor, and the diamonds themselves are formed in the lower part of the Earth’s mantle.

Geologist Evan Smith and a team of scientists working alongside the Gemological Institute of America traced the elements from around 50 different blue diamonds and found that the boron contained within them came from around 400 miles beneath the ocean floor.

This boron would have originally come from the ocean itself, where it would have been absorbed into the seafloor.

Then, that layer would become more dense than the mantle underneath it, and slowly sunk down over many thousands of millennia.

In some ways, blue diamonds are like a time capsule from a place that humans are yet to see. At some point, they would have been situated more than 300 miles deeper than we have ever been able to drill.

Can Blue Diamonds Be Made In A Lab?

Of course, it is possible for blue diamonds to be made rather than found. Discovering one of these enchanting stones in the natural world is an incredibly rare and difficult feat, particularly one with a distinct and vivid hue.

Lab-created blue diamonds are more common nowadays, and more affordable too. The two main processes by which lab-grown diamonds are formed are HPHT and CVD.

Chemical Vapor Deposition, on the other hand, places a sliver of chemicals into a reactor chamber with a mix of gases so that carbon slowly layers onto the outside.

By altering this process, diamonds can be created in a variety of different colors, or they can be treated after they have been formed to give them the desired hue.

Lab-grown diamonds are actually almost identical in every meaningful way to those that are mined from the earth, as they share the same physical, optical, and thermal properties. Even an expert cannot tell them apart.

How Much Are Blue Diamonds Worth?

To understand a little more about how much these rare stones are worth, we can explore how much they are actually worth to buy.

Pricing diamonds is a pretty complicated business that is influenced by a number of different factors, the most significant of which are the origin and the Four Cs. The Four Cs refer to the color, the cut, the clarity, and the carat.

Blue diamonds, it is the color that has the most significant impact on how much there are worth. Even smaller richly colored blue stones can be worth significantly more than you might expect.

If you compare this to the price that you would pay for a colorless diamond, you can see that they are noticeably more valuable.

Colorless diamonds rarely sell for more than $8,000-10,000 for one carat, even when they are graded as being of the highest quality.

Where Have Famous Blue Diamonds Come From?

There are a number of blue diamonds that have quite a reputation around the world. In fact, some of the most well-known gemstones in history are blue diamonds.

Most of these originated from India, but some have been found in other places around the world too.

A few of the most notable examples of blue diamonds include:

So, where are blue diamonds found? Naturally-occurring blue diamonds are a color variation of genuine diamonds that happens when trace elements of boron are contained within the structure.

They have been found in several mines, notably in India, South Africa, Australia, Indonesia, and Botswana.

The boron present in these stones is believed to originate from deep below the floor of the ocean, meaning they actually form in the lower part of the Earth’s mantle.

Not all blue diamonds are natural, though, and many are actually grown in a lab.

Do you know what is the price of irradiated blue diamonds or what is their value compared to other diamonds? Well, you are at the perfect place to find the answer to such a question. Irradiated...