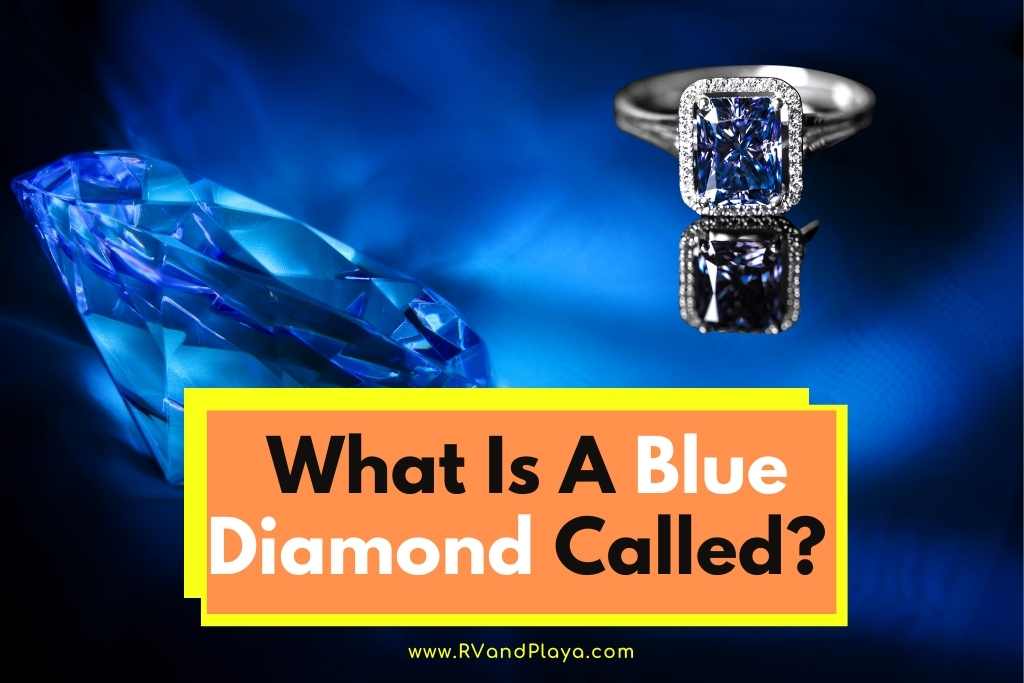 Most everyone has heard of the Hope Diamond–possibly the most famous of the rare colored diamonds. But did you know that there are others of these incredibly rare blue diamonds?

Blue diamonds are Type 11b diamonds, which are some of the most rare at around 0.1% of natural diamonds. Type 11b diamonds contain trace amounts of Boron, which may make the stone appear blue or colorless. Since they are formed deep below the surface of the earth, they are known as “superdeep” diamonds.

Natural fancy-colored diamonds are extremely rare (and expensive!) and also seem to captivate the imagination of the world with their stories.

Remember the necklace in Titanic? That was based on the blue Hope Diamond. Read on for everything you need to know about blue diamond names and diamond types.

What Makes a Diamond Blue?

Many diamonds contain tiny amounts of chemicals, which alter the appearance of the stone. Blue diamonds typically contain the element Boron, and small amounts of nitrogen.

Boron is a chemical that absorbs red, orange, and yellow light. Since it absorbs those frequencies, but not the blue light, the stone will in fact appear blue to our eyes.

The higher the concentration of Boron, the more intense the blue color.

Read also >> Do Blue Diamonds Exist? (All You Need to Know)

Where Are Blue Diamonds From?

In order for diamonds to be exposed to Boron, they have to come from much further below the earth than other diamonds.

Blue diamonds originate from depths more than 400 miles below the surface of the earth. This is around four times deeper than most of the diamonds mined today. For this reason, they are known as “superdeep” diamonds.

It’s possible the Boron found in blue diamonds came from ancient sea floors that were eventually transported deep into the earth’s interior due to tectonic forces.

Is a Blue Diamond a Real Diamond?

Yes. Blue diamonds have the same carbon structure as the white or colorless diamonds we are familiar with, though there are traces of other elements in a blue diamond, most commonly Boron.

Many blue diamonds are real and authentic–the color is natural and not the product of treatment or coating.

However, there are instances where a real colorless diamond is treated to make it look blue, though this is not considered to be a real natural blue diamond, and the price should reflect this.

If you are in the market for a blue diamond, make sure you can authenticate that it is a natural stone and not a treated stone. The certificate will indicate this. It will also be cheaper than a natural blue diamond.

A treated diamond will require special care to maintain its color. Make sure you know if your diamond is treated and what care it requires before you buy.

Keep in mind that some blue diamonds are also lab-grown. These are real diamonds, though they are not naturally occurring and not as rare as natural blue diamonds.

They are not treated stones and will not require special care.

Is a Blue Diamond a Sapphire?

No, diamonds are chemically and structurally different from sapphires, though both are very hard gems (sapphires are second to diamonds on the hardness scale). Sapphires and diamonds both come in a variety of colors.

Sapphires are most commonly known for their blue color, though they come in a wide range of colors, including pink, yellow, orange, green, and purple. Blue sapphires get their blue color from the element Titanium.

You may not know this, but rubies are actually red sapphires.

Natural blue diamonds are among the most rare colors of diamonds, making up less than 0.02% of mined diamonds.

This is in part due to the fact that they are formed so far below the surface of the earth, and that they contain the chemical Boron, which is a fairly rare element.

Only a few mines across the world produce blue diamonds, and those mines may only produce one or two blue stones in a given year (if any at all).

Lab-created blue diamonds are a different story. Nowadays it is possible to grow blue diamonds in a lab by introducing Boron during the growth process.

Blue lab diamonds are more rare and more uncommon than white lab diamonds, though they are not rare compared to natural blue diamonds.

What are the Most Famous Blue Diamonds?

Probably the most famous blue diamond, this beauty weighs in at 45.52 carats and is a deep blue. It is now housed at the Smithsonian Museum in Washington, D.C., and may be worth as much as $250 million. Legend has it that throughout history misfortune has visited the owner of the diamond.

Originally mined in Zaire at a raw weight of 777 carats, this stone was at one time considered the 6th largest in the world.

After cutting, the pear-shaped stone now weighs in at 203.04 carats and is internally and externally flawless.

The Heart of Eternity

Weighing in at 27.64 carats and a fancy vivid blue color, this gem would be worth around $80 million today.

The largest heart-shaped diamond in the world at 30.62 carats, this stone is a fancy deep blue. Scientists have determined that it was mined in South Africa, though for many years its origins were unknown.

It is now part of the U.S. National Gem Collection along with the Hope Diamond.

The 12.03 carat Blue Star went for $48 million at auction in 2015–that’s $4 million per carat if you are doing the math. This ranks it as one of the most expensive diamonds per carat ever sold.

This stone was also mined in South Africa, and is considered not only flawless, but also the highest color grade of blue diamonds.

Another internally flawless beauty, this 31.06 carat stunner was mined in India, which is one of the largest producers of fancy colored diamonds in the world.

It sat in the crown of the king of Bavaria until 1918. The stone’s estimated value is around $80 million.

The Sultan of Morocco

The history of this stone is a mystery, though experts believe it may have been mined in India. It is a 35.27 carat Fancy grayish-blue color, cushion cut.

A 14.62-carat emerald cut, this diamond was the largest blue diamond to be sold at auction and went for $57 million in 2016.

What is the Rarest Diamond Color?

While blue diamonds such as these rank among the rarest diamonds ever found, red diamonds are considered to be the rarest color of the diamond.

How Much is a Blue Diamond Worth?

Natural blue diamonds are excessively rare, and their price tags show it. Many of the largest and most vividly colored blue diamonds have set records at auction. It isn’t unusual for these stones to go for multiple million dollars per carat.

Just like other diamonds, blue diamonds are graded on the 4Cs scale (cut, color, clarity, and carat). The color scale for blue diamonds varies from Faint Blue all the way through Fancy Vivid Blue.

The deeper the blue hue, the higher the cost. Blue diamonds with a very faint blue hue will be cheaper than the vivid ones, though still significantly more than a colorless diamond or some other fancy colors.

Of course, this is in the eye of the beholder. You may like the colors of less vivid stones or varied-color stones more than the pure blues.

Is a Lab-Created Blue Diamond a Real Diamond?

Lab-created diamonds look just like real diamonds and have the same chemical structure and properties as natural diamonds.

Lab-grown blue diamonds are graded just like natural blue diamonds, and typically sell for less than $5,000 per carat.

Blue diamonds refract light just like colorless diamonds, so they exhibit the same characteristics of sparkle and fire as colorless stones.

You can tell a blue diamond from a sapphire by its increased sparkle.

Blue diamonds go by many names–superdeep diamonds for their incredibly rare provenance, 11b for their rare form.

The world (and the auction market) is captivated by these rare beauties, and the prices show it.

But if you are in love with the blue stones and don’t need something rare, a lab-grown blue diamond can be had for a fraction of the price of a natural stone.

Do you know what is the price of irradiated blue diamonds or what is their value compared to other diamonds? Well, you are at the perfect place to find the answer to such a question. Irradiated...

Continue Reading
link to Do Blue Diamonds Exist? (All You Need to Know)

If you are looking for a rare gem to purchase for that special someone, you may have done your research to find that diamonds come in all different colors, not just colorless. Does that mean you can...