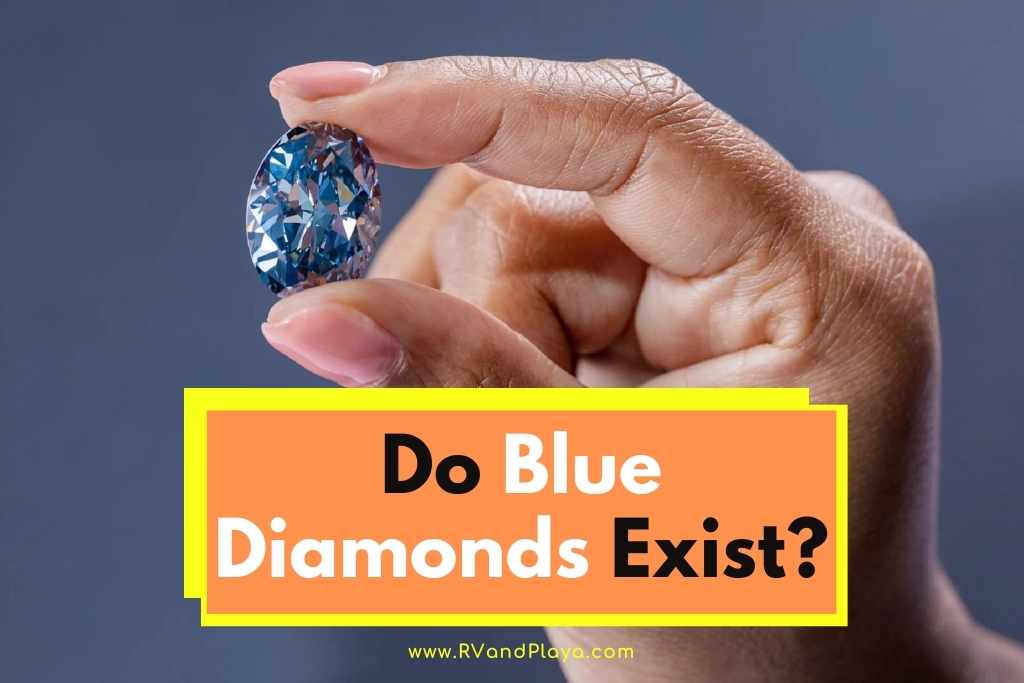 If you are looking for a rare gem to purchase for that special someone, you may have done your research to find that diamonds come in all different colors, not just colorless. Does that mean you can buy a blue diamond?

Blue diamonds do exist and be manufactured artificially or mined naturally. Many jewelers sell blue diamonds with natural stones being more expensive than manmade ones.

In this article, we will review how blue diamonds are made, how many exist, where they are mined, and when they were first discovered.

How Are Blue Diamonds Made?

Blue diamonds can occur naturally or be colored artificially by man. Naturally occurring blue diamonds are given their color due to the concentration of the element boron within the stone.

The higher the concentration, the brighter the blue color that appears. Some blue diamonds with a lower concentration of boron may appear gray, violet, or faded blue.

Natural blue diamonds are thought to be made lower in the Earth’s crust than other diamonds, making them harder to find and more valuable because of their rarity. Blue diamonds aren’t all naturally occurring, however. There are manmade blue diamonds.

Colorless diamonds that have been subjected to high concentrations of heat can turn a deep blue color.

Synthetic blue diamonds are typically made in a lab and aim to mimic the brilliance of the naturally occurring blue diamonds that are dug up from deep in the earth’s crust.

Artificial blue diamonds are not as valuable as naturally occurring blue diamonds and tend to display a different shade of blue. Another way to tell the difference between a natural blue diamond and a manmade one is how they act in regard to electricity.

Read also >> Do Black Diamonds Exist? (All You Need to Know)

Read also >> Are Red Diamonds Real? (All You Need To Know)

How Many Blue Diamonds Exist?

Only one in ten thousand diamonds display the presence of color; even fewer than these are blue. It is thought that the percentage of legitimate blue diamonds in existence today is less than 0.02% of the total number of diamonds in the world.

Because of their rarity, blue diamonds are considerably expensive. Some of the most notable blue diamonds in the world are valued at millions of dollars each.

The higher the boron concentration, the deeper the color, and the rarer the find.

Synthetic blue diamonds are still prized for their beautiful colors but are much more commonly found. Blue diamonds created in a laboratory are far more abundant and easier to obtain than naturally occurring diamonds.

If you purchase a blue diamond, ask the gemologist about its authenticity. If you didn’t pay at least a couple of thousand dollars for it, it is most likely artificial.

Where Can You Find Blue Diamonds?

While synthetic blue diamonds can be created in any gemologist’s lab, naturally occurring blue diamonds are only found in a handful of mining sites throughout the world.

Mines in modern day Andhra Pradesh and Telangana have produced some of the most iconic blue diamonds known to mankind such as the Hope Diamond and the Wittelsbach-Graff Diamond.

South Africa’s Cullinan Diamond Mine is one of the most well known places to unearth blue diamonds.

The majority of blue diamonds come from this mine including the largest uncut blue diamond to date which weighed over 100 carats.

The Argyle Mine in Australia and Aredor Mine in Guinea have also collected various blue diamonds of different shapes and sizes including some famous finds like the Graff Imperial Blue Diamond.

When Were Blue Diamonds First Discovered?

One of the oldest recorded discoveries of blue diamonds dates back to the 1400s when the Idol’s Eye blue diamond was found in an Indian mine.

The 17th century, however, saw the first notable blue diamond discovery with the unearthing of the famous Hope Diamond, a forty-five carat gem found by a French miner in India.

Since then, blue diamonds have been valued for their stunning color and still continue to be unearthed today. While blue diamonds are a rare find, large rough cut specimens are still being discovered, indicating that there may be much more of the earth’s crust that is harboring these gemstones.

Since the first discovery of the blue diamond, mankind has been captivated by the brilliant blue color produced by the natural combination of boron and carbon under the intense pressure of the earth’s tectonic plates.

How Much Are Blue Diamonds Worth?

Because blue diamonds are a rare occurrence in nature, they are worth a lot of money. The higher the boron concentration, the richer the blue color – and diamonds rich in color are often way more valuable.

Those with tints of purple or gray or that are faded are not quite as valuable.

The average cost of an artificial blue diamond is between $7,000 and $11,000 per carat of weight. The smallest cut blue diamonds are still extremely expensive with a third of a carat costing around $2000 to $3000 dollars.

If you are looking to purchase a real blue diamond, you could be spending upwards for $25k to $75k for a quarter to a half of a carat.

Some of the most iconic blue diamonds in the world have sold for tens of millions of dollars including that Oppenheimer Blue which was priced at over $57 million dollars when last sold at auction.

The Hope Diamond, the most expensive jewel in the world, is valued at $250 million.

Is the Blue Diamond the Rarest Color?

While blue diamonds are indeed extremely rare with less than a fraction of a percent of the world’s total diamonds colored blue, they are not the rarest colored diamond in existence.

Red diamonds are even rarer than blue diamonds and only number about twenty or thirty in the entire world.

Most of the red diamonds in existence have been mined from the Argyle Mine in Australia which has also been known to produce blue diamonds.

Next to red though, blue diamonds are the second rarest diamond color found in the world followed by pink.

Some believe that pink diamonds are rarer than blue; however, there are more pink diamonds available on the market, suggesting that blue is indeed harder to find than pink.

What Do Blue Diamonds Symbolize?

All gemstones have significant meanings among collectors and within various cultures. Blue diamonds are meant to represent symbols of truth, devotion, and peace. Some believe that a blue diamond can also symbolize chastity, eternity, or spirituality.

The Hope Diamond is said to be cursed and represents the sin of greed since it was allegedly stolen from an Indian idol centuries ago.

Blue diamonds have different meanings for different people, but no one can deny the attainable beauty of a natural blue diamond.

Whether you believe it is a representation of a hopeful future or the power of the spirit, blue diamonds make an impactful and valuable gift.

What Is the Most Famous Blue Diamond?

The most famous blue diamond ever discovered is the Hope Diamond. A French miner named Jean Baptiste Tavernier unearthed the gem in Golconda, India in the mid-1600s. The 45 carat jewel has been owned by royalty and wealthy people alike.

Today the famous gem is worth a cool $250 million.

Its brilliant blue violet color inspired the jewel known as the Heart of the Ocean in the 1997 Titanic film. There is so much boron within the Hope Diamond that it glows red after prolonged exposure to ultraviolet light.

The Hope Diamond is also the center of controversy. It is rumored that the jewel is cursed since many of the people who have owned or come into contact with it have died unfortunate deaths.

Legend has it that a curse was placed on it by the Indian gods and Tavernier stole the sacred jewel from them.

Despite its notoriety, it still takes the place of the most sought after jewel in the world. Other famous blue diamonds include the Oppenheimer Blue, DeBeer’s Millennium Blue Diamond, Idol’s Eye, and the Blue Moon of Josephine.

Blue diamonds may sound like the stuff of fairy tales, but they are very real. While they can be created synthetically in a laboratory, they are also naturally occurring.

The presence of boron gives blue diamonds their color and they can be found in mines in Australia, South Africa, and India.

The richer the color, the more blue diamonds are worth with some like the Hope Diamond valued at millions of dollars.

While they are not the most rare color diamond, they are still difficult to find making them extremely prized among gem collectors and enthusiasts around the world.

link to Do Black Diamonds Exist? (All You Need to Know)

Black diamonds are an attractive and unique piece of jewelry that is growing in popularity more and more each year. However, many fans still question their authenticity, asking, do black diamonds...