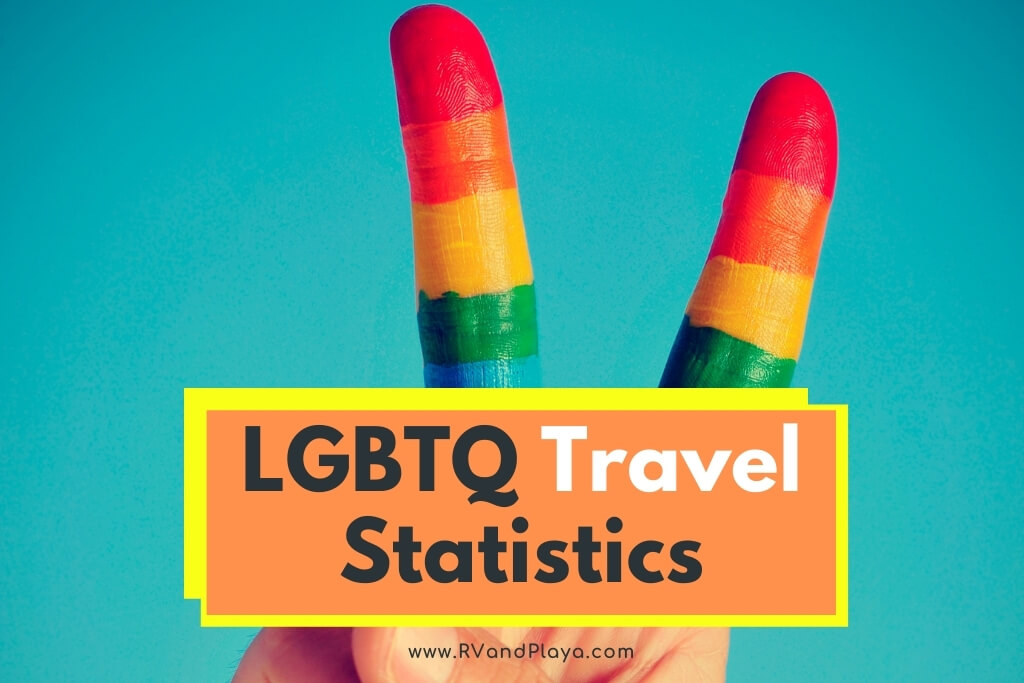 Are you looking for LGBTQ travel statistics or facts and trends?

So, what are the most common LGBTQ travel statistics? In the list below you can find the key facts and statistics about LGBTQ:

In this article, we are going to look at all the facts you need to know about LGBTQ statistics. Most of our statistics are taken from the Annual LGBTQ Tourism and Hospitality survey put out by CMI, but we also look at other reports and stats too.

How Many People are Lesbian, Gay, Bisexual, and Transgender?

So, how Many People are Lesbian, Gay, Bisexual, and Transgender? Based on sexual orientation and gender identity surveys, we can say that about 3.5% of adults in the U.S. identify as LGB. Approx. 1.8% of adults identify as bisexual, 3.4% of women identify as lesbian or bisexual and around 0.3% identify as transgender.

👉 Of these respondents, the biggest age group to respond were between the ages of 30 to 34, who accounted for about 12% of responses.

👉 The last 7% preferred not to answer.

👉 The last factor related to demographics was relationship status. The biggest portion of respondents was married, attributing to 34%.

👉 3% were engaged, and the remaining 2% were in a civil union or domestic partnership.

When looking at travel in general, there are typically three main questions that come up: how much you pay when you travel, if you travel internationally or domestically, and what your favorite destinations are.

These three questions apply to LGBTQ travelers as well.

When looking at prices, the vast majority of LGBTQ participants classify as being a moderate price traveler with a little bit of luxury thrown in.

👉 About 32% of LGBTQ travelers fall under this category.

👉 Only 4% of LGBTQ travelers consider themselves luxury travelers.

As a whole, American LGBTQ travelers tend to be more active on the international scene than other Americans.

👉 In fact, 77% of the participants have a valid passport. To put that in perspective, only 36% of the US general population can say the same.

👉 Among the 77% who have an active passport, 53% used that passport to travel to another country within the last year.

For those who traveled internationally, safety as a foreigner and anti-LGBTQ laws were tied at 66% as being the biggest concern for international travel.

Gay men, lesbian women, and bisexual individuals all viewed Canada as the number one international destination for leisurely trips. After that, Mexico was ranked second among all participants as well (source: lesbian travel statistics).

👉 On average, LGBTQ participants had 3.2 vacation trips and 1.4 business trips within a 12 month period. These participants also took around 2.3 trips to visit their friends and families within the same 12-month span.

👉 In terms of leisure trips and vacations, 19% took two a year. Shockingly, 18% of respondents took six or more trips a year.

👉 On the other end of the spectrum, 13% of LGBTQ respondents did not go on any leisurely trips over a 12 month period.

👉 In terms of vacations for the purpose of visiting friends or family, 24% took one trip.

👉 The second most common number of trips for visiting friends or family was zero, which attributed to 22% of the respondents.

👉 The last reason for travel is business. The majority of LGBTQ respondents did not travel at all for business purposes. 56% of respondents fell under this category.

👉 16%, in contrast, took one trip related to business within the last 12 months.

Romance is a key reason why many people travel, LGBTQ or otherwise. About 12% of LGBTQ respondents took vacations related to marriage and honeymoon in one year alone.

In this study, it was found that the number one honeymoon vacation was in Europe. After that, Hawaii, California, the Caribbean, and other beach locations were listed.

Most LGBTQ travelers who happen to be married have been married for more than two years.

👉 In fact, 73% of the married respondents said that they have been married for more than two years but still travel together.

👉 Still, not all couples are married. 78% of partnered LGBTQ participants have actually been with their partner or spouse for over 5 years.

Many of these couples list their number one reason for taking a romantic trip was to just have fun with their partner.

👉 Only 3% of Millennial couples have been together for less than one year when traveling together.

The same trend correlates with both Generation X and Boomers as well. Interestingly, even fewer percent of respondents from older generations who had been partnered for shorter periods of time traveled together.

This might be because those of older generations tend to be partners more long-term than the younger generations.

In addition to romance trips, family travel is another highly important tourist industry for both LGBTQ and non-LGBTQ individuals. Generation X and Millennial women are the two groups most likely to have children living in their households.

It is these respondents who most likely classify as traveling with a family.

Gay and bisexual men had very low numbers of children under the age of 18 living with them.

👉 In fact, only 8% of gay and bisexual men respondents fall under this category, and this includes Millennials, Generation X, and Boomers.

👉 In comparison, 13% of Millennial, 32% of Generation X, and 6% of Boomer lesbian and bisexual women have a child under the age of 18 living in their house.

👉 Around 85% of LGBTQ parents who had children under the age of 18 took one trip with their family over the past year.

Urban and beach vacations were the most popular types of vacations, but many also took their children to theme park resorts.

👉 On average, LGBTQ parents took 2.2 trips with their children within a 12 month period. A whopping 13% took five or more trips, whereas 15% took 0.

👉 As far as overnight vacations with children go, 55% of LGBTQ parents took their children to some sort of urban or city vacation.

👉 There are many LGBTQ multi-generational families as well. About 14% of LGBTQ Baby Boomers have grandchildren, and 29% of those individuals took their grandchildren on a vacation within the past year.

LGBTQ travel has become more and more popular over the decades. Today, LGBTQ individuals from all ages and backgrounds are enjoying traveling, both internationally and domestically.

It even seems that the LGBT community seems to lead the way in terms of international trips in the US.

Looking for travel statistics or trends? Traveling has long been a popular pastime among all groups and demographics around the world. Whether it is taking a relaxing vacation at the beach or...

Looking for travel statistics by age group? Traveling is something that just about everyone, regardless of their age, loves to do. Despite the common attraction of traveling, the statistics show...