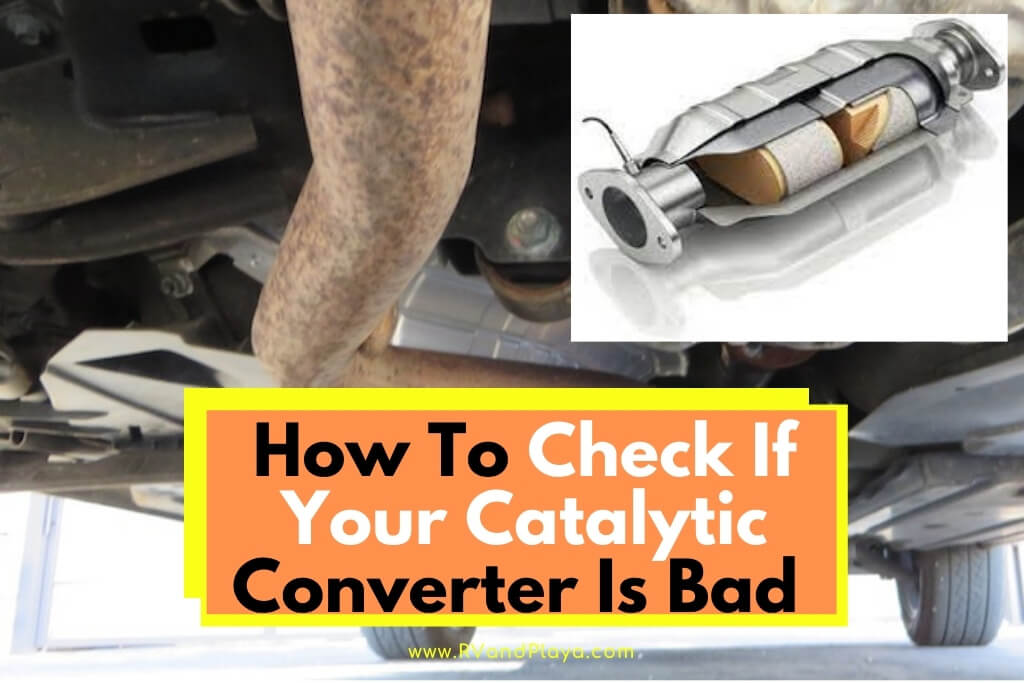 Have you ever wondered how to check if your catalytic converter is bad? Look no more. We´ve got you covered.

The Catalytic Converter is a vital component of a vehicle because it reduces bad emissions and keeps your vehicle within the boundaries of state laws.

The converter works to convert harmful gases into safe emissions before they’re channeled through the exhaust.

To check if your catalytic converter is bad, you’ll need a diagnostic tool. However, here are the most common symptoms you need to consider:

A catalytic converter doesn’t fail in a bubble and understanding the symptoms is almost as good as a code reader.

Some states require emissions inspections annually and some don’t.

If you happen to live in a state that requires them, dealing with a catalytic converter becomes more of a time issue than money, even though it’s generally considered to be an expensive repair.

How Do You Recognize The Symptoms Of A Failing Catalytic Converter?

If your catalytic converter is on its way out, you’ll likely experience symptoms of the impending problem before it goes.

If you own a scanner—and you really should—you can plug it into the vehicle’s OBD2 port, which is usually located under the driver’s side dashboard. When the scanner is finished, it will display the code that indicates what the problem is.

Depending on your scanner, you may have to Google the code with your make and model to determine what the code means. Every vehicle manufacturer is different, so one code doesn’t fit all.

TEST YOUR CATALYTIC CONVERTER IN 15 MINUTES! >> Check out the video below:

Can You Fix A Catalytic Converter Without Replacing It?

This largely depends on what stage of the failure process the catalytic converter is in. If you’re getting dark smoke or you smell sulfur, it’s too late to fix it on your own and likely needs to be replaced.

If you catch it early, however, there are a few things you can do.

Fuel additives help the engine’s overall performance and help burn off the excess accumulations inside a catalytic converter. If you’re used to filling up with standard gasoline—rather than plus or premium—a fuel additive will make up the loss.

Premium and Plus fuels already have additives in them, hence their higher expense. If you prefer not to use a fuel additive, you can try filling up with Plus or Premium gasoline for a while to accomplish the same thing.

A catalytic converter is only optimal at certain temperatures. If your daily commute only requires a few miles in slow traffic, the converter might not be able to burn off any build-up.

Give the vehicle a good workout by taking it down the interstate or another open road to get the heat levels up.

Catalytic converters are at their peak between 800ºF and 1,900ºF. At that level, they’re able to self-clean by burning off accumulations.

Remove And Clean It

On most models, the catalytic converter isn’t too difficult to locate and remove. Once you remove it, wash it with any degreasing detergent or use an actual degreaser.

You can also soak it for long periods in detergent and hot water.

Once it’s soaked and hand-washed, pressure wash it to blow off any of the remaining accumulations of grease and residue. Make sure it’s clean all the way and dry before replacing it.

Can You Replace A Catalytic Converter Yourself?

In almost all cases you can replace the converter yourself, however, some vehicles may be more difficult than others, depending on where the catalytic converter is located.

Also, it’s beneficial to replace it yourself, as the cost for a catalytic converter is generally quite high due to the precious metals it’s constructed with. So avoiding the additional labor costs and diagnostic fees makes the final price tag more palatable.

If your vehicle is out of warranty, consider purchasing a universal fit. Universal catalytic converters are often not as expensive, but they also have the potential of voiding your warranty, so only consider it if your vehicle’s warranty is no longer an issue.

It’s important to diagnose and repair the cause of the converter’s failure or the new one will be just as vulnerable, and you’ll have wasted a lot of money.

What Causes A Clogged Catalytic Converter?

There are two primary culprits behind clogged catalytic converters, oil and coolant. If either gets into the exhaust, it will—over time—inhibit the convertor’s capabilities and eventually clog it up completely.

Unfortunately, this also means that anything else coming from the engine can potentially run through the catalytic converter.

Coolant is a typical problem. Internal coolant leaks within the intake manifold can easily find their way into the exhaust system before reaching the catalytic converter.

Oil can be problematic as well as leaks in the system can find their way down into the exhaust. This is usually the case when you have worn valve guides, allowing the oil to escape around the shafts.

The problem with some of the causes is that they too can be seriously expensive to fix and much of it is not recommended for DIY projects unless you are an experienced enough mechanic with the necessary tools.

Will Your Vehicle Still Drive Without A Catalytic Converter?

In most cases, your vehicle will remain operable without a catalytic converter. Depending on the design of your vehicle, there may be some side effects, however.

Without a catalytic converter, your vehicle’s O2 sensors will not be accurate, which will cause them to use an incorrect amount of fuel, lowering your fuel mileage.

This also means your check engine light will never go away.

A catalytic converter will also increase the decibels on your car’s exhaust system, especially when cranking the vehicle up or accelerating. Since there’s less pressure in the exhaust, it can also reduce your low-end torque.

The EPA also has some strict regulations on not removing your catalytic converter and in some states, the fine is considerable.

There are also some benefits to not having a catalytic converter on your vehicle.

You’ll gain more horsepower because there’s no back pressure from the catalytic converter and exhaust flows more freely.

Your engine will no longer have to work as hard without that same backpressure, keeping it at lower operating temps.

Is Replacing The Catalytic Converter Worth It?

A catalytic converter is designed to last at least ten years. Most last the entire life cycle of the vehicle. If replacing it costs more than the value of the vehicle, it’s certainly not worth it.

If your vehicle’s value far outweighs replacement costs, then you should get it done.

While you can drive around for months, even years with a bad catalytic converter, if it ever becomes completely clogged, your vehicle will no longer be operable.

You also have to consider other factors as well, such as causes rather than effects.

Replacing the catalytic converter can cost a lot of money, but if it also involves a ton of labor costs repairing the cause of the faulty converter—oil seepage and coolant leaks—it just may not be worth it.

Catalytic converters are almost single-handedly responsible for the demise of classic muscle cars in America. However, in today’s world, they’re a necessary evil to help reduce emissions and the smog that still seems to permeate some big cities.

Luckily, they’re fairly resilient as car parts go and you shouldn’t have to worry about them for a long time.

During that period, routine tune-ups, personal maintenance, and the occasional fuel additive or premium fill-ups will go a long way towards sustaining a catalytic converter.

If the time ever comes that it’s going bad, know the symptoms and how to diagnose them before you even have to decide on whether or not a replacement is worth your valuable time and money. While searching for a car tuning system, you may have come across a company called Black Bear Tuner. If you own a GM vehicle, then this could be the right company for you to look into. Black Bear...

Have you ever wondered if seafoam could damage o2 sensors? Your car is very likely one of your most costly investments. Owning, operating, and maintaining a motor vehicle is expensive.  You...