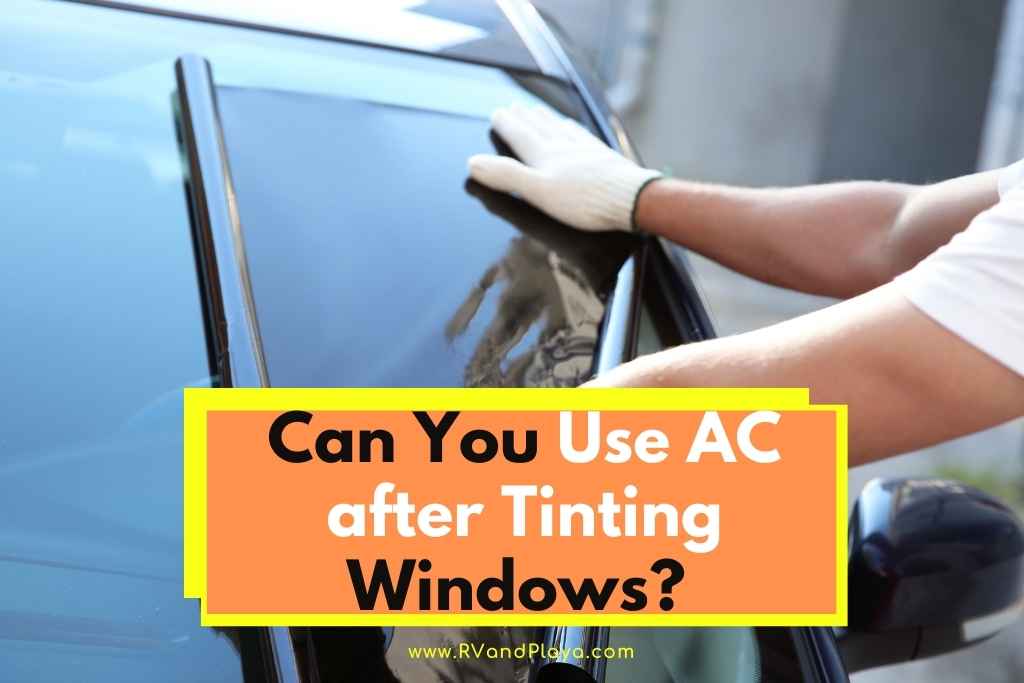 Tinting is getting more and more popular among car owners, and it provides many benefits. But, have you wondered what you should or should not do right after your windows were tinted?

Are you looking for the answer to the question can you use AC after tinting windows? Look no further because we have all the answers you need.

So, let’s get into details.

What Is Windows Tinting?

There are three ways to tint windows. Factory tinting is done by either mixing colors with molten glass, or by placing a colored vinyl between two layers of glass, instead of the standard transparent.

The third is the aftermarket way, by applying special scratch-resistant semi-transparent film on the windows.

And this third way to tint the windows is what we are interested in today. The films come in various percentages of how much light they let through.

Most commonly used are letting through 15%-35% of light, but some can be even under 5%. But such dark films are illegal in some states, so you should check beforehand.

Can You Use AC After Tinting Windows?

In short, yes you can. After having your windows tinted you can freely use the AC in your vehicle. Some people worry that the temperature difference between the outside and the inside of your vehicle could damage the film. But in truth, this is not the case.

Using the AC can slightly prolong the drying process of the film and of the glue that holds it on the glass. But, that is a very short time when you take into account how long it takes to dry.

It takes between a few days and a few weeks for it to dry, depending on the outside temperatures. Using AC adds a couple of hours of drying time.

Read also: The 8 Travel Trailers with the Most Windows

Can You Use Windows After Tinting Them?

You should not roll your windows up and down soon after having them tinted. Films used for tinting have glue on the side that touches the glass which is activated with large amounts of soapy water.

And this water stays under it until it naturally evaporates.

So, for a while after installation, the film is not properly glued, and rolling down your windows can move the film, wrinkle it, and generally ruin it.

Until the film is dried properly, windows must be kept up.

Can You Wash Your Vehicle After Tinting Windows?

Almost always the windows tinting films are installed on the inside. So, washing your vehicle will not damage them. But, it will significantly prolong the drying time.

When you wash your car, the air inside of it gets moist, and then the water trapped under the film can’t evaporate easily. So, you should postpone washing your car.

How To Remove Bubbles From Freshly Tinted Windows?

If you notice some hazy bubbles on your recently tinted windows you should not worry about how to remove them. They will go away by themself. This is just an area with slightly more moisture left from the installation process.

An area that is thus drying slower than the rest of the film.

It is perfectly normal, and though it may look quite dramatic, it is not a cause for concern.

Many people tint their windows for the wow effect because it looks badass, or for the increased privacy because it makes the occupants less visible from the outside. But those are not the sole advantages of having the windows tinted.

There are a few other reasons why you should consider doing it if you haven’t already. They are:

So, let’s check them one by one.

We all drive a lot, and on sunny days we are exposed to Sun’s UV rays which are not very good for our skin. So, decreasing the amount of UV light that passes through the vehicle’s windows is a good thing. And window tint films stop up to 99% of the UV light.

But that is not the only advantage of blocking the UV light. The interior of your vehicle also is damaged by UV light.

Have you ever noticed how the black dashboards of old cars are not really black, but dark gray? It’s UV lights. Window tinting will greatly slow down the interior fading.

This is also an advantage of blocking the UV light, but people are not usually aware of it. When the Sun shines everything it shines on is heated by the UV rays, not by the visible light.

So, blocking the UV light will prevent the interior of your vehicle to get warm.

So, you will have to turn on the AC less often, and it will be much easier to cool your car.

With the occupants being less visible inside the vehicle it gives them a higher level of privacy. But, if some potential carjacker is thinking about stealing your vehicle, tinted windows make them really reconsider such a decision.

Because they can’t know whether there is someone inside.

One of the big distractions when driving on a busy highway can be the low Sun on the horizon on your side. Also, all other light sources can be very distracting when shining in your peripheral vision.

Because tint films block both visible and UV light, these problems practically disappear.

There are many misconceptions about tinting your car windows, and many things people can do wrong with freshly tinted windows.

So, if you were wondering can you use AC after tinting windows, we hope that now you know the answer.

You can use the AC right after tinting your car windows, nothing bad will happen to the film. But, you must not roll them down, as it can very likely damage the tint film.

Also, you should avoid washing your car until the film is properly dried.

link to Is Car Insurance a Waste of Money? (The Truth – Nobody Is Talking About!)

Do you know if car insurance is a waste of money? this is one of the questions our readers ask a lot. Well, we´ve got you covered. Car insurance can be pricey. Because of that, you're not alone...

Do you know how to dispose of old gasoline properly or what to do with leftover gasoline?  these are the questions our readers ask a lot. Well, we´ve got you covered. Gasoline doesn't last...