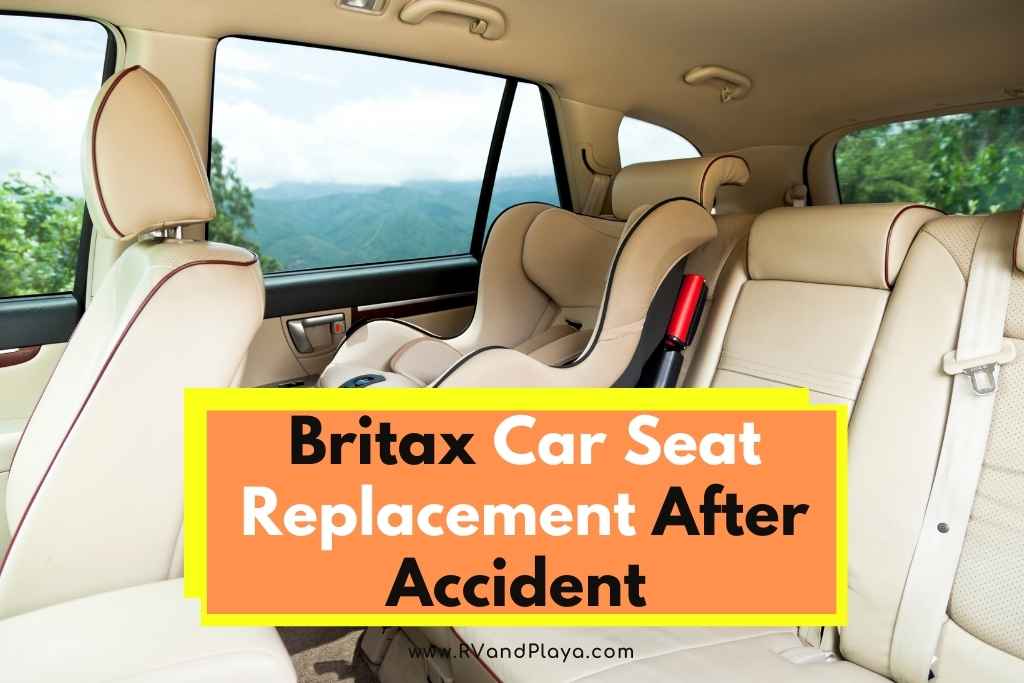 Have you ever asked yourself or your friend what Britax car seat replacement policy after an accident is or will my car insurance pay to replace a car seat?  Well, you are at the perfect place to find the answer to such a question.

Britax is a common choice for parents looking for a safe car seat for their kids. But, if you’ve heard that all car seats need to be replaced after an accident no matter the severity, you may be wondering what to do with your Britax after your recent accident.

Britax car seats must be replaced if the car is involved in a moderate to severe crash. If the crash is minor, the seat may not need to be replaced.

Britax is a popular car seat brand among parents, and if you are shocked to hear your car seat may not survive a crash, don’t think that this is because Britax car seats aren’t constructed well. In fact, almost every car seat company recommends replacing your car seat after a crash.

Britax car seats are constructed with SafeCell technology. The SafeCell in the car seat base creates a zone that helps absorb energy from a crash and keeps it away from the baby. They have been making car seats for over 50 years and have been able to perfect their car seat construction.

Britax has also received many different awards over the years, including:

So, it isn’t the car seat construction that makes it important to replace after a crash, but rather, this is just how car seats are intended to work.

They absorb the crash so it has less of an effect on the baby, but this can weaken the car seat and make it less effective if a crash happens again.

Read also >> Is Car Insurance a Waste of Money? (The Truth – Nobody Is Talking About!)

What Are The General Guidelines On Replacing Car Seats After A Crash?

When car seats first were widely used it was recommended they be replaced after any crash, regardless of the severity. This means that even if your parked car was dinged in a parking lot, you would likely want to replace your car seat.

There are some car seat manufacturers who still request a replacement of their car seats after any crash.

A general guideline from the National Highway Traffic Safety Administration (NHTSA) is to replace all car seats and booster seats after a moderate to severe crash. However, they don’t recommend replacing after a minor crash.

The NHTSA does also state that if the car seat manufacturer recommends replacing after a minor crash you should still comply with their instructions over the generic guidelines.

Any specific questions about your car seat should be brought up with the manufacturer.

The NHTSA also sets certain parameters on what they define as a “minor” crash.

How Do I Replace My Britax Car Seat?

Britax actually has a voluntary Crash Exchange Program that parents can participate in! This allows parents to send their broken car seats in and receive a new one, free of charge! Britax has realized that a car crash can be traumatic enough without the added worry of how to afford a new car seat.

In order to qualify for free replacement, the parents must submit:

Another option for those who may be switching car seat brands or need a new seat immediately, many insurance companies will also reimburse the cost of a new car seat.

You can call your insurance provider and look over your policy to ensure this is included.

When Do Britax Car Seats Need To Be Replaced After A Crash?

Britax follows the guidelines set by the NHTSA and states that their car seats only need to be replaced after a moderate to severe crash.

They use the same five criteria that the NHTSA uses to define a minor crash and do not recommend the replacement of the car seat in that event.

How Does The Britax Replacement Policy Compare To Other Manufacturers?

While we can’t look at the guidelines of every single car seat manufacturer, we can look at a few of the most common.

As you can see here, it is a pretty mixed bag on whether the car seat must be replaced after a crash, some manufacturers recommend always replacing, no matter how minor the crash was, whereas others only recommend replacement after a moderate to severe crash.

This just makes it that much more important to check the recommendation of your manufacturer.

What Does The NHTSA Define As A “Minor” Car Crash?

The NHTSA sets five basic criteria that must be met in order for a crash to be considered minor. These same criteria are often used by car seat manufacturers.

It is important to understand that ALL FIVE criteria must be met, if all but one are met, the crash would move into the moderate category and the car seat would need to be replaced.

The five criteria are:

If all of these are true after a crash then it can be considered minor, and the car seat MAY not need to be replaced, but always remember to consult the individual website or call the manufacturer.

Britax doesn’t recommend the replacement of car seats involved in a minor crash, but if the crash doesn’t meet all five “minor crash” criteria set forth by the NHTSA, then replacement is recommended.

Britax offers free replacement of her car seats in the event of a crash, which should help ease the burden on the parent(s).

Always remember to check your specific manufacturer for car seat replacement guidelines as the generic NHTSA ones do not apply to every car seat out there.

Do you know what State Farm's car seat replacement policy is? this is one of the questions our readers ask a lot. Well, we´ve got you covered. Despite its critics (and there are many of them)...

Continue Reading
link to Is Car Insurance a Waste of Money? (The Truth – Nobody Is Talking About!)

Do you know if car insurance is a waste of money? this is one of the questions our readers ask a lot. Well, we´ve got you covered. Car insurance can be pricey. Because of that, you're not alone...