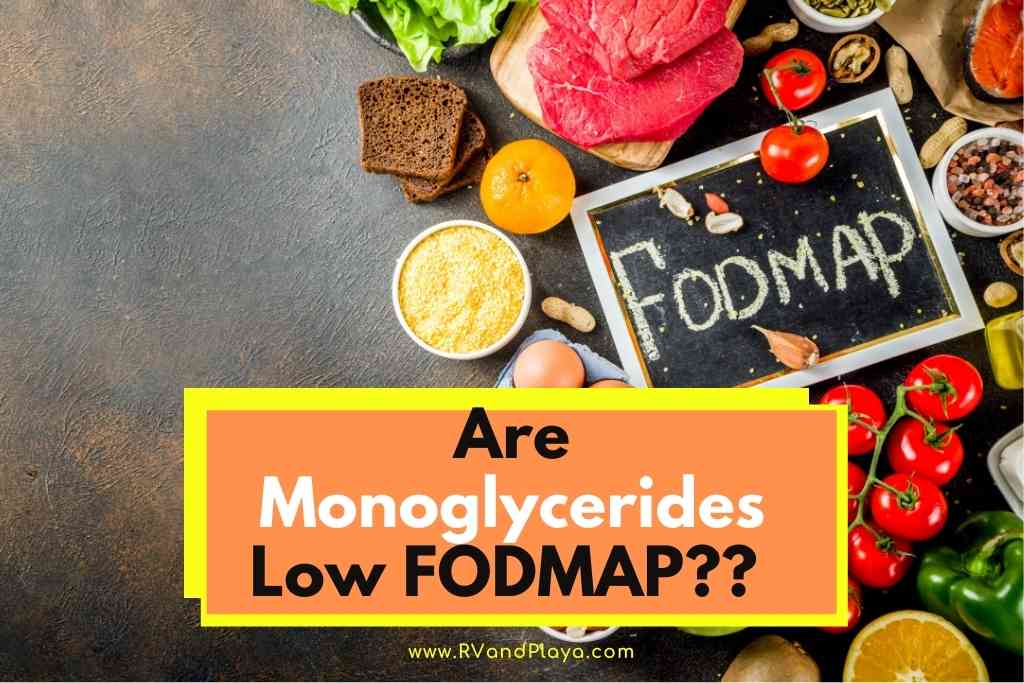 Have you ever asked yourself if Monoglycerides Low FODMAP are? Well, you are at the perfect place to find the answer to such a question.

Low-FODMAP diets are a clinically proven way to reduce irritable bowel syndrome (IBS). While most food additives have not been studied specifically for how they affect people with IBS, certain food additives are known to be either high- or low-FODMAP, depending on their chemical make-up.

Discover the truth about monoglycerides, and learn how to decipher those often confusing ingredient labels to help know which food additives are high- or low-FODMAP.

Other glycerides such as diglyceride and triglyceride are made up of glycerol and two or three fatty acid chains.

Monoglycerides can be either saturated or unsaturated fat, and they are found in small amounts in almost all foods. They either occur naturally or are derived from plant or animal fats or oils and used as a food additive and an emulsifier.

Emulsifiers stop water and oil from separating. This makes them valuable as food additives to improve texture, quality, and shelf life. For example, an emulsifier helps keep the oil in peanut butter from separating out.

Emulsifiers such as monoglycerides are used in very small amounts in foods and are not considered harmful. However, little is known about how large amounts of such emulsifiers may affect the body.

Monoglycerides do contain a small amount of trans fat, which was phased out by the FDA beginning in 2013. However, because monoglycerides are classified as emulsifiers and not lipids, they don’t fall under the ban.

Just because monoglycerides are considered safe, doesn’t necessarily mean you could or should consume large quantities of them.

Many foods containing monoglycerides are processed foods, which generally contain large amounts of sodium, saturated fats, and sugars which are known to cause health issues.

FODMAP is an acronym that stands for “Fermentable Oligosaccharides, Disaccharides, Monosaccharides and Polyols”. In plain English, FODMAPs are short-chain carbohydrates (sugars).

Certain FODMAP sugars cause gastrointestinal distress and trigger irritable bowel syndrome (IBS). For those suffering from IBS, following a low-FODMAP diet helps identify, limit, and/or eliminate these triggers from their diet, alleviating their IBS symptoms.

What is the FODMAP diet?

A FODMAP diet is a 3 part diet designed to help identify and eliminate certain high-FODMAP foods that trigger IBS. Symptoms of IBS include:

The 3 steps of a FODMAP diet:

A FODMAP diet is recommended to be followed under the supervision of a doctor. This is because it is very restrictive at first as many foods are eliminated during the first step of the diet.

It is important to note that a low-FODMAP diet is not intended as a weight-loss diet. It is purely intended to eliminate or reduce GI irritation and distress. In fact, many high-FODMAP foods are highly beneficial for healthy individuals who don’t suffer from IBS.

Foods that are known to be high-FODMAP and can cause GI and bowel irritation are:

For example, ice cream will contain monoglycerides as an emulsifier. However, ice cream is high-FODMAP because it contains dairy, which is high in lactose, a disaccharide (the “D” in FODMAP).

How To Know if food additives are high-FODMAP?

Most food additives haven’t been specifically tested for FODMAP diets, however, there are a few clues you can use to determine if an item in the ingredient list for a food product is high-FODMAP:

Ingredients whose names end in “-ol” are almost always a type of polyol, sugar alcohol, and the “P” in FODMAP. Some examples are sorbitol, erythritol, and mannitol.

Ingredients whose names end in “-ose” are sugars, many of which are oligo-saccharides, di-saccharides, and mono-saccharides, the “ODM” of FODMAP. Some examples are fructose, lactose, dextrose, and maltose.

Other names for monoglycerides:

You may find monoglycerides on an ingredient list by another name. These will be low-FODMAP additives:

link to Is Sunflower Lecithin Low Fodmap (The Truth!)

Have you ever asked yourself or your friend if Sunflower lecithin low Fodmap is? Well, you are at the perfect place to find the answer to such a question. People with IBS and sensitive digestive...

Sticking to a FODMAP diet can be difficult, especially as you start introducing new processed foods into your meal plans. When it comes to snacks, you may even be approaching it like a minefield...