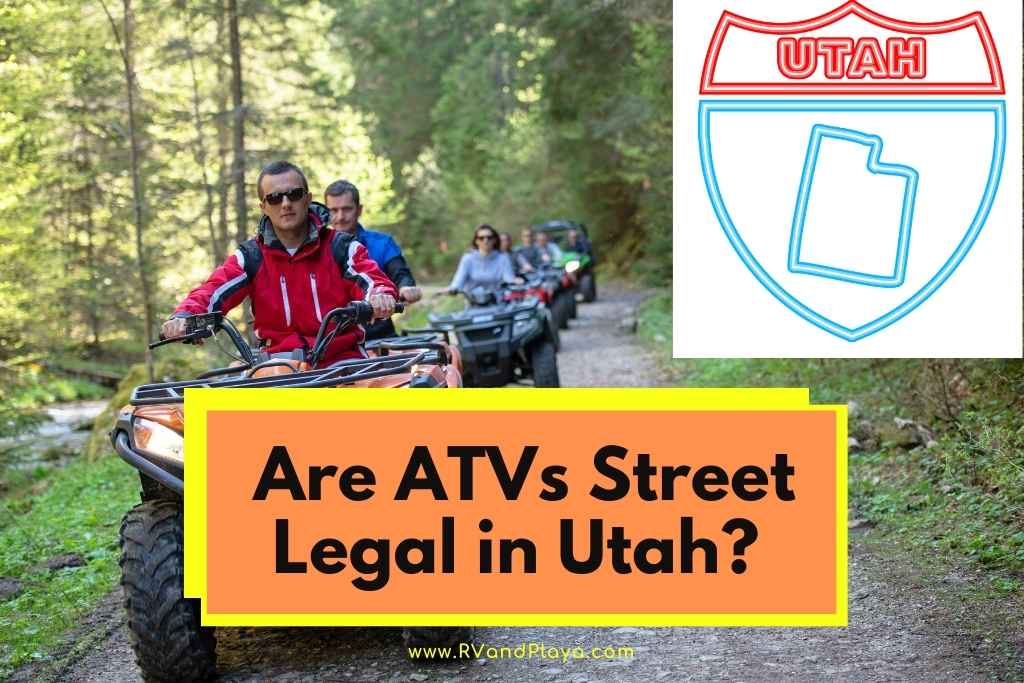 Did you ever need to know if TVs are street legal in Utah? Well, you can stop looking, because you have found the place with all of the answers.

In Utah, it is legal to operate an ATV on all streets and highways if it is properly registered and the rider has a proper driver’s license, insurance, and safety gear. But, certain exceptions exist, and ATVs are not allowed on some roads.

In this state, ATVs must conform to regulations and requirements very similar to those for motorcycles. But with some additions. So let’s see everything you need to know before setting off on an ATV adventure in Utah.

Are ATVs street legal in Utah?

Yes, for all intents and purposes ATVs are street legal in Utah like any other vehicle. Among the streets, roads, and highways, there are two exemptions where you are not allowed to ride an ATV.

First are all roads that are part of the interstate highway system.

The second exemption is highways in the first-class counties that satisfy two conditions:

When riding on a highway, you must obey the posted speed limit or general ATV speed limit of 50mph, whichever is lower.

In case you are on a highway with a posted speed limit higher than 50mph, you must ride on the far right side of the highway and also have a reflector or reflective tape both on the front and back of the vehicle.

The Utah Statutes define first-class counties as those with a population of more than one million. And currently, that is only Salt Lake County.

For an ATV to be street-legal and allowed on roads in Utah, it must have:

In case a vehicle doesn’t conform to the above requirements from the manufacturer, it can be modified. The vehicle also must be registered and insured, and the rider must have a proper driver’s license. Out-of-state ATV registrations are valid in Utah.

Read also: Are ATVs Street Legal in Florida? (Law You Need To Know!)

Can I ride an ATV on public lands in Utah?

Except on the public streets, in Utah, you can ride an ATV on many public lands, roads, and trails if they are permitted and signs are posted on them.

State agencies have the right to designate public lands that are in their jurisdiction as permitted. And such permitted areas and trails exist in state parks and forests.

This means that local municipalities are only allowed to designate permitted trails that are otherwise prohibited for vehicles.

Can I ride an ATV on private lands in Utah?

You are allowed to operate an ATV on private land. And if the vehicle is used only on private property, it does not have to be street legal or satisfy all requirements of street legality.

On private properties, the only limit is permission from the owner.

Do I have to register or title an ATV in Utah?

Titling and registering an ATV are requirements for it to be street legal and allowed on roads and highways.

Titling is done at the same time when it is being initially registered, and it requires that you submit the completed form TC-656. For the initial registration, you will also need:

Registration is valid for a year and must be renewed 60 days before its expiration.

Do I need a driver’s license to operate an ATV in Utah?

For riding on public lands and roads and trails that are exclusively permitted for ATVs, underage riders are allowed with an OHV education certificate or driver’s license. If they only have an OHV certificate, they must be supervised by an adult.

Are helmets mandatory in Utah?

Helmets and goggles are mandatory in Utah for anyone that is younger than 21, while as passengers all persons under age must wear them too.

Read also: Do ATVs Have Titles in Texas (ATV and UTV Registration Laws in Texas)

Are ATVs street legal in Utah? Yes, they are, if they are registered, insured, and the rider has a driver’s license.

Then you are allowed to drive them on the public streets and roads, and public lands too. But, per letter of the law, some highways in Salt Lake County are not permitted for ATV traffic.

link to Are ATVs Street Legal in Maryland? (ATV, UTV Laws To Know)

Have you ever wondered are ATVs Street legal in Maryland? Well, look no more, because we have all the answers about ATV and OHV street legality in Maryland and where you can ride them. All...

Continue Reading
link to Can You Sleep At Rest Stops In Utah? (UPDATED RULES)

Have you ever wondered if you can sleep at rest stops in Utah? Look no more. We´ve got you covered. If you love your states that have seemingly zero rules about how long you can stay at a rest...