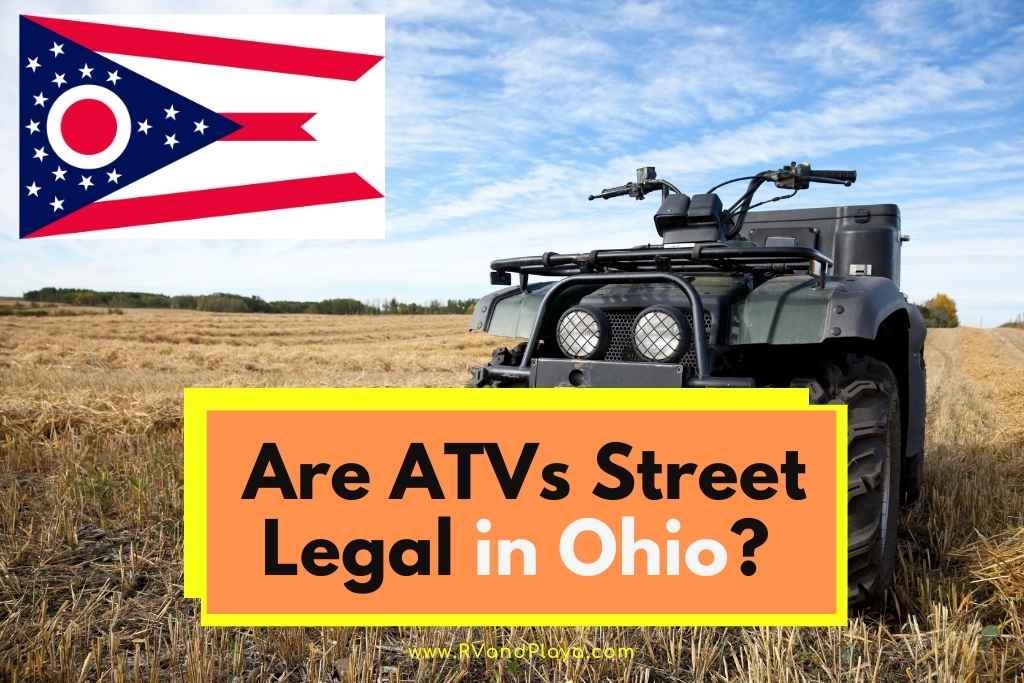 Have you ever wondered if ATVs are Street legal in Ohio? Well, look no further as we have all the answers you need. Including the answers to questions, you are probably unaware that you should be asking.

Per Ohio State Statutes, ATVs are not allowed on any road, street, highway, or public land; if they are not properly registered and you have a valid driver’s license. But, some more comprehensive limits exist, and local municipalities have a right to designate streets and roads for ATV use.

Sorting out exactly where and when you are allowed on streets and roads in Ohio is not easy. But, let us try to do precisely that.

Are ATVs Street legal in Ohio?

They are also not allowed on any limited access highways, freeways, or right-of-ways; except in an emergency when an appropriate public safety agency designates it for use.

These roads are only allowed to be crossed by ATVs, and also to drive on their shoulder or berm if it exists.

City, township, or county; streets and roads are not permitted for ATV use unless the authority which has the jurisdiction over them designates them as permitted.

Can I ride an ATV on public lands in Ohio?

You are not allowed to ride an ATV on any public land in Ohio unless some public land is designated as permitted and clearly marked with signs.

The state of Ohio has several parks and trails that are specifically allowed to be used for off-roading. And the allowed vehicles on them include the ATVs.

Can I ride an ATV on private lands in Ohio?

Yes, you can use an ATV on private land in Ohio with almost no limits. You can do so only with the permission of the owner or the person that has the right of possession of that land.

When used on private property for agricultural purposes, you do not have to register your ATV either. Nor does the requirement of having a driver’s license apply.

Do I have to register or title an ATV in Ohio?

To be able to drive an ATV on public lands and roads, where they are allowed, it must be properly titled and registered.

The titling fee is $15, and all required documents you need to submit to a County Clerk of Courts office. When titling, you will need to have the Manufacturer’s Certificate of the Origin or existing Ohio certificate of title.

Besides these, you are also liable for the payment of county sales taxes on the purchase price. Their amount varies between counties, and the exact amounts you can see on this map.

If you are transferring the title from out-of-state, you will need:

Registration of all ATVs that are not used solely for farm work on private property is compulsory.

To be able to register an ATV, you need the title, Ohio driver’s license, state ID, or Social Security card; and bill of sale for it.

You can register your vehicle at any deputy registrar’s office, and the registration fee is $34.75.

But both 45-days temporary tags and one-year temporary registrations are available for ATVs from states that do not require ATV registration.

Temporary tags cost $7, while the temporary registration fee is $14.75 and is valid until December 31 of the year when it was purchased.

Do I need a driver’s license to operate an ATV in Ohio?

Yes, if you have a driver’s license, CDL, probationary license, or motorcycle endorsement; you can operate an ATV on public streets and public lands designated for use by off-road vehicles.

For persons younger than 16 years it is illegal to operate on any lands and roads that are not privately owned unless they are supervised by an adult license holder.

The State law gives power to the Ohio Department of Natural Resources to permit riders aged between 12 and 16 on the lands controlled by this department without a driver’s license if they are supervised by a parent or legal guardian that is a license holder.

Are helmets mandatory in Ohio?

While helmets are not required for adult riders on the permitted state roads, underage riders must wear them. Also, agencies of the state parks and trails have the legal right to impose stricter regulations than prescribed in the state law.

Because of this, the use of both helmets and goggles is mandatory in all state parks and trails.

Local municipalities also have such right to regulate helmet use with the bylaws. So, it is best to inform yourself about this before hitting the road.

Besides this, all ATVs must have:

Are ATVs Street legal in Ohio is a question many people are looking for answers to. As you can see from the above, they must be registered and titled, and a rider must be a driver’s license holder to be allowed on permitted state public roads and lands.

Local municipalities also have a right to designate permitted roads and lands that are in their jurisdiction.

The only roads where ATVs are not allowed under any circumstances are the interstate highways.

link to How To Get A Title For A Dirtbike In Ohio (Best Tips!)

Do you know how to get a title for a dirtbike in Ohio? this is one of the questions our readers ask a lot. Well, we´ve got you covered. If you own a dirtbike, then it is important that you obtain...

Continue Reading
link to Can You Sleep At Rest Stops in Ohio? 8 Facts (Explained)

Have you ever wondered if you could sleep at rest stops in Ohio? When it comes to staying at rest stops, Ohio has some of the most relaxed laws in the country. Let's take a look at them, shall...