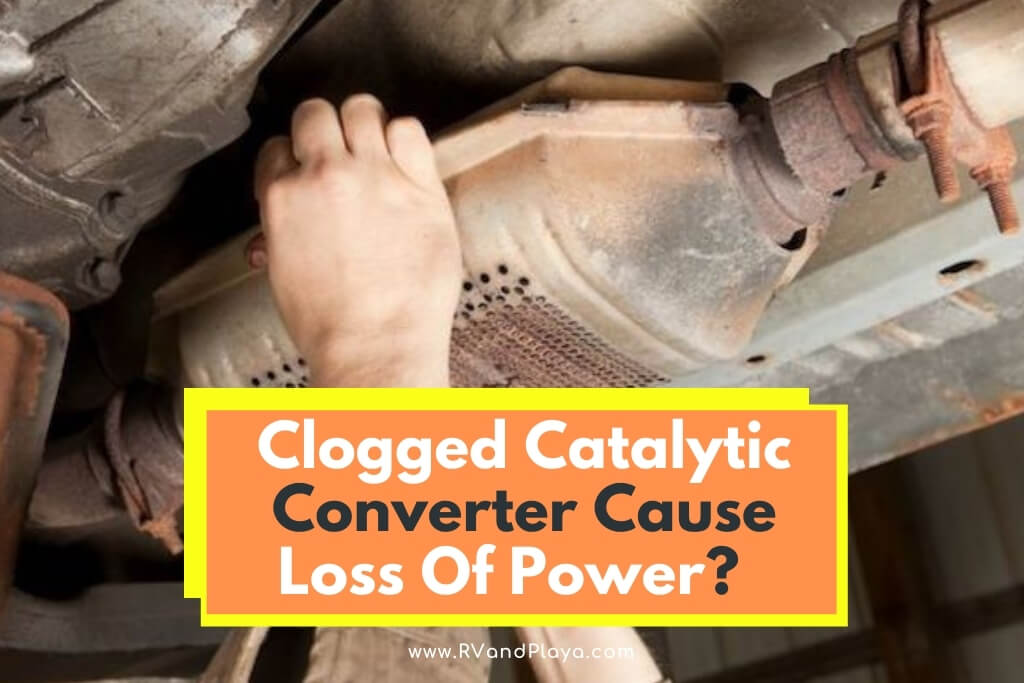 Have you ever wondered if a clogged catalytic converter would cause loss of power? Well, look no further because you are at the right place to find answers to these questions.

But first, what is a catalytic converter?

It is a part of the exhaust system, a device that in essence makes the exhaust gasses less polluting.

It contains an aluminum or ceramic honeycomb mesh coated with platinum and palladium, these two elements chemically react with carbon monoxide and unburnt fuel.

In this reaction, it produces carbon dioxide and water, so decreasing pollution.

The so-called three-way catalytic converter even decreases the amounts of nitrogen oxides from the exhaust gases, making them even less polluting.

This reaction happens because the catalytic converter gets hot enough from the exhaust.

Use a vacuum gauge to confirm an exhaust restriction.

How Do You Recognize The Symptoms Of A Clogged Catalytic Converter?

The internal combustion engine, when functioning properly, draws in the air-fuel mixture, burns the fuel, and then expels them through the exhaust system.

But, when the catalytic converter is clogged, this process doesn’t go as expected, and there are some signs you can attribute to it being clogged.

The very first symptom you may notice is the check engine light being on.

Modern cars have numerous sensors which can trip this light, and narrowing down to which particular one is a culprit can be a chore.

Of all these sensors, two are related to the exhaust system and can cause this light to come on. Those are the O2 or lambda sensor, and exhaust temperature sensor, and in case of a clogged catalytic converter one or both of them can report problems.

A clogged catalytic converter is unable to perform its function, so the exhaust gases at the tailpipe will have a higher concentration of carbon monoxide, which can be detected by emission testing.

But before you run to the nearest shop that does this test, there is another sign you can check for, that’s a sulphuric smell of rotten eggs coming from the rear of your vehicle.

Another symptom is a decreased fuel economy, you may notice that you are more often filling up your gas tank and that it doesn’t really last you as long as it used to.

The third symptom you may experience is a difficult engine start, when cold the engine could have considerable problems starting or stalling after just a couple of seconds of running.

The very certain sign that your catalytic converter is clogged, is the loss of power during acceleration and misfiring.

When the catalytic converter is clogged it creates backpressure in the exhaust manifold, which in turn increases the temperature in cylinders, which then can cause premature detonation of fuel while the piston is moving upward, and it will slow down too far from the top dead center position.

Because all pistons are connected to the same crankshaft, slowing down of one piston will slow all others, and you will notice that you have to press the accelerator pedal harder or downshift earlier on uphills than you are used to.

This is due to the loss of power going to the wheels and acceleration, both caused by the clogged catalytic converter.

Another way that clogged catalytic converter caused loss of power is the leakage of exhaust gases back in the cylinder due to excessive backpressure in the exhaust manifold.

This will cause that the burn cycle in the cylinder is incomplete, which in other words means a smaller bang and less energy produced in it and transferred to the wheels.

What Causes A Clogged Catalytic Converter?

While catalytic converters are generally intended to last the whole lifetime of the vehicle, various conditions can lead to it becoming clogged.

The most common cause is related to the age of the vehicle itself, and thus the engine, and in reality, the clogged catalytic converter can be a symptom of issues somewhere else.

With the age, the engine and its various parts can develop several issues that can lead to problems with catalytic converters.

But those same issues can develop even on newer vehicles.

The presence of coolant or engine oil in the exhaust system can lead to soot buildup which can clog the converter when they burn inside it.

Antifreeze or oil present in the combustion chamber and consequently exhaust, are symptoms of two serious problems, in case of coolant of a cracked engine block, while in case of oil of cracked head gasket.

A faulty 02 sensor can cause the engine to run too rich air-fuel mixture, which can lead to the presence of unburnt fuel in exhaust gasses and problems with the catalytic converter.

Similar issues with unburnt fuel can be caused by bad spark plugs or spark cables or the ignition distributor.

But the most common problem, which slowly deteriorates catalytic converter over time, are the short trips.

If you are almost always making trips shorter than 15 minutes, the catalytic converter will almost never reach a sufficiently high temperature to work properly.

So, the majority of unburnt fuel will slowly turn into soot which clogs it.

Can You Fix A Catalytic Converter Without Replacing It?

Depending on how clogged your catalytic converter is, there might be a way to at least partially clean it and improve the performance of your engine.

Naturally, before doing so, it is very important to find and remove the cause of clogging in the first place, as some underlying problems can still hamper your car’s performance even with a clean converter.

There is much advice around the internet, but some of them are either pointless or unnecessary.

Some suggest various fuel additives, making bombastic and unrealistic claims, and in reality work only at enriching producers of such products.

There are also suggestions of adding paint thinner and similar substances, which actually can foul your engine cylinders, valves, and catalytic converter just as same as pouring diesel fuel in a petrol engine car can.

There are actually only two ways that could clean converter somewhat.

First is the simple cleaning it with a pressure washer or leaving the converter overnight in a hot water solution of dish soap or any other household degreaser, such as barbecue cleaner.

Soaking it overnight is potentially a better choice as it removes any chance of damaging the internal mesh of the converter.

The other potential fix is what some people call the Italian tune-up.

When the engine is working properly and the catalytic converter is able to reach proper working temperature, it basically cleans itself.

And the Italian tune-up is just that, pushing your car to the point when the catalytic converter heats up enough to burn the soot.

This can be done in two ways, either by accelerating hard on an empty road and trying to maintain the car’s top speed over a few miles or when parked revving the engine to some 70-80% of its RPM range and keeping it there for few minutes.

Both of these ways can potentially clean smaller build-ups of soot, but only if the mash is not damaged.

Can You Replace A Catalytic Converter Yourself?

Replacing a catalytic converter in a shop can be a very costly fix, first and foremost due to the price of the converter itself.

This can be a good reason to do it yourself, as you can save a few hundred dollars from a thousand to a few grand shop bill.

There are two ways that the converter is mounted to the rest of the exhaust system, either it’s bolted or welded.

In the case of a bolted catalytic converter, you need four jack stands for easier access.

Most often on cars the muffler, catback, and resonator; are welded together and then bolted to the converter which is on the other end, toward the engine, bolted to the exhaust manifold.

So, it is easy to recognize it, and all you need to do is first unscrew the O2 from the converter and then unbolt it from the manifold.

It saves effort to remove the resonator and the rest on a bench, instead of lying under the car.

Is Replacing The Catalytic Converter Worth It?

Keeping your vehicle running properly is the most certain way to keep its running costs to a minimum.

But whether replacing the catalytic converter is worth the money depends on two factors.

First, how much it is clogged. If there aren’t any other issues so-called Italian tune-up could be the more economical thing to do.

Second, are the causes of clogged converter removed, if they are not you will not see enough decrease of running costs and the new converter will also get clogged relatively quickly.

As a matter of general rule, replacing it does make up for the initial cost through decreased costs of using the vehicle.

Replacement also decreases the chances of persistent misfiring of the engine, which eventually can cause knocking and costly damage to valves or valve pushrods. link to What Happens When The Catalytic Converter Goes Bad (Symptoms)

Have you ever wondered how to clean a catalytic converter with seafoam? Well, look no more. We´ve got you covered. Catalytic converters are your vehicle’s emissions control unit, converting...