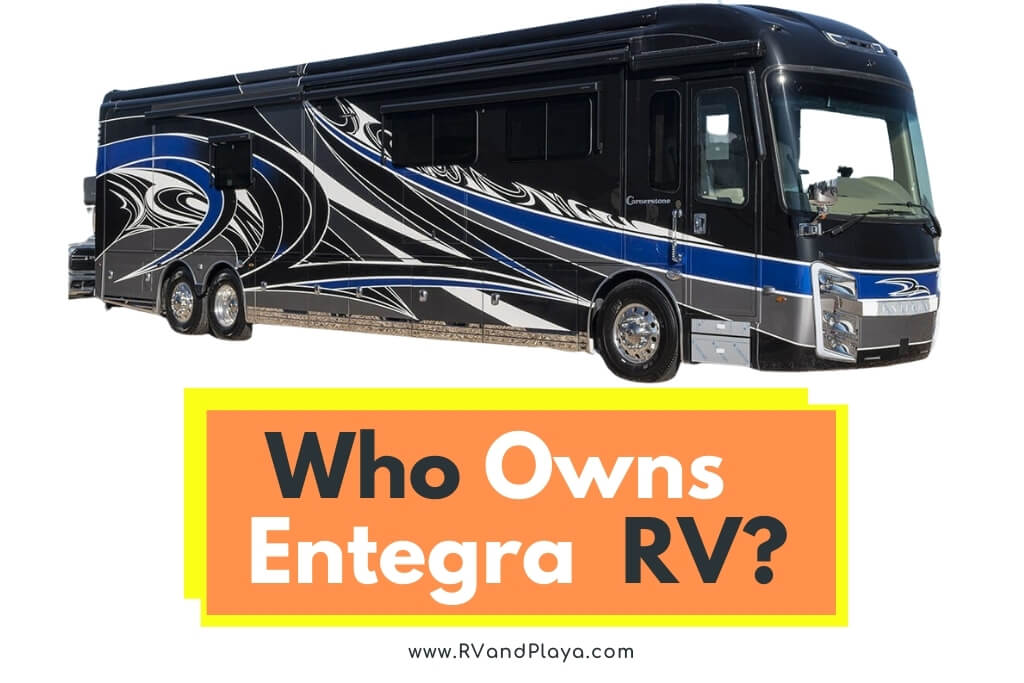 Have you ever wondered who owns Entegra RV? Look no more. We´ve got you covered.

Entegra Coach is one of the largest RV producers in the United States. As a result, we get a ton of questions with regard to who owns Entegra. Well, on this page, we are going to answer that question once and for all!

So, who owns Entegra RV? Jayco has owned Entegra since 2008. It is evident that the Jayco ownership had a massive impact on the way in which Entegra is being run.

Entegra is a luxury RV company. While they most offer the larger RVs, you will also find a good number of Class C and Class B vehicles in their range. Each of them has that traditional Entegra flair that the company is loved for.

Due to the current owners of Entegra (more on those soon), a lot of the history of the company seems to have been lost to time. In fact much of the Entegra history paints the picture of the company getting started in 2008.

However, we can assure you that the company has been around for a lot longer than this.

It is likely that a good amount of the history of the company has been removed simply because Entegra is just a brand that is part of a much larger operation nowadays.

This leads us neatly onto the next point. Bear with us, because the ownership of the company is going to get quite complicated.

The company is currently owned by Jayco. As we said previously, Jayco has owned Entegra since 2008. It is evident that the Jayco ownership had a massive impact on the way in which Entegra is being run.

For a long while, if you wanted to purchase an Entegra vehicle, you would have to wait for an incredibly long time. The company prided itself on the fact that each vehicle would be built one at a time.

This resulted in an almost ‘hand finished’ look to their vehicles. When the company was purchased by Jayco, the speed at which they started to produce their vehicles rose quite quickly.

Although, because Entegra Coach RVs are still at the luxury end of things, there isn’t so many of them being ordered that they have lost that handcrafted feel.

Jayco also seems to have influenced the number of RV models that Entegra Coach was able to offer. Starting in 2018, the company started to produce Class B and Class C RVs for the very first time in their history.

As we said, the ownership of Entegra is a little bit on the complicated side of things.

It is true to say that Jayco is the current owner of Entegra. However, Jayco is not a company that operates independently. Instead, Jayco is owned by Thor Industries. We wouldn’t be surprised if you have already heard of them.

This is due to the wealth of brands that they offer, and that includes Entegra Coach.

So, who owns Thor Industries? Well, again, the ownership side of things gets even more complicated. Thor Industries is a Public Limited Company, or a PLC for short. This means that the company is listed on the New York Stock Exchange (NYSE).

👉 Now, we do want to point out at this point that there is no single person that seems to own a controlling stake in Thor Indusrtries.

👉 Now, interestingly, not one of the larger owners of the business will be other companies operating in the RV sector. In fact, all of the companies that have a major stake in Thor Industries will be investment firms and pension companies.

This means that they are not really invested in anything that happens at Thor Industries. They just want to collect the cash from their sales at the end of the year, or perhaps sell some of their shares that quickly gain in price.

Who Makes the Decisions at Entegra Coach?

Sadly, there is no much information out there about who controls the company at Entegra Coach. However, since it is likely that it is operated as nothing more than a brand, there probably are not any major decision-makes at Entegra Coach.

You just have your staple managers and the like, nothing too crazy. At the company level, they will likely be responsible for the recruitment of new staff, or perhaps working with the budget that they have been given by Jayco.

👉 It is likely that all of the major decisions at Entegra Coach will be covered by the CEO of Jayco, Derald Bontrager. His job is to oversee the day-to-day running of all of the businesses that Jayco owned before they were purchased by Thor Industries.

It is impossible to know his exact responsibilities, but we have no doubt that he is going to be playing a big role in the marketing of the various products in the Entegra range, and even setting the budgets that they have to make new products.

👉 Of course, since Jayco is owned by Thor Industries, they are going to be overseen by Thor. The CEO of Thor is currently Bob Martin.

He is going to be making the major decisions for Entegra Coach. This means that, for instance, if Entegra wanted to open a massive manufacturing facility, the ultimate decision would need to be carried out by Bob Martin.

Chances are that he does not really make that many decisions nowadays. However, he certainly is going to be responsible for ensuring that Bob Martin is running Thor Industries properly.

As we said before, none of the shareholders will be holding enough shares to really have that much of an impact on the way that the company is being run.

👉 The shareholders really just collect a paycheck. However, if they believe that any of the people that are running Thor Industries are not doing a brilliant job, then the shareholders can join up and suggest that something is done about it.

This message will normally be passed through to the chairman of the company (Peter Busch Orthwein) and he is meant to act as he sees fit.

👉 Each year, there will be an annual meeting of the shareholders. This is known as the AGM. Here, the shareholders will be able to let their feelings about the running of the company be known. There may also be some major decisions that are put to a vote of those at the AGM.

This may, for instance, mean discussions about whether the current people running the company are doing a good job.

Can You Buy Shares in Thor Industries?

If you wanted to be a part-owner in Thor Industries and, in turn, own a small stake in Entegra RV, then you absolutely can.

You just need to be able to find a stockbroker that is willing to sell you the shares. However, to be honest with you, you will never have that many issues finding a stockbroker.

They are pretty much everywhere that you look online, and even your bank may have that option.

👉 That being said, there probably is not going to be that much of a benefit when it comes to owning shares in Thor Industries. Sadly, nobody reading this article will be able to purchase enough shares where they are going to be having a major impact on the running of the company.

Just a couple of shares could set you back hundreds of dollars. You would need to be spending millions to gain enough shares to actually even have a chance of being heard at those annual shareholder meetings.

👉 If you own shares in Thor Industries, then pretty much the only benefit that you are going to be getting each year is a cut of the profits from Thor Industries. For a single share, this is likely to be nothing more than a couple of cents.

We do not wish to go into more depth than we have written here about owning a stake in Thor Industries. This is because we are not financial advisors.

If you seriously are considering owning a stake in Thor Industries, then you will easily be able to find a financial advisor to point you in the right direction.

Where Can You Buy Entegra RVs?

Because Entegra RVs are owned by Thor Industries, you should be able to purchase Entegra RVs at pretty much every dealership that offers Entegra RVs. That being said, it is unlikely that they are ever going to have any in stock.

This is because Entegra RVs are never going to be huge sellers for Thor Industries. They are also going to be quite large, which means that they will be taking up the spots where several other better-selling RVs can be placed.

You will also be able to order your RV here. Although, do bear in mind that it will often take several months for the product to be complete and delivered to you.

So, there you have it. Entegra Coach has a rather complicated line of leadership. However, it pretty much all boils down to the company being owned by Thor Industries, and it has been that way since the late 2010s.

link to Who Owns Jayco RV? 8 Facts You Should Know (Explained)

Have you ever wondered who owns Jayco RV? Well, we´ve got you covered. Jayco RV is a company that has been around since the 1960s. They are also a major source of employment in Indiana. As a...

Continue Reading
link to Who Owns Winnebago Industries: 7 Facts You Should Know (Explained)