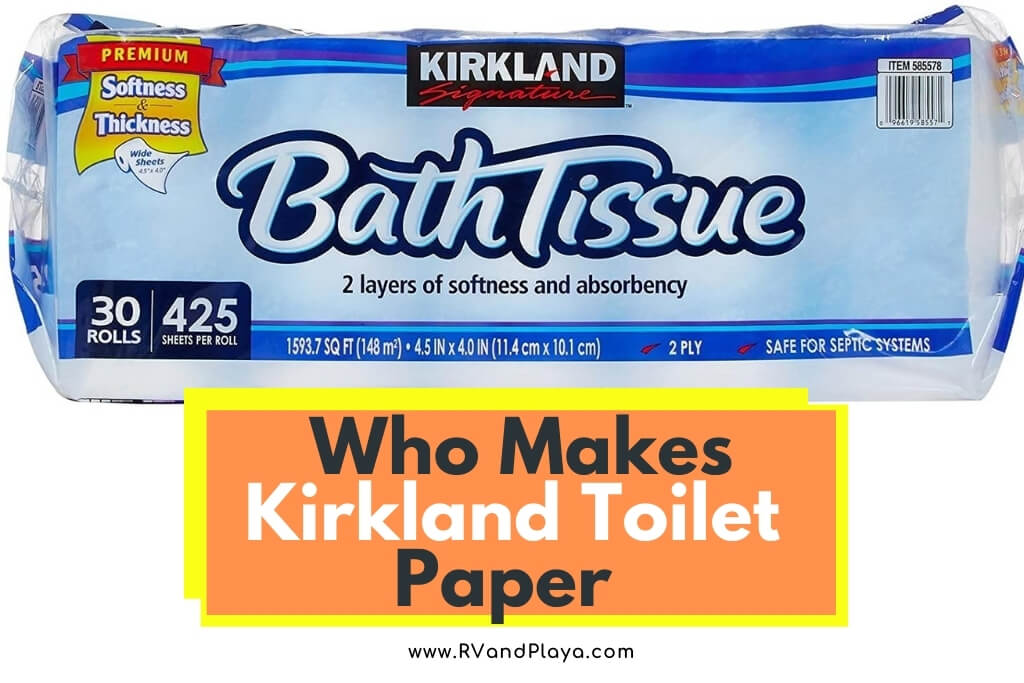 Have you ever wondered who makes Kirkland toilet paper? Look no more. We´ve got you covered.

America is the second-largest consumer of toilet paper globally and the industry that tallied up 10,4 billion US dollars in 2020 alone.

Although Kirkland toilet paper is one of the ten most popular privately labeled products at Costco and a trusted name in American bathrooms, the manufacture is shrouded in mystery.

Clearwater Paper Corporation is one of the companies that make Costco’s Kirkland toilet paper, although Costco protects manufacturer identities under the legal standpoint of trade secrets. Due to the sheer volume of Kirkland toilet paper sales, Costco likely sources the product from an extensive source of suppliers.

Costco protects the identity of its signature brand suppliers for obvious reasons in a highly competitive retail market. However ‘insider leaks are often behind the exposure of what brand lies under Costco’s unassuming Kirkland packaging.

If you wondered who may be behind the Kirkland toilet paper range, here are some facts explained.

Because Costco does not own any tissue manufacturing plants, they create technical standards that their suppliers must reach to reach Costo shelves.

Different manufacturers bid for Costco’s approval, and Costo conducts extensive tests of the manufacturers’ products against their specific standards.

According to Fox Business, Kirkland toilet paper is one of the top 5 selling items in Costo, bringing in 400 million a year. Some sources estimate the sales to be around a billion rolls a year, enough to wrap around the earth about 1200 times!

The sheer volume of Kirkland toilet paper makes it likely that Costo buys from a shifting roster of manufacturers.

The New York Times claims that most American toilet paper comes from North America, with about 10 percent imported from India and China. America has a strong domestic production of toilet paper, so imports count for only a small percentage of US toilet paper.

The largest toilet paper suppliers in America likely to supply Costco are:

The Clearwater Paper Corporation is reputedly one of the US’s most prominent suppliers and hails from Lewiston, Idaho.

Clearwater does not generally divulge the retail stores that place their products under their in-house labels; however, evidence suggests they are behind Costco’s Kirkland range.

Moscow Pullman Daily News noted a delivery of over 200,000 toilet paper rolls to Costco in March during the Covid crisis,

Shannon Meyers of the Clearwater company named Costco one of the stores to which the tissue manufacturing plant ships its products.

This one shipment in 2020, she explained as being more than the entire previous year, which is clear evidence that Clearwater is a regular supplier of Costco brand toilet paper such as Kirkland.

Click the link to Amazon and get the best Kirkland Toilet Paper Today!

According to its website, Clearwater is the largest supplier of private label toilet paper to retail grocery chains in the United States.

The Lewiston plant is the company’s largest and has the capacity to provide an ongoing and extensive supply to a chain such as Costcos.

However, they can by no means fulfill the requirements of the nationwide branches which makes it likely that they are one of the sources of Kirkland toilet paper only.

The mere fact that Costco conducts business with one of the larger tissue manufacturing plants also makes it likely that other large scale paper manufactures are also on their books,

Where Does Kirkland Toilet Paper Source Their Wood Pulp?

The most sought-after virgin fiber for soft toilet tissues is the Northern bleached softwood kraft (NBSK) pulp, making up between 20 and 40 percent of toilet paper in North America.

Most of the tissue pulp in the US comes from the boreal forests of Canada with vast tracts of birch, coniferous, and Aspen trees and coniferous trees in the southeastern United States.

Between 1996 and 2015, the logging industry consumed more than 28 million acres of boreal forests, roughly the size of Ohio. In 2019, the NDRC gave the brands such as Kirkland toilet tissue the lowest rating (F) in environmentally sustainable pulp sourcing.

In response, Costo amended their unsustainable pulp sourcing with both recycled and bamboo sources and 99.8% FCI, SCI and PEFC certified forest sources.

Under increasing pressure from the public and environmental protection agencies, Costco aims to have 100% certification for its products in the near future.

Who owns the Kirkland Label?

Costco owns Kirkland’s signature as a private label. The signature range began in 1992 when Costco named the range after their offices in Kirkland, Washington.

Subsequently, the Kirkland range established a reputation for quality at a lower cost and accounted for roughly a quarter of Costos annual $118.7 billion in annual sales.

Manufacturers who seek to take advantage of Costco’s rapid sales cycles enter into an agreement with Costco terms for non-exclusive production.

Costco makes its profits from selling memberships, and products such as Kirkland toilet paper are marked up sufficiently to cover rent, labor, and advertising.

The costs of operating as a private label manufacturer are lowered and allow Costo access to premium brands at a significantly reduced rate.

The selling company may also profit by offloading underproductive lines and, if performed well, stands to increase their price in the stock market. The high volume sales of the larger retail stores benefit the unnamed supplier.

As a result, these savings pass down to consumers who have access to high-quality products at lower prices. Thus both the consumer, retailer and manufacturer have something to gain from the process.

Why Does Costco Hide Their Kirkland Toilet Tissue Manufacturer?

Costco is notorious for hiding some of the brand names that form the basis of their signature Kirkland range, such as the Kirkland toilet paper. Costco does not produce, manufacture, or package the products in their Kirkland range.

In a groundbreaking court case, Citizens of Humanity, LLC v. Costco Wholesale Corp Costo defended their right to protect their supplier sources. In this case against Costco, a manufacturer claimed that Costo illegally sold their clothing range.

“Costco protects the identity of its signature suppliers, such as Kirkland toilet paper, to protect its suppliers and themselves from potential financial implications.”

If Costo divulged its suppliers, competing retailers might attempt to undercut their trade agreements.

Likewise, consumers who were sure of the Costco signature suppliers would opt for the lower-priced version, and the branded sales of the product would decline. This result would also obviously affect the branded labels manufacturer’s bottom line.

There is no wonder that signature brands such as Kirkland’s toilet paper are in such high demand.

Even though Costco won’t reveal their Kirkland sources, we can assume that Clearwater Paper Corporation is at least one of their local suppliers.

Have you ever wondered what the best certified septic safe toilet paper are? Look no more. We´ve got you covered. Every time you flush your toilet, the waste and toilet paper go through your...

Have you ever wondered what the worst toilet paper for plumbing or septic systems is? Septic tanks decompose waste from your home using bacteria. Most septic tanks can last many years, especially...