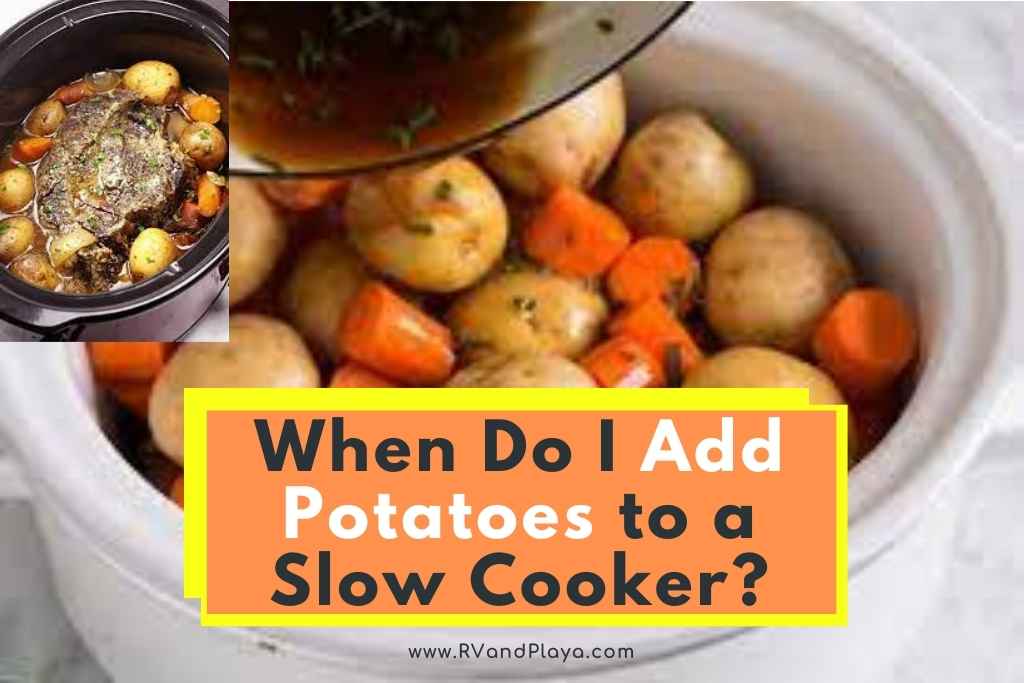 Do you know when to add potatoes to slow cooker stew? this is one of the questions our readers ask a lot. Well, we´ve got you covered.

If you are cooking potatoes with meat, such as in a pot roast or beef stew, add them whole at the beginning of cooking and then cut them up when your meat is tender. This will allow the potatoes to cook thoroughly without overcooking.

Figuring out when to add potatoes to a slow cooker can be difficult since potatoes cooked too long in a slow cooker will fall apart into mush if cooked alongside a roast or other meat for many hours.

That being said, potatoes cook beautifully in a slow cooker, achieving a nice tenderness and absorbing all the flavors of the surrounding foods.

Read on for some tips for adding potatoes to your slow cooker so you have a perfect potato every time.

When Do I Put Potatoes in a Crock Pot?

Beef stew isn’t beef stew without potatoes. But maybe you are skipping the beef altogether and making a delicious vegetable stew.

When adding a variety of vegetables, you have to be very mindful of the cooking time of each, so that they don’t overcook.

With a slow cooker, you want everything to be tender at the end, but don’t want to do too much extra monitoring or work. Plus, you don’t want to open the lid too much, because that will add to your cooking time.

Meat also cooks very differently from potatoes, which is why cooking them together at the same temp is so tricky.

Here’s the answer: add the potatoes and the meat at the same time, but leave the potatoes whole until the very end when the meat is tender and fully-cooked.

Read also: When Do I Add the Vegetables to My Slow Cooker (Helpful Tips)

How Do I Cook Potatoes in my Crock Pot?

If you are adding potatoes to a stew or roast, choose potatoes of around 2-3 inch diameter. Scrub them thoroughly and then add them whole to the slow cooker.

You do not need to put them under the meat (though you can).

If you are cooking on low heat and your meat or other vegetables will cook in a short amount of time, you may want to place the potatoes up against the edge of your crock pot, so they receive more direct heat.

When the meat is done cooking, remove the whole potatoes and let them sit for a little while until they are cool enough to cut up.

Cut into wedges or whatever size you desire and then add them back into the crock for a good stir. They will absorb all the good flavors you have created, plus they will look great and not fall apart.

Read also: How Long Do I Cook a 2lb Roast in a Slow Cooker? (New FACTS)

Can I Cook Potatoes in a Crock Pot Without Meat?

You may not even want to add meat and other vegetables. Potatoes cook great by themselves in a slow cooker, in a huge variety of ways.

If you are cooking only potatoes, you can quarter them and add them directly to the pot with a little oil, garlic, and seasonings for a nice side dish. Or add whatever flavors you like.

If you are making a roast or stew, just go with whatever temperature is indicated in your recipe. Potatoes will cook nicely either way.

If you are cooking on low, you may want to layer the potatoes against the wall of your crock as mentioned above, so they cook fully.

If you are cooking potatoes by themselves, you will want to stick with the recipe as well. If no temperature is indicated, you can cook them on high.

Should I Pre-Cook Potatoes for a Slow Cooker?

No need to pre-cook potatoes when you are putting them in a slow cooker! They will cook beautifully alongside whatever you are cooking or by themselves.

It may feel a little strange to add whole potatoes to the slow cooker, but it will be worth it.

If you are cooking just potatoes, don’t pre-cook. You want them to cook fully in the seasonings in your slow cooker, and you don’t want to overcook.

Read also: How Many Watts Does a Crock Pot Use? (Instant Pot® vs. Crock-Pot®)

What Potatoes Do I Cook in a Slow Cooker?

You can use any type of potatoes in the slow cooker. Small red potatoes have a nice flavor, can be used in a variety of ways, and hold up well in a slow cooker.

Or choose any other potato that is firm–such as Yukon or fingerling potatoes.

If you are using larger potatoes, you may want to cut them if you are cooking them by themselves.

What Do I Cook with Potatoes in a Slow Cooker?

Potatoes go well with a variety of vegetables, so you can’t really go wrong here.

You can add a variety of aromatics, such as carrots, celery, garlic, and onions, though you will probably want to saute them before you add to your slow cooker.

If you are making a vegetable stew, you can add other chunky root vegetables such as carrots and parsnips.

Cut into one inch sections and cook just like you cook potatoes. You can also add sweet potatoes for a nice variety and great nutrition.

Can you cook potatotes in a slow cooker? Absolutely! You may find that using a slow cooker becomes your favorite way to prepare potatoes.

There are a number of ways you can make potatoes as an easy, one-pot side dish, or you can simply slow cook your potatoes and add them to other recipes.

Do you know when to add vegetables to the slow cooker? What are the most helpful tips when cooking with a slow cooker? These are the questions our readers ask a lot. Well, we´ve got you...

Continue Reading
link to How Many Watts Does a Crock Pot Use? (Instant Pot® vs. Crock-Pot®)

Crockpots are a great way to plan and cook meals whether you’re traveling or at home, but many people will wonder how many watts they use.  It’s often hard to see the impact that crock...