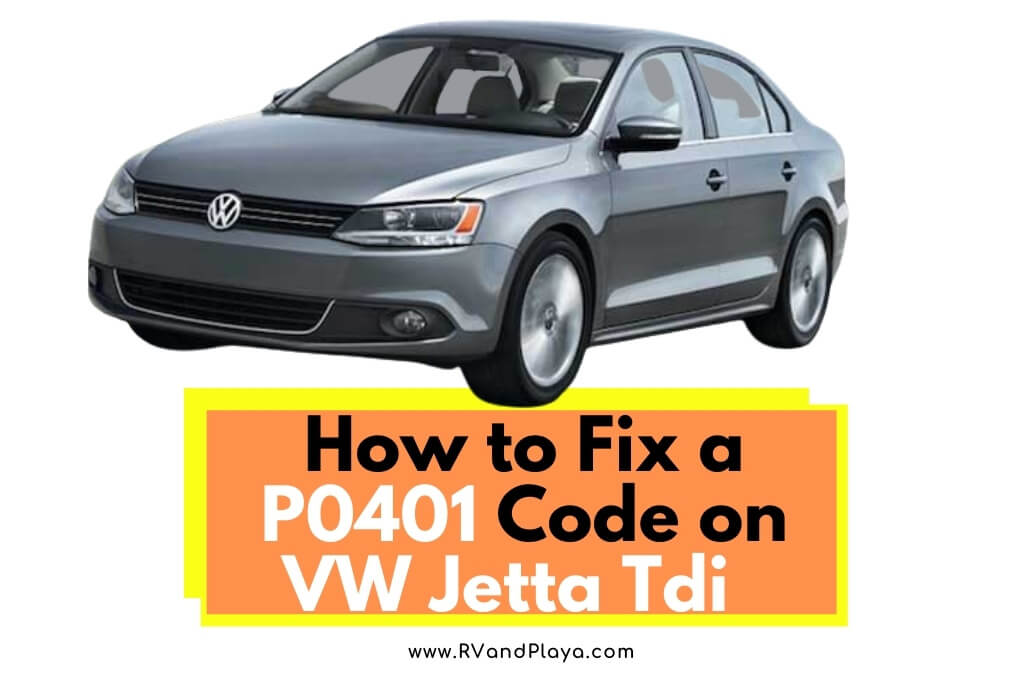 Do you know how to fix a P0401 code on VW Jetta Tdi? this is one of the questions our readers ask a lot. Well, we´ve got you covered.

The Volkswagen Jetta is one of the more popular German cars in America, but despite the widely lauded German engineering, it is not without the occasional problems.

Sometimes it can start running rough and surging, or starting with some knocking sound, and even start switching to the limp mode when you rev it high.

This is when you could think about reading the ECM codes and discovering there is a P0401 code stored.

To fix a P0401 Code on a VW Jetta Tdi, you need to follow the steps below:

Meaning: What is the P0401 Code on VW Jetta Tdi

The P0401 code (Intermittent P0401 EGR Code) is one of the standard OBD-II codes present on the Volkwagen Jetta.

It is related to the EGR system and the flow of recirculated exhaust gases.

Because all engines generate a certain amount of NOx during combustion and do so when the fuel is burned at certain temperatures, the EGR is used to combat the emission of this pollutant.

The function of EGR, or Exhaust Gas Recirculation, is to decrease the temperatures at which the fuel is burned in the cylinder.

It’s done by injecting some amount of exhaust gases back into the intake manifold.

Because the exhaust is rich in CO2, the air-fuel mixture will have less oxygen, and the temperature of combustion will drop.

For this system to work, there has to be a sufficient level of flow that is dependent on the engine RPM.

In case that this flow is sufficiently lower than the predetermined level, the code P0401 will be stored in ECM.

There are several potential causes of the code P0401 code on the Volkswagen Jetta Tdi.

The most common one is the faulty wiring of the EGR valve, simply creating a situation where ECM is not able to send commands to an electronically controlled EGR valve.

The next most common cause is the carbon buildup in the EGR valve, and either it is clogging the intake of the valve, which prevents the flow.

If the EGR valve is clogged, you can be certain that the intake manifold’s EGR port is also equally clogged.

Or the other moving parts of the valve are stuck because of the carbon buildup.

One more potential point of flow failure in the EGR system is the Exhaust Valve Control Modul, which also can be fouled by carbon build-up.

Lastly, the flow of the exhaust in EGR can be severely obstructed by carbon buildup in the DPF and EGR filters.

One thing you should have in mind when dealing with a P0401 code on the VW Jetta is that it can be caused by several things at the same time.

Reading the P0401 on VW Jetta Tdi is a very simple thing to do.

To do this you will need an OBD-II scanner, and it doesn’t need to be a professional handheld device.

Even the affordable ones, that connect to your phone or laptop over the Bluetooth connection are good enough.

To read the code your next step is to locate the OBD-II connector.

It is located, on newer generations, on the underside of the dashboard in the vicinity of the lights switch.

On the left side of the steering wheel, there is a switch for adjusting lights height depending on the number of occupants, for turning on the fog lights, and so on.

In the older generation, it is located behind the plastic cover right above the cigarette lighter, or right under the AC controls.

Once you have plugged in the OBD-II scanner in the port, all you have to do is to press the button or key labeled as Scan.

This will initiate the scanning of all codes stored in the ECM.

Troubleshooting any problem means checking one by one the potential causes for it.

That’s not different when dealing with the P0401 code on a VW Jetta Tdi.

Step #1 Check EGR valve wiring: The most common, and very often overlooked potential cause of this code is the wiring of the EGR valve.

There are various ways that this harness can be pinched and broken, and it happens usually right in the middle.

Once this happens, the ECU is not able to send commands to the EGR valve to open, and the flow is always insufficient.

If you have at least basic soldering skills, you can quickly repair it, and safely tucked it away near the firewall.

Step #2 Check EGR valve and intake manifold: Depending on the exact generation of your Jetta, to inspect the EGR valve you will either have to remove just the exhaust recirculation hose or the throttle body also.

Once you do it, you can inspect the valve for fouling and carbon buildup.

If there is a lot of fouling you will have to clean it, but also the intake manifold, especially if it is a diesel engine.

For cleaning, you can use almost any strong degreaser, brake or carburetor cleaners, but for diesel engines, oven cleaners work the best.

Almost always the problem with it is the carbon buildup and the lack of lubrication of its spring and shaft.

To lubricate it, you should use a high-temperature synthetic lubricant, but if its motor is dead it needs to be replaced.

Step #4 Check Exhaust valve: Inspecting the exhaust valve right after the DPF filter if your Jetta has a diesel engine will tell you whether the DPF and EGR filters are so much fouled that they have to be replaced.

Right after the DPF filter, on the exhaust pipe, there are three holes, two smaller ones are for the exhaust temperature and O2 sensor, while the third larger one is the exhaust valve.

Just swiping a rag, paper towel, or even a finger on its inside will tell you a lot about its state.

If there is soot, both DPF and EGR filters have to be replaced, and the regeneration cycle must be initiated by driving for 10-15 minutes at 40-50 mph in 4th or 5th gear.

The nature of the P0401 code is such that it is not much you can do to prevent it from happening.

The exhaust gases, especially diesel exhaust contain various particles that come from incomplete combustion, and they tend to stick on cast metal surfaces.

But, you can make sure that all potential causes are checked and fixed when it does happen.

You can expect this to happen on about 200,000 miles, and if not all causes are fixed it will be coming back every few miles if not sooner.

On diesel engines, one thing can considerably decrease this time, especially on the 6th and 7th generation.

That is the use of biodiesels, which is not recommended anyway for other reasons, but it does increase the soot load and after regeneration, the EGR filter will get fouled very quickly.

Repairing the P0401 code on Volkswagen Jetta Tdi can be either very cheap or very expensive.

If the EGR valve and intake manifold need to be cleaned, it will cost you some $2-$3 if you do it yourself.

In case that the DPF and EGR filters need replacement, it can cost up to $4,800 in a dealership, if it’s not covered by warranty.

Dealing with the P0401 on Jetta can be frustrating if you or the mechanic you entrust with fixing it doesn’t check for all potential causes.

Besides this, it can be very expensive to fix.

One thing you can count on is that it will not happen very often, and in a normal situation, it shouldn’t come up sooner than every 200,000 miles. Do you know how to fix a P0401 Code on a Ford vehicle? this is one of the questions our readers ask a lot. Well, we´ve got you covered. Many Ford vehicles are notorious for somewhat persistent...

Do you know how to fix P0304 code for VW Jetta, Beetle, Gti, Passat, or Tiguan? this is one of the questions our readers ask a lot. Well, we´ve got you covered. Sometimes it can happen that your...