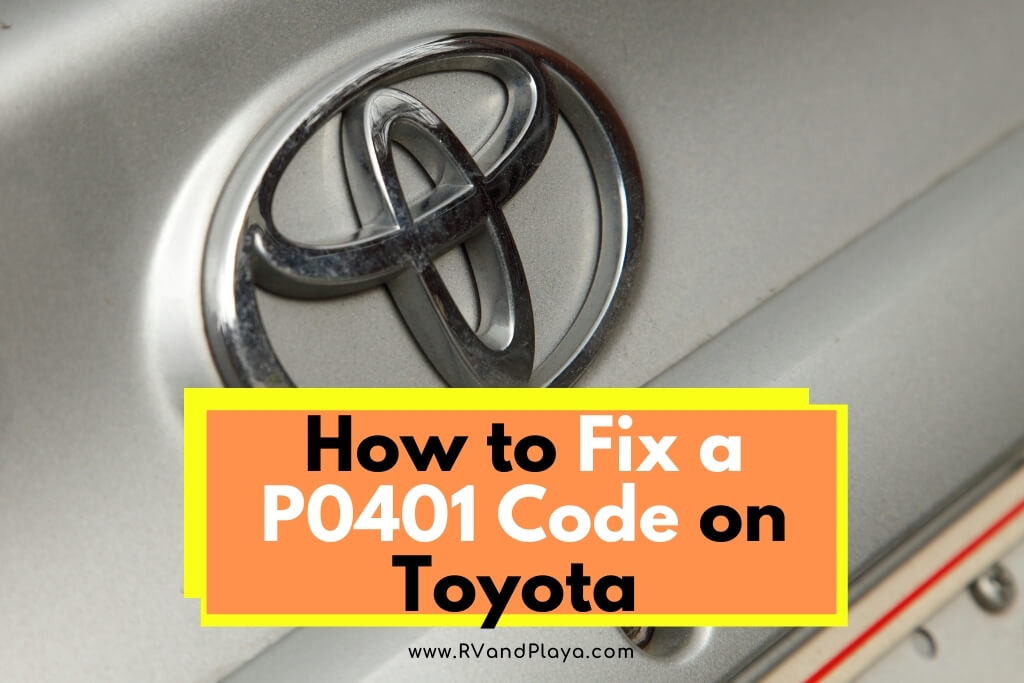 Do you know how to fix a P0401 Code (Insufficient EGR Flow) on Toyota for the models like Camry, Corolla, Prius, Tacoma, RAV4, Tercel, Avalon, and Land Cruiser? this is one of the questions our readers ask a lot. Well, we´ve got you covered.

One of the symptoms that something could be wrong with your Toyota, besides the check engine light is on, can be a sluggish start when the engine is cold.

In addition, you could hear some kind of knocks when cranking, or even the engine be sluggish to pick up the acceleration.

This could lead you to have the ECM codes read and to establish that you are having a P0401 code stored.

So, how to fix a P0401 Code (Insufficient EGR Flow) on Toyota for the models like Camry, Corolla, Prius, Tacoma, RAV4, Tercel, Avalon, and Land Cruiser? To fix the P0401 code on Toyota vehicles, you need to follow the steps below:

Meaning: What is the P0401 Code on Toyota

The P0401 code (Insufficient EGR Flow) is one of the many standard OBD-II error codes, and it means that there is some problem with the EGR system.

EGR or Exhaust Gas Recirculation is the system for cleaning the exhaust gases by decreasing the level of NOx generation during combustion.

It works by diverting some of the exhaust gases back into cylinders, by the way of the EGR valve connected to the intake manifold.

The effect of this is less NOx produced during the combustion.

The simplest way to control this process is by measuring the flow of gases through the EGR system.

If the flow drops below a certain point, code P0401 happens.

In general, this means that the production of NOx in your engine is not decreased, as the exhaust gases are not recirculated at the desired rate.

While this situation will not create problems with your Toyota in the short run, eventually will cause you to fail the emission test.

TOYOTA P0401 EGR INSUFFICIENT FLOW >> Check out the video below:

When it comes to Toyota vehicles, there are several potential causes of the code P0401, so let’s cover them from the most common ones.

The most common cause of this error code is a failed vacuum switching valve or VSV for the EGR.

This device is used to switch on and off the vacuum supply of the EGR valve, which it needs to operate.

Failure of VSV will prevent the EGR valve to open which then obstructs the flow of recirculated exhaust gases.

The next most common cause of the P0401 code is the EGR vacuum modulator, which is a device that controls how much EGR valve is opened.

In case that it fails, the EGR valve will not be opened as much as is it is instructed by ECM, so it will also produce a lower flow than expected from the setting and signals to the EGR system.

Because the exhaust gases contain various particulates, over time they can clog the EGR valve and intake manifold ports, which will lead to code P0401 happening.

The last two potential causes can be a lack of vacuum for controlling the EGR vacuum modulator because of clogged throttle body vacuum ports or faulty rubber hoses.

Read also: How To Fix P0304 Code For Toyota Vehicles

Reading the OBD-II diagnostic codes on Toyota vehicles is a very simple procedure.

To do this you will need any kind of OBD-II scanner, there is no need for expensive professional ones.

Small, affordable ones that can be found on almost any e-tailer’s website and connect to a mobile phone, tablet, or laptop through a Bluetooth connection are good enough.

What you need is to connect your OBD-II scanner to the OBD-II port located under the dashboard, usually just to the right from the trunk release catch.

Nex thing you should do is to actually scan codes.

Depending on whether you are using a hardware or software scanner, you will need to either press a physical Scan button or click on the one in the app’s interface.

Once you do it, you will get all of the stored codes listed on the screen of your scanner.

To fix the P0401 code on your Toyota, you will need to follow these steps, even though you may fix it before exhausting them all, it is better to follow them through.

The P0401 code can have a single or multiple causes on Toyota’s, so it’s always better to check for them all.

Step #1 Check VSV valve: The most common cause of the EGR flow problems is a faulty VSV valve.

To test it you will need power leads with alligator clips, which you need to two terminals instead of its wiring harness.

Red lead you should attach to the bottom terminal, and black to the upper one, and then touch with the other ends red to positive and black to negative terminal of your battery.

If the VSV valve is good, you will hear it clicking when you close the circuit.

With a T splitter, you need to split the hose coming from the port labeled with Q.

When you turn on your engine and rev it, the vacuum pump’s manometer will measure the vacuum if the modulator is good.

Step #3 Check EGR valve: To test the EGR valve you will need a vacuum pump that you will connect to the top port on the valve.

Once connected you need to turn the ignition on and pump the vacuum.

If the valve is working properly, the engine will stall very easily.

To check for this you will need to have the engine running and to remove both hoses going from the throttle body.

If you cover these ports with fingers and then rev the engine if they are clean you will feel vacuum sucking on your fingers.

Step #5 Check vacuum hoses: Very rarely, any element of the EGR system can fail to work properly due to a vacuum leak on the hoses.

To check this you will need to visually inspect all of the rubber hoses connected to parts you have inspected in previous steps and replace any if needed.

On Toyota’s P0401 is one of those problems that are bound to happen eventually.

Many of the parts that make the EGR system, unfortunately, have a finite life span, predicting or preventing such failures is just simply impossible.

What you can do is to make sure that you have checked for all potential causes once it does happen, and that way preventing it from becoming a persistent problem.

Depending on the exact model of your Toyota vehicle the repair of the P0401 error code can range between $150 and $700.

If you decide to entrust it to a dealership or a mechanic shop.

Depending on the exact cause, it can take between one and two hours of labor to fix it, while parts can range from $80 to $550.

While Toyota is world-famous for making vehicles that very rarely break, many parts of them have a limited life span.

This is the main reason behind the fact that your vehicle is bound to throw the P0401 code at some point during its life.

With few tools, you can relatively easily fix this problem by yourself.

But if you do so, you should be careful to check all potential causes, as the P0401 is known for becoming a persistent problem.

The main reason for this persistency is that it can be caused by several causes at the same time, so fix one of them will not be the complete repair.

Do you know how to fix the P0304 code for Toyota vehicles (Camry, 4Runner, Corolla, Prius, Tacoma, Sienna, Tundra, or Rva4)? this is one of the questions our readers ask a lot. Well, we´ve got you...

Do you know how to fix a P0401 code on Mitsubishi? this is one of the questions our readers ask a lot. Well, we´ve got you covered. Sometimes it can happen to you that the check engine light...