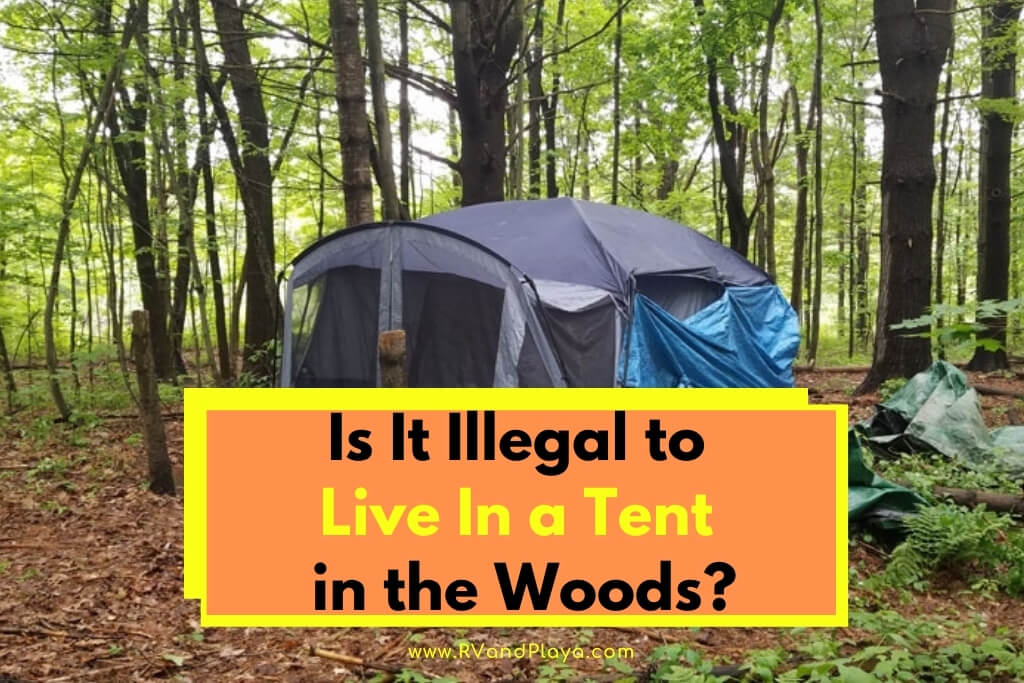 Have you ever wondered if it is illegal to live in a tent in the woods? Look no more. We´ve got you covered.

As you probably well know, the hustle and bustle of modern life is not for everybody. Some people want to get away from the world of social media, nine to five workplaces, and boring old homes.

If this is you, you may be considering your options and think that simply living a simple and pleasurable life in the woods would be best.

There’s only one problem.

Is it even legal or illegal to live out in the woods in a tent? So, yes! It is completely legal to live in a tent in the woods, provided that you know how to do it safely and legally, within the guidelines set up by the federal or state government (depending on what land you end up staying on).

Read on to find out where and how it is allowed for you to live in nature, away from the modern grind.

Whether or not you are legally allowed to live in a tent in the woods is actually a more complicated question than you might think.

This is due to how laws regarding land are set up. A lot of whether or not you are able to set up shop in the woods and stay indefinitely depends on where you live and how you do it.

No matter the reason you want to live out in the wilderness, there are a number of ways you can realistically accomplish that goal.

Read also: Can You Live in an RV Park? Here’s Exactly What To Expect

States Where You Can Live In The Woods Legally

The first issue one may run into when attempting to live in the woods is that they’re not sure where to begin. It’s a big world out there, after all, and its completely covered in forests!

That being said, some are better than others when it comes to starting your outdoor life.

Most of the wilderness in the United States is in the western part of the country. States like:

to name a few, are riddled with massive stretches of undisturbed forest and wilderness, barely touched by humans for hundreds of years, save a park ranger here and there.

This makes these lands easily the best for setting up your tent and making your forest home. However, this is easier said than done, as there are a lot of rules and caveats to how and where you can live in the woods.

Below you can find 10 of the most popular American Wilderness Areas:

The issue with picking up and moving out into the woods is that most of the woods in the United States are considered public land.

Although it might look like “public land” means “land the public can use,” it actually means that it’s owned by the state or federal government.

Unfortunately for aspiring adventurers looking to settle down on a small piece of undisturbed forest, this means that setting up a home here is technically considered squatting, or in more legally accurate terms, trespassing.

In some cases, this can be overlooked by park rangers and the bureau of land management, or BLM. However, it is risky to depend on the kindness of strangers and government bodies to leave you well enough alone.

If you don’t feel comfortable or safe, there are ways to make it completely legal to live in the woods in a tent.

The first and perhaps the most obvious way to secure the safety and legality of your makeshift forest home is to buy a small (or large) piece of land for your tent to be set up on.

Now, you may be thinking “Do they just sell pieces of the forest to people?”

Startlingly enough, it turns out, the answer is actually yes! The bureau of land management sometimes sells land that is part of a national park or another piece of public land to private citizens.

👉 If you have the money to buy a piece of this land, it can be a perfect place to live in the woods legally, undisturbed by not only the high pace and high demand of the modern world, but also by pesky park rangers and government agencies.

Unfortunately, buying land from the bureau of land management isn’t always the easiest or cheapest thing, and they aren’t always selling.

You could also look to buy land from a private seller. It may be harder to find land that is completely undisturbed and total wilderness, but folks are always selling pieces of forest.

👉 A cursory google search will allow you to find any number of acres of private forest for yourself to live in completely legally.

However, not everyone has the cash on hand to just buy land outright. For those of us who need a cheaper option for their wilderness lifestyle, there are solutions!

So, earlier it was mentioned that you’re technically not allowed to squat or trespass on public land. And that is still true. However, there are ways to get around this rule completely legally.

Most national parks and other public forests have a rule that says you may only camp for fourteen days before having to move.

After that, park rangers are within their rights to remove you and your tent from the publicly owned land.

However, who’s to say you can’t simply pick up and move after the fourteen days? Turns out, you can! This is completely legal, although there are rules in place for it.

👉 Firstly, you aren’t allowed to stay for more than two weeks. We’ve covered that already. However, it is highly unlikely that a park ranger or other government official is counting the days you are camped out for, so this is more of a guideline than anything else.

Still, you should follow this rule to remain out of trouble.

👉 Second, you are not permitted to build permanent or semi-permanent structures on public land. This shouldn’t be a problem if you only plan to use a tent and other camping materials that can be easily disassembled and moved.

If you plan on building a cabin or other kind of permanent shelter, then this becomes a problem, especially because that’s the kind of thing you can’t really hide for too long.

If you are caught building on public land, you can be removed from the land immediately, so be careful.

👉 Lastly, you are supposed to move at least twenty-five miles away after the two weeks have expired.

Again, this is a difficult rule to enforce, so don’t freak out about measuring an exact twenty-five-mile distance from where you’d previously set up camp. It could very well be that no one even knew where you started in the first place.

Just move every once in a while to avoid getting in any trouble.

Park rangers will more often than not warn you that you’ve been in the same place for too long before doing anything drastic like calling the police or removing you from public land completely.

There are multiple ways to get it done, but in the end, it’s all the same.

Whether you buy a piece of government land, private land, or just camp out and live the life of a roaming nomad in a national park, you are still experiencing the freedom of living in the wilderness away from the grind of modern life… completely legally.

Lindsey, do you know what Oticon hearing aid warranty is? This is one of the questions my readers ask a lot. Well, I´ve got you covered. The most incredible hearing aids for internet connectivity...

Continue Reading
link to Are Backpacks Allowed At Six Flags? (All You Need To Know)

It might be a little confusing to figure out the regulations for what you can and cannot carry into each theme park while attempting to organize your trip. At Six Flags, all bags—backpacks and...