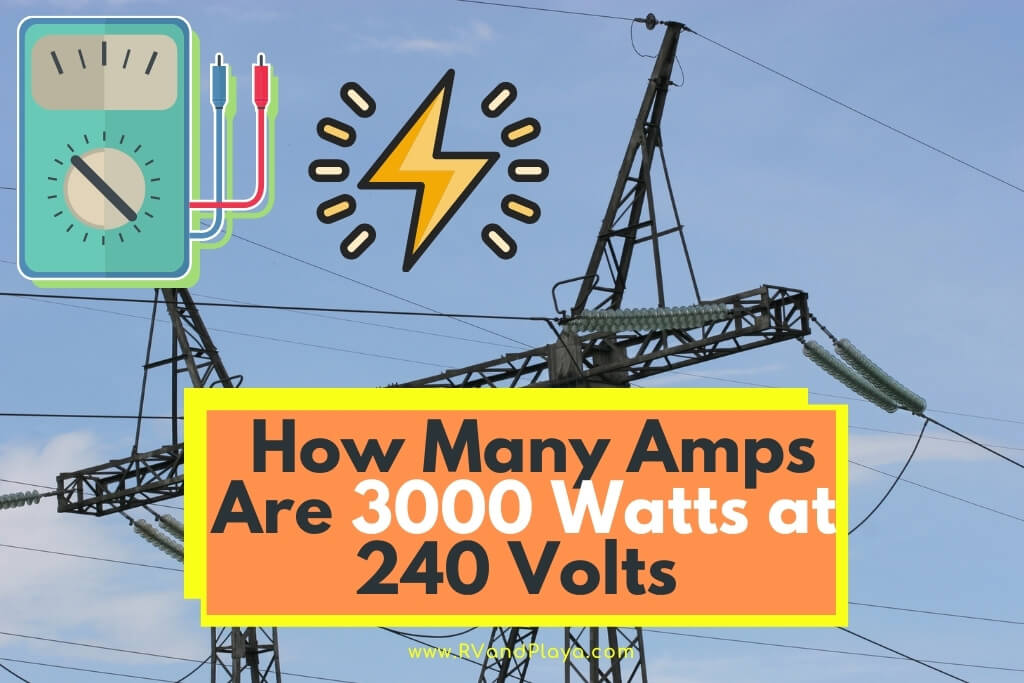 Have you ever wondered how many amps 3000 watts at 240 volts is? Well, look no more. We´ve got you covered.

If you sometimes feel mystified about how your electricity works, don’t feel alone. It is easy to be confused when you face a barrage of formulas that you can’t decipher.

Although it’s easy to google an answer or click on an online calculator, it is so much more satisfying when you can do it yourself.

3000 watts at 240 Volts is 12.5 amps, but the fact is, beginners should know that they can calculate amps, volts, and watts easily themselves. By simplifying the basic concepts of an electrical circuit (and a simple Ohm’s Law crib), you can figure out the amperage on any electrical DC system.

If you can’t tell your watts from what or how amps, volts, and watts work together, here is a simple way of understanding your basic electricity so that you can calculate amperage on your own.

When discussing electrical systems, the four basic terms you will encounter are:

Each of these four quantities has its unit of measurement, which are as follows:

Your battery is like a water pump that pushes water through the pipe, and as the pump increases pressure, the water begins to flow.

You may think of voltage as the pressure that pushes water through a hosepipe.

Seen in electricity terms, electricians refer to this electrical pressure as voltage and measure it in volts.

The continuous flow of electrons through a conductor such as a wire creates electricity. We measure this flow rate as electric current much like the flow rate in a surging river, which is also called current.

Read also: How Many Amps Does A 200w Solar Panel Produce? (Explained)

Ohms may be seen as the amount of resistance in your water system, something like sand in your hose pipe.

Resistance refers to the tendency of your electrical system to resist the flow of current. You may think of it as water at the same pressure flowing differently through an open tap compared to a narrow hose.

Even though the pressure is the same, the narrow hose resists the pressure because the same volume of water cannot flow through the hose as the open tap.

Ohms are the basic unit of resistance in your electrical system and are represented as Ω.

You may imagine that power is like the volume of water flow from the hose at a given pressure ( voltage) and diameter(resistance.)

A simple circuit with a battery and a light bulb would shine more brightly as the wattage increased.

Read also: How Many Amps Does a Refrigerator Use? (6 Examples)

There is a particular law that governs calculations within an electrical system called Ohms Law. Don’t worry, Ohm had no formal scientific education either, according to history, so there is hope for us!

Ohms law points out the primary relationships in electrical systems, which is that for a given resistance, the current is directly proportional to voltage.

In this formula, V stands for voltage (in volts), is equal to I, which means current (measured in amperes or amps), and R is resistance measured in ohms.

Simply put, the electrical power or wattage is always the same as the voltage multiplied by the current (amperage).

Ohm’s formulas show how voltage amps, watts, and ohms interrelate and the handy fact that if you know any two of these values, you can calculate the third value. A straightforward way to describe the relationship without delving into even more equations is:

This diagram is a simplified version of how voltage, amperage, and watts relate to each other in a circuit. The triangle represents the fact that if you have any two given measurements, you can work out what the other one will be.

To try this simple diagram of Ohm’s Law for those of us not blessed with electrical engineering know-how) use this example to try out what you have learned.

Just bear in mind, we are using straight DC watts to amps calculation, and the formula would be different for AC single phase and AC Three Phase Calculations.

For instance, if you were trying to calculate the watt value, you would cover up what you are searching for, in this case, the W for watts at the top of your triangle, and you would be left with V (voltage) multiplied by A (Amperage.)

So if you had a 12v battery and your lamp drew 5 amps of power, you would calculate as follows:

Read also: How Many Amps Does a 40 Inch TV Use? (LED TV Wattage)

To Calculate the Volts

Now that you have calculated your wattage and know your lamp operates at 60 watts, you can reverse calculate the voltage (which we already know, but let’s pretend.)

To calculate the voltage of a system, you would cover up the V corner of the triangle and be left with W (watts) divided by A (Amps), so you would calculate as follows:

Look at your triangle again and cover up the measurement you seek, in this instance, the corner with an A (Amps) on it. You will be left with W(watts) divided by V(voltage.) the calculation would go as follows:

Now let’s tackle the question posed in the title of the article.

If we loom at our triangle once more and cover up the A point, we are left with W (Watts) divided by V (Volts). So our calculation would look something like this:

It seems a lot more simple when you understand the essential components in your electrical system.

If you are someone who struggles to understand this: I(A) = P(W)/ V(V) as an explanation to calculate amps, don’t feel alone.

Just take a deep breath and try to understand the basic concepts behind all the confusing formulas, and you will be able to make your own calculations using your trusty triangle in no time at all.

link to How Many Amps Does a Refrigerator Use? (Here´s How to Find Energy Usage)

How many amps a refrigerator uses determines how you can configure your electrical installations and how much additional load you can place on some electrical breaker. It makes no difference...

Continue Reading
link to How Many Amps Does A 200w Solar Panel Produce? (Explained)

Have you ever wondered how many amps does a 200-watt solar panel produce? Look no more. We´ve got you covered. is a fantastic idea if you are planning on being eco-friendly. It can also save you...