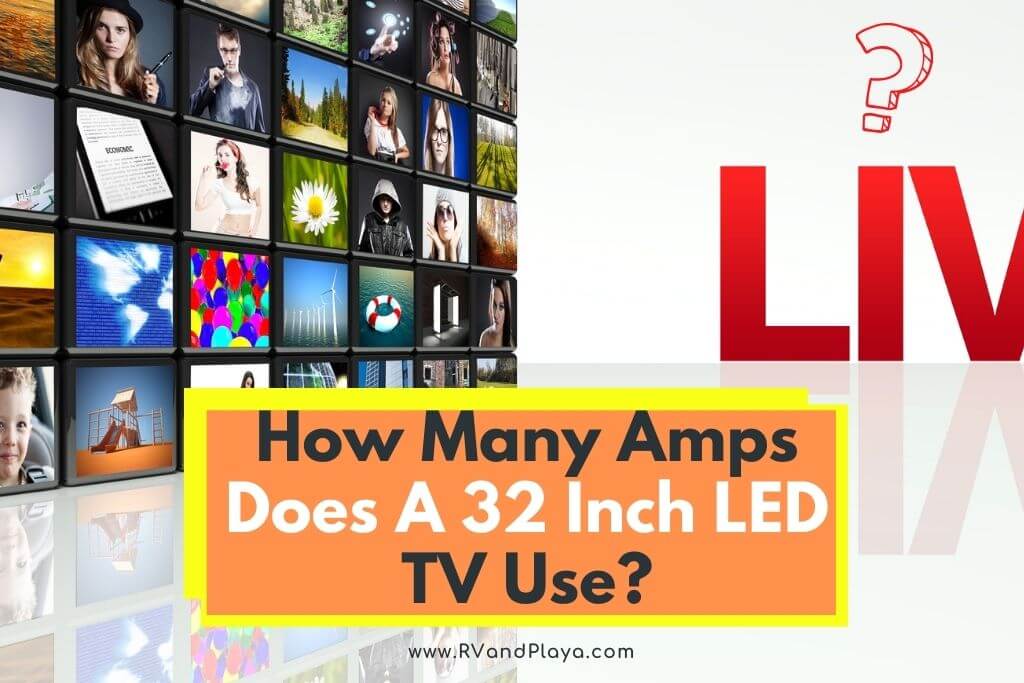 Have you ever wondered how many amps does a 32 inch LED TV use?

Depending on the application and the power source, you can be very limited when choosing what you can use as a power source for some device. Among devices that have very low amperage are TV sets.

Because of this, they can be deployed almost anywhere. Not just in households where electric circuits provide them with several times the needed amperage, but also in the off-grid settings, RVs, and the likes.

Under some conditions, you can even make a rig that allows you to have a TV set in a tent powered by a car battery.

How Many Amps Does A 32-inch LED TV Use?

How many amps will a 32-inch TV set draw from an electric circuit depends first on the particular type of technology of employing the LEDs in the construction of the TV screen.

Older types have one or two strips of LEDs along the edge of the screen providing more or less uniform backlight for it.

On average such a TV will have 0.34 maximum amps rating but depending on the model and manufacturer it will range from 0.16 to 0.7 amps.

Newer ones with local dimming LEDs have arrays of LEDs across the whole backside of the screen. Depending on the make and model, they can have 10, 100, or even 1.000 dimming zones.

This can increase maximum power draw up to 50% compared to edge backlight type, but in real exploitation are actually more efficient ones.

How Many Watts Does a TV Use? The table below shows the average wattage of modern TV:

32-inch TVs are very common and depending on the technology, 32-inch TV requires the following watts:

How To Find Out The TV’s Amperage?

In case that you need to know the amperage of your TV set, but it is not stated anywhere in its documentation, or you have lost it, you shouldn’t despair, it is very easy.

TV sets on their back usually have either the maximum or usual power rating in watts printed on the back.

In case that the maximum is present, all you have to do is divide that number by 120 volts. The result is the maximum amperes your TV set can draw.

Under normal conditions of watching TV, depending on how many colors the image has, what is the brightness and volume settings, the actual power draw can vary between 40% and 60% of this number.

In case that your TV set only has the annual power consumption rating printed on it in kWh per year, you will not be able to precisely calculate the maximum amps, but you will be able to establish a ballpark figure.

To do so, you first need to convert this number to watt-hours by simply multiplying it by 1,000 because there are a thousand Wh in one kWh.

The small print on the energy label always states that the energy consumption is base on typical X hours of use per day.

If you divide the daily Wh consumption by this number of hours, you will get the typical wattage of your TV. In this case, it is 5 hours of use, which makes the typical draw ~46.71W.

Dividing this number with 120V, you will get the typical current draw in amperes, which for this TV set is ~0.39 amps.

This measurement is established by testing the TV sets out of the box, by playing a test TV signal on them and measuring the power draw over a certain period of time.

While it is a relatively realistic representation of real-world power consumption, it is between 15% and 25% below the maximum power draw of a particular TV set.

How Many Amps Does a TV Use

On average smart TV will draw around 1 amp per hour.

How Many Amps Does a TV Use >> Check out the video below:

The simple truth is that they do not always draw the maximum amount of current or power.

How much power they actually draw depends greatly on the image they are showing at any given moment, and as the image changes, the power draw slightly fluctuates with it too.

But the highest variance of power draw comes from the setting of the brightness of a screen. Depending on the exact model of LED TV, just the backlight of the screen can amount to 90% power consumption and power draw.

So, if you decrease the brightness to 50%, you can decrease both draw and consumption by nearly 45%.

Decreasing the brightness to 50% will not lower the overall draw to 50% because your TV has many more parts that consume electrical power.

Firstly, every TV has speakers, but most modern TVs have other devices integrated into them that are also consumers, such as WiFi capabilities, Bluetooth, and so on.

Can A 32-inch TV Be Powered From A Battery?

TV sets are first and foremost household appliances, which is why they are designed to primarily run at 120 or 230V, while many can actually run on either of these voltages.

Some smaller specialized TV sets can even be directly powered by 12 or 24V, which makes them able to run on either a deep discharge battery or a car battery.

Though “normal” TVs can’t run on 12 volts battery per se, with a power inverter they can be run on battery without any problems.

TV sets are generally very small consumers, especially the smaller ones like ones with a 32-inch screen diagonal. When it comes to LED TVs, the “big” ones rarely draw above 0.5 amps.

Are There LED TVs That Draw More Than 1 Amps?

To find an LED TV set that draws more than 1 ampere of current, you need to be looking at some older and power inefficient ones with a screen diagonal of 55 or more inches.

Though for them the average power draw is actually more often in the range of a reasonable 0.65 to 0.7 amps.

And to find an LED TV with the power draw around 2 amperes, you need to be looking at models with 80 or more inches screen diagonal. But same as with 55-inch LED TVs, those are rare, old, and discontinued models.

These days, even very big TVs have become very energy efficient, and rarely need more than 1 ampere of current.

Because the TV screen is the biggest consumer, power draw does correlate with its size, though not perfectly.

There have been many advancements in the power efficiency of the LED screens in the last two decades, and on average newer LED screens draw around 40% of what their predecessors used to.

Thus, you will rarely find an LED TV that draws more than 1 amp of current.

A 32-inch TV set is a surprisingly small consumer of electrical energy. Many people erroneously, due to TV set size, presume that TVs, in general, consume high amounts of power and draw very high currents.

The reality is that most modern LED TVs are very economical, drawing no more than 1 amp. When it comes to 32-inch screen TVs, that number is closer to 0.34 amps.

How many amps and watts do household appliances use? >> Check out the table below:

Power Consumption of Typical Household Appliances >> Check out the video below:

link to Does Turning Off Router Affect Speed? (Here Is Why)

Have you ever asked yourself or your friend if turning off the router affect the speed or will rebooting your router speed up your internet? Well, you are at the perfect place to find the answer to...

Continue Reading
link to Is It Okay to Unplug the Router Every Night? (Do This Instead!)

Do you know if it is ok to unplug the router every night or if is it bad to turn off your modem every night? Well, you are at the perfect place to find the answer to such a question. You may have...